Brokerages expect that Regions Financial Corp (NYSE:RF) will post earnings of $0.33 per share for the current quarter, Zacks Investment Research reports. Twenty Three analysts have made estimates for Regions Financial’s earnings, with estimates ranging from $0.31 to $0.35. Regions Financial reported earnings per share of $0.25 during the same quarter last year, which suggests a positive year over year growth rate of 32%. The company is scheduled to announce its next quarterly earnings report before the market opens on Friday, July 20th.

According to Zacks, analysts expect that Regions Financial will report full year earnings of $1.40 per share for the current financial year, with EPS estimates ranging from $1.36 to $1.45. For the next year, analysts anticipate that the business will post earnings of $1.54 per share, with EPS estimates ranging from $1.47 to $1.65. Zacks’ EPS averages are a mean average based on a survey of sell-side research firms that that provide coverage for Regions Financial.

Regions Financial (NYSE:RF) last released its earnings results on Friday, April 20th. The bank reported $0.35 earnings per share for the quarter, topping the Zacks’ consensus estimate of $0.31 by $0.04. Regions Financial had a net margin of 22.06% and a return on equity of 8.75%. The firm had revenue of $1.42 billion for the quarter, compared to analyst estimates of $1.44 billion. During the same period in the prior year, the firm earned $0.23 earnings per share.

The company also recently disclosed a quarterly dividend, which was paid on Monday, July 2nd. Stockholders of record on Friday, June 8th were issued a $0.09 dividend. This represents a $0.36 annualized dividend and a dividend yield of 2.05%. The ex-dividend date of this dividend was Thursday, June 7th. Regions Financial’s payout ratio is currently 36.00%.

Regions Financial Corporation, together with its subsidiaries, provides banking and bank-related services to individual and corporate customers in the United States. Its Corporate Bank segment offers commercial banking services, such as commercial and industrial, commercial real estate, and investor real estate lending, as well as equipment lease financing services and corresponding deposits. 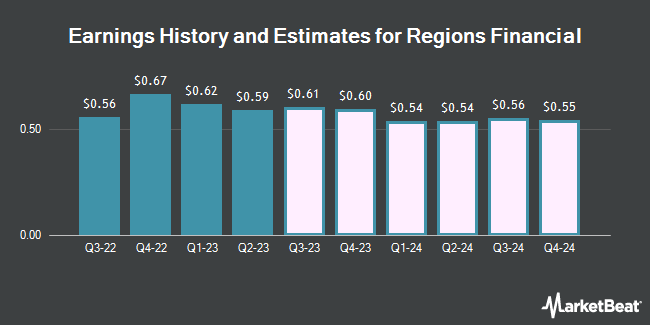