U.S. regulators have spent much of the past decade trying to get a better handle on beleaguered Deutsche Bank AG. A wild trading day earlier this year shows how hard that will be.

Traders at the German lender’s U.S. unit suffered a one-day loss in the first quarter that was 12 times what internal risk officers estimated for regulatory purposes it might lose on a typical day, according to a previously unreported May filing. Deutsche Bank’s U.S. trading loss was offset by related gains in London, according to people with knowledge of the bank’s operations.

The U.S. loss — unrivaled in other banks’ first quarters and the unit’s own recent history — didn’t warrant a mention in Deutsche Bank’s earnings report. But it raises questions about U.S. regulators’ ability to have an accurate picture of a foreign bank’s operations if metrics such as value-at-risk, or VaR, show only a fraction of potential trading exposure. The issue is particularly stark at Deutsche Bank, which has increased capital levels at its U.S. business after multiple failed stress tests and cease-and-desist orders.

"Even a loss of two or three times VaR on a given day is unlikely. Twelve times VaR is extraordinarily unlikely," said Andrew Lo, a finance professor at MIT Sloan School of Management, speaking generally of trading losses.

Deutsche Bank's U.S. unit had a trading day that stood out from peers 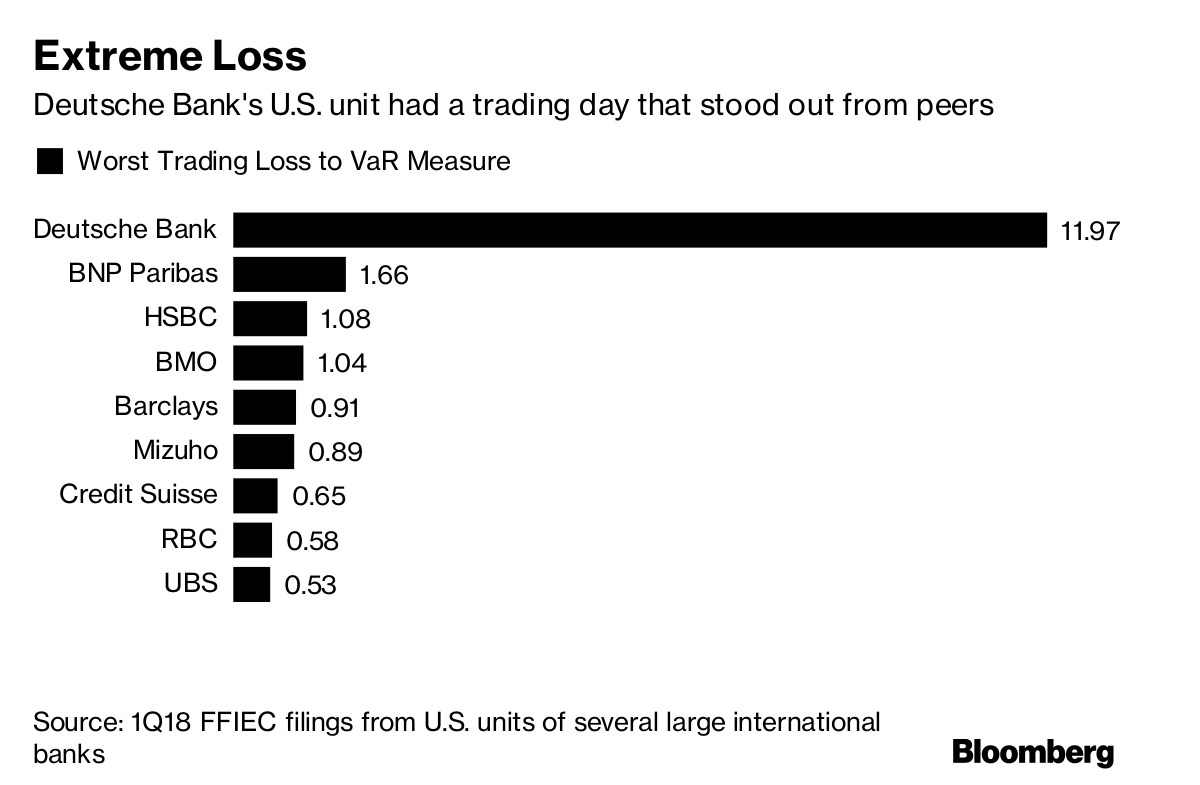 Multiple U.S. regulators, including the Federal Reserve, inquired about the outsized loss, according to a person with knowledge of the discussions. Eric Kollig, a Fed spokesman, and Richard Loconte, a spokesman for New York’s Department of Financial Services, which supervises part of Deutsche Bank’s U.S. business, declined to comment.

In such situations, U.S. regulators generally have to take bank executives at their word. Foreign banks don’t typically inform U.S. regulators of trading activity conducted by their non-U.S. units — a chronic source of concern, former regulators said, asking not to be named speaking about a bank they previously supervised.

"Such a high trading loss is off the charts," said Gregor Weiss, a professor at Leipzig University and an expert in financial risk management. "It’s definitely something a supervisor will look into."

Deutsche Bank’s filing to regulators didn’t disclose the exact size of the loss, but there are hints. The unit’s average regulatory value-at-risk measure during the period was $30.8 million. Because daily variations in the figure aren’t disclosed, it’s unclear what the day’s loss was.

The U.S. holding company ended the quarter with trading revenue of negative $64 million, indicating losses on trading positions, while the comparable subsidiaries of Barclays Plc and Credit Suisse Group AG each reported more than $100 million of positive revenue, according to regulatory filings. The figures in those reports exclude fees, commissions and interest income from bonds in inventory. Including that income, Deutsche Bank’s unit had positive revenue.

The extreme day was one of four in the first quarter in which Deutsche Bank’s U.S. traders had a loss that surpassed the firm’s regulatory VaR estimate. No other bank required to file quarterly reports with the Fed detailing significant trading activities had more than two such days, and none had a daily loss that even doubled its estimate, according to a review of the 33 filings from U.S. lenders and the local units of foreign firms. Deutsche Bank had just one such day all of last year. Exceeding the estimate too often causes a bank’s capital requirements to rise.

It’s been a tumultuous year for Frankfurt-based Deutsche Bank. In March, it inadvertently transferred 28 billion euros ($35 billion) to one of its outside accounts — a blunder that was quickly reversed and caused no financial harm. Late in the month, Fed officials delivered a stern warning to executives in New York, urging them to fix internal systems and oversight.

Read more: Deutsche Bank is said to be scolded by Fed

Sewing is whittling equities and corporate finance units and planning to cut global headcount to significantly below 90,000 from about 97,000. A number of leaders and dealmakers in the U.S. have left the bank amid the shakeup. In a letter to staff this month, Sewing said the firm has taken steps to reorganize its business, bolster capital and reduce risks.

“Many of you are sick and tired of bad news,” he acknowledged.

— With assistance by Donal Griffin, Steven Arons, and Sridhar Natarajan