A full-page ad in the Sunday editions of the Washington Post and The New York Times urged Tesla CEO Elon Musk to “dump Trump.”

The ads were paid for by a startup investor named Doug Derwin. The longtime Silicon Valley resident told CNNMoney he shelled out $400,000 to run ads in the Times and the Post, as well as the San Francisco Chronicle and the San Jose Mercury News.

Derwin said he didn’t want to launch the campaign at first. Back in January, he was eagerly awaiting the arrival of his Tesla (TSLA) Model S electric car.

But as his Tesla was about to be delivered, Derwin said he caught wind of Uber CEO Travis Kalanick’s decision to walk away from Trump’s business advisory council, which Kalanick served on with Musk. Kalanick had previously defended his working relationship with President Trump, but public pressure mounted in the wake of the president’s immigration order.

Musk has defended his decision to stay on the advisory council. He said on Twitter in February that his position “does not mean that I agree with actions by the administration.”

Musk also said that by keeping a seat at the table, he is “engaging on critical issues” that “will on balance serve the greater good.”

Regarding the meeting at the White House: pic.twitter.com/8b1XH4oW6h

But Derwin said that he couldn’t believe Musk hadn’t done more to lambast Scott Pruitt, Trump’s pick for head of the Environmental Protection Agency. Pruitt has said he does not believe that carbon dioxide is a primary contributor to global warming.

Derwin said he canceled his Tesla order — eating the cost of his $2,500 deposit — and donated the $150,000 to the American Civil Liberties Union of Northern California.

The ACLU did not immediately return a request for comment. 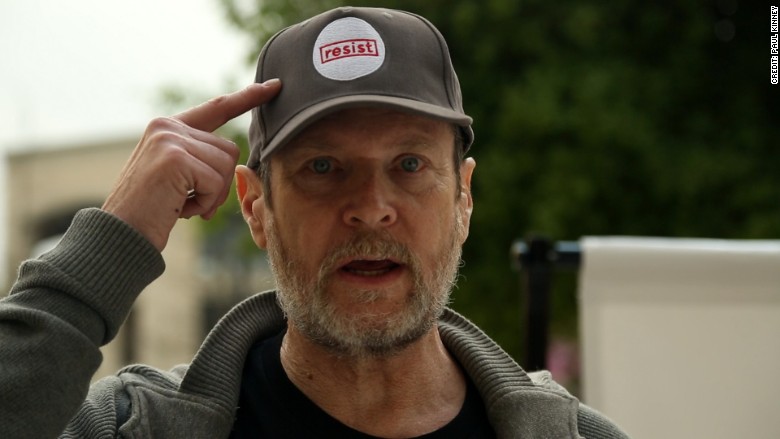 The letter is Derwin’s latest attempt to get Musk’s attention. He said he earlier bought a billboard near Tesla’s headquarters in Palo Alto and hired ad vehicles to cart around his message.

The Sunday advertisement pleads with Musk to push back more vocally against Trump, who Derwin calls “a disaster for the fight against climate change.”

“You aren’t accomplishing anything” on the White House advisory boards, the letter reads. It adds that Musk’s “implied support for Trump is strengthening his ability to enact his agenda.”

There's an open letter to Elon Musk in today's NYTimes urging him to "dump Trump." pic.twitter.com/AKrIiYfDMC

Tesla fired back at Derwin’s campaign on Sunday. In a statement to CNNMoney, Musk’s electric car company called it “quite ironic” that Musk is being attacked about environmental issues.

“Tesla’s entire reason for existing is to accelerate the advent of sustainable energy,” the statement said. “If someone wants to spend money to promote a pro-environment objective, we can think of better ways to do that than attacking the people who are most committed to that very purpose.”

Derwin said he’s funding his efforts with money he netted during the massive stock market rally after Trump’s election victory. He called it “blood money.”

“It bothered me to say I just made X amount of dollars, and I made it because of Donald Trump,” he said.

And the tech investor claims to have another $1 million at the ready. He said he wants to donate it to the charity of Musk’s choice — but he’ll only do that if Musk speaks up.

“He doesn’t even have to resign from the board, just decry Trump climate change policies,” Derwin said.

He also wants Musk to wear some “resist” paraphernalia — the hallmark of the anti-Trump movement.