Shares of telemedicine providerTeladoc Inc.(NYSE:TDOC) have turned in a stellar bill of health so far in 2018, with the stock jumping 87% through July 9, according to data from S&P Global Market Intelligence. The stock’s rise hasn’t come from any one event, but has been mostly steady over the last few months as the company has made some acquisitions, and more investors have become aware of its potential opportunity.

You can see from the chart below that the stock’s gains this year have mostly come in the past couple of months, though there was no single driver of the surge. 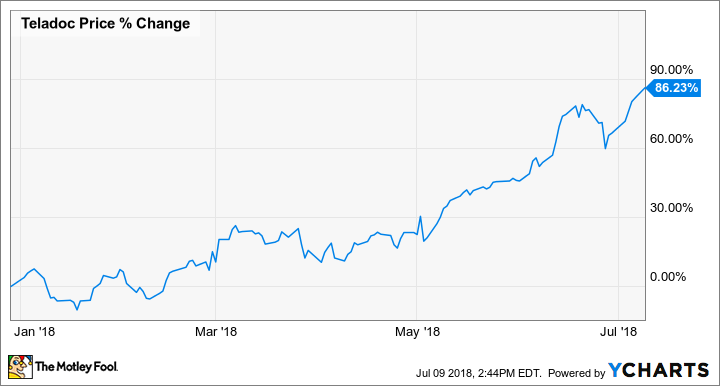 The world’s leading provider of telehealth services (healthcare provided through tools like videoconferencing) started to rally in the beginning of May after it posted strong results in its first-quarter earnings report on May 2, sending the stock up 6%. Revenue in the quarter more than doubled, jumping 109% to $89.6 million with the help of last year’s acquisition of Best Doctors. Organic revenue was up 47% as the company also posted strong growth in membership and visits. 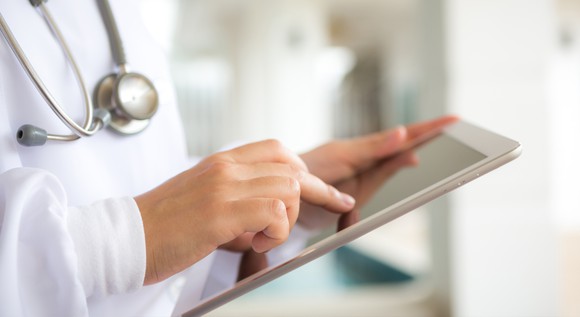 Teladoc also posted a narrower loss than expected in the quarter with a per-share shortfall of -$0.39 against estimates at -$0.43. The report prompted an extended rally in the stock as shares gained for nine sessions in a row. And the stock surged after Teladoc announced another acquisition on June 4 when it said it had bought Advance Medical, the leading virtual-care provider outside the U.S., for $352 million, consolidating its global leadership in telemedicine. The stock rose 4% the day the news came out, and continued to gain later in the month as leadership presented at investor conferences.

Teladoc is still operating at a loss as the company invests in growth and acquisitions. And that strategy seems justified, given that revenue more than doubled in its most recent quarter. For the full year, the company expects revenue of $350 million to $360 million, or about 50% more than a year ago. But that figure will likely be revised higher following the Advance Medical acquisition. Considering the company sees a total addressable market 300 times larger than its current one, more rapid growth should be on the way for Teladoc.