Many analysts were excited by the prospect of Kraft and Heinz merging, sparked in part by Warren Buffett andBerkshire Hathaway(NYSE: BRK-A) (NYSE: BRK-B) taking about a 25% stake in the new entity. Turns out, those analysts were right, as the company has grown impressively throughout 2016. 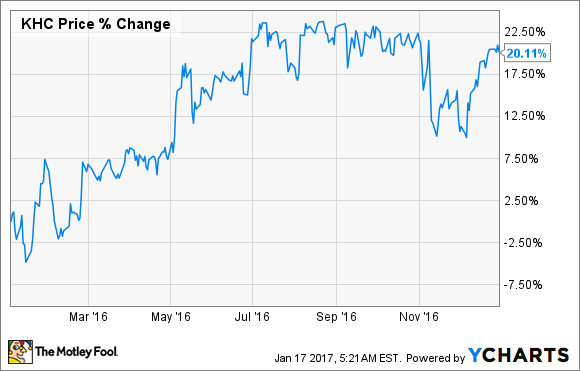 In the company’s most recent earnings report, for the period ended Oct. 2, net sales only grew 2.4%, but earnings shot up thanks to cost and operation synergies of the two companies. Operating income grew 254% year over year, and adjusted EPS rose to $0.83, compared to $0.44 for the same period in the prior year.

Kraft Heinz is largely considered a “consumer defensive” company, meaning it’s a relatively safe play in a volatile market, as even in the event of a market correction, people are still eating inexpensive products like Oscar Mayerand Kraft Macaroni & Cheese. Thishas helped the brands to stay relatively stable throughout market turmoil in years past. That’s also why the 2016 growth in a slow-growth industry is such an important feat.

As a result of that growth, though, Kraft Heinz stock now looks expensive, trading at 38 times earnings. Still, the stock offers an attractive dividend with a 2.7% yield even after the 20% share price growth in the last year, and that has grown nicely in recent years, including the most recent nearly 5% rise in August. Additionally, the company has plans to continue unlocking value from the merger and increase its brands’ presence in new markets. In the most recent quarterly earnings release, CEOBernardo Hees said, “Our focus now is to finish 2016 strong and set the stage for another year of strong, profitable growth in 2017.”