The stock market surged higher on Monday, with the biggest gains coming for the Dow Jones Industrial Average, which closed above the 25,000 level. Investors were generally upbeat about signs that suggested the potential for a more favorable resolution of trade disputes between the U.S. and China, and positive moves in other financial markets continued to contribute to the stock market’s success as well. Several individual companies in key industries saw major gains. Denbury Resources (NYSE:DNR), MB Financial (NASDAQ:MBFI), and World Wrestling Entertainment (NYSE:WWE) were among the best performers on the day. Here’s why they did so well.

Shares of Denbury Resources rose 9%, leading a host of other energy-related stocks higher. Oil prices surged by more than $1 per barrel, rising above the $72-per-barrel mark and continuing what has been an impressive rise over the past few months. For Denbury, the news is especially important, because it has a higher debt load than many of its industry peers. If oil prices can stay above $70 or climb from here, then it’ll put Denbury in a position in which it should be able to restructure and pay down debt more effectively, eventually getting itself out from under the potential for dramatically higher financing costs if interest rates stick with their recent upward trend. 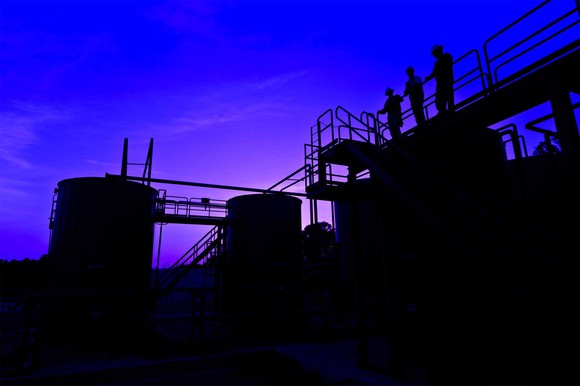 MB Financial stock soared 13% after the Chicago-based regional bank received a takeover bid from fellow bank Fifth Third Bancorp. Under the terms of the $4.7 billion deal, Fifth Third will pay MB Financial investors $5.54 per share in cash plus 1.45 shares of Fifth Third stock for every MB share they own. For Cincinnati-based Fifth Third, the move allows the Midwestern bank to expand its scope and gain a stronger foothold in the Chicago market. With additional opportunities to cut costs through operating synergies, Fifth Third hopes to make up for what investors are seeing as a deal that’s skewed toward MB Financial in terms of valuation.

WWE smacks down its competition

Finally, shares of World Wrestling Entertainment climbed another 12.5%, adding to their gains from last week. The wrestling giant initially jumpedlast Thursday on reports that it would seek to get a better deal from a network to show its Smackdown series. Today, the stock rose even further once news came out that 21st Century Fox would broadcast the series, taking the rights away from current network NBCUniversal. Complete terms weren’t available, but reports suggest that the deal is a vast improvement over what WWE got previously, and that’s good news for shareholders, who want the wrestling entertainment giant to squeeze every penny of value possible from its programming.