The food delivery race is on.

Ten months have passed since Action Alerts PLUS holding Amazon.com Inc. (AMZN) rocked the retail market with the announcement of its $13.7 billion acquisition of Whole Foods Market. Within that time, the e-commerce giant hijacked the industry, pushing grocery giants off their thrones with its ubiquitous Whole Foods delivery service. Walmart Inc. (WMT) , struggling with e-commerce, is slowly rolling back grocery offerings, instead focusing on everyday products. Kroger Co. (KR) has all but withered. Even the warehouse retailers are struggling to match Amazon’s sheer dominance in produce and perishable foods.

A helluva a story, right? Except that none of it is true.

The Amazon deal sent grocery stocks plummeting last June, but very little has changed in the sector. If anything, it’s Walmart that’s leading the race to offer wide-scale grocery delivery.


“Amazon is not winning,” said Jeff Macke, president of hedge fund Macke Asset Management. “There’s still a lot of market penetration in grocery delivery, but the idea that Amazon was going to come in here with a fraction of the market share and take over the industry was just silly.”

Walmart announced Tuesday, April 10, that it has brought on board a third delivery partner  Postmates  to help it expand online grocery delivery to more than 100 metro areas across the country. Currently, the service is in seven cities through partnerships with Uber and Deliv, as well as its own logistics operation via Jet.com and last-mile delivery startup Parcel. Charlotte, N.C., is the latest on the list.


Meanwhile, Amazon said the same day that its two-hour Prime delivery of groceries has reached its seventh metropolitan market  Los Angeles. A spokesperson for the digital behemoth told TheStreet that it now offers grocery delivery in 30 markets. The company did not respond to an inquiry about its plans for expanding the service.

If Amazon wanted to dominate grocery, Walmart would be its biggest competitor, Macke told TheStreet, but so far, Amazon isn’t even close. Walmart has 10 times more stores than Whole Foods, and Walmart has long boasted that a Walmart location is within driving distance of 90% of American households. 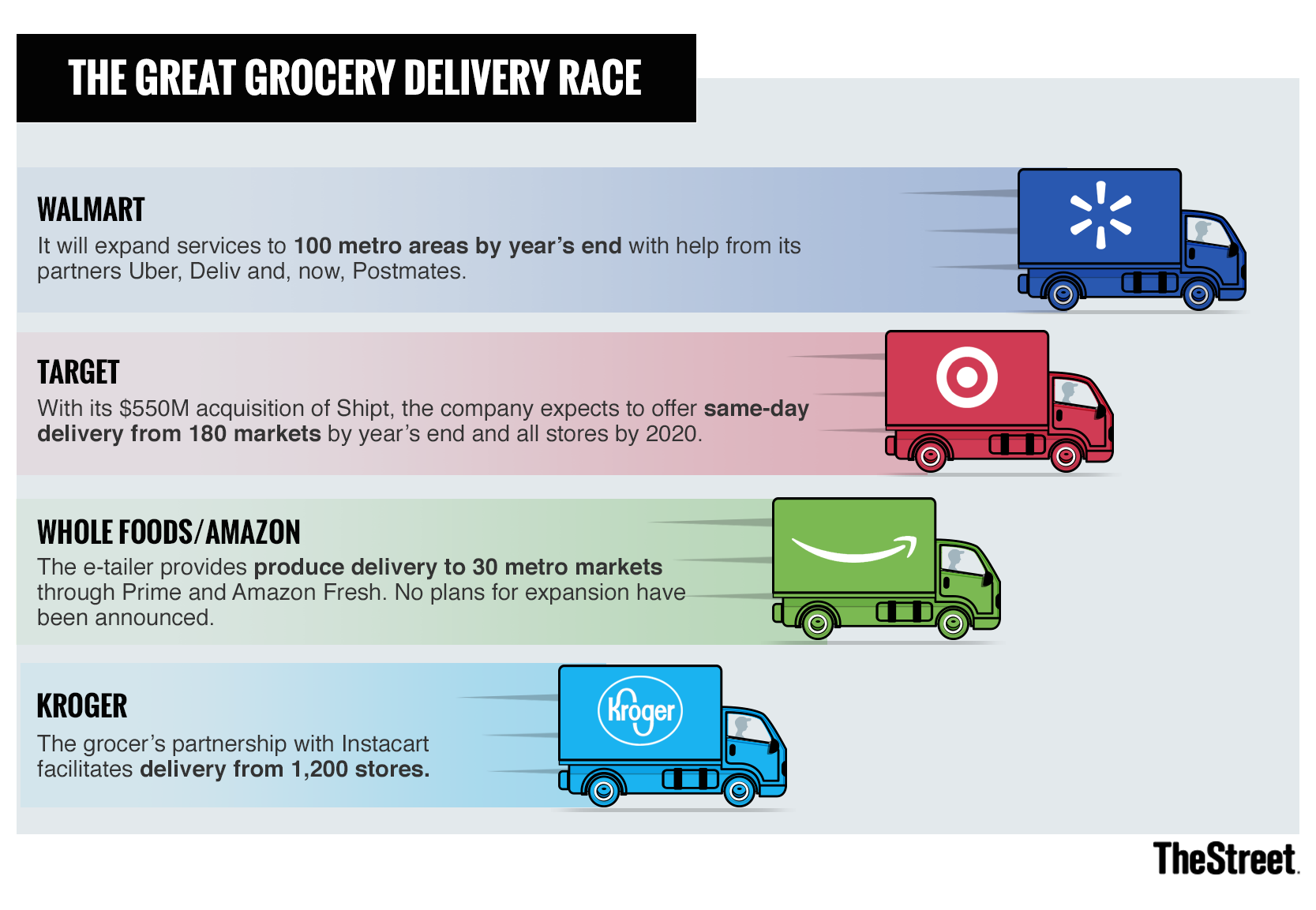 Target Corp. (TGT) , too, is accelerating its delivery options. With its $550 million acquisition of last-mile delivery company Shipt in December, the retailer now offers same-day delivery of groceries and other products from half its 1,800 stores. By year’s end, the service will be available in nearly 180 markets.

Nonetheless, while Walmart and Target are charging ahead of Amazon, Kroger Co. (KR) , the second-largest grocer in the country, is wading into the delivery territory through a partnership with delivery startup Instacart. Although the service is now at 1,200 stores, a considerable proliferation relative to Walmart and Target, Kroger’s sole reliance on third-party resources should be cause of concern, Macke said. Walmart, in fact, has its own personal shoppers who choose produce for delivery and store pick-up orders  a key reason why the retailer never partnered with Instacart, according to a spokesperson.


For Kroger, there’s also a problem with margins, he added. “Walmart, Target and Amazon all see the benefit of upsell, in which grocery customers end up buying other, higher-margin products outside of produce.”

The Cincinnati-based supermarket chain, on the other hand, doesn’t yet have these additional offerings. “Kroger is for sure losing money with grocery delivery now,” Macke said.

Since Amazon announced its acquisition of Whole Foods, industry giants have scrambled to hone their own grocery delivery. As of late last year, Instacart reported partnerships with over 165 retailers  up from 30 in early 2017. So far this year, the startup has raised not one, but two rounds of venture capital fundraising totaling $350 million, led by hedge fund Coatue Management. It’s now valued at $4.35 billion.

“If there were any grocers on the fence when [the Amazon deal] happened, it changed minds,” Instacart CEO Apoorva Mehta told TheStreet in November. “That day, we heard from every important grocery retailer in the country. Everyone wanted to figure out a way to come online and meaningfully accelerate their e-commerce.”

But if grocery delivery were a race, it’s nowhere near the finish line.

“The next thing to consider is how to make money and whose strategy makes the most sense,” Macke added. “No one has figured this one out yet.”