Shares of Google parent Alphabet Inc. (GOOGL ) , like fellow tech giants and much of the market, have surged since Christmas. With that said, Google stock has effectively moved sideways over the last year. So, let’s see what to expect from the firm’s fourth-quarter financial results that are due out after the closing bell Monday.

Google has been an internet powerhouse for years and its search engine and web browsers are nearly ubiquitous today. Google reportedly grabbed over 37% of total US digital ad spending in 2018, which crushed second-place Facebook’s (FB ) roughly 21% and third-place Amazon’s (AMZN ) 4.1%. The company’s ability to attract advertisers will likely grow as Netflix (NFLX ) and other non-ad supported platforms continue to expand.

On top of that, Alphabet competes against the likes of Apple (AAPL ) and other hardware markers with its Pixel smartphones, Home smart speaker, and more. The firm also boasts a cloud computing business, an app store, and has bet on the future with divisions such as its self-driving car segment Waymo.

Moving on, current Zacks Consensus Estimate calls for Google’s fourth-quarter revenues to surge 20.90% to reach $31.28 billion. Investors should note that our revenue estimate excludes total traffic acquisition cost or TAC (TAC is the portion of revenues shared with Google’s partners and amounts paid to distribution partners and others who direct traffic to the Google website). The company’s non-TAC revenues jumped 21.9% to hit $27.16 billion in the third quarter, while Google’s total traffic acquisition costs hit $6.582 billion.

At the bottom end of the income statement, Alphabet has seen its Q4 earnings estimate revision picture turn more negative over the last 30 days. With that said, the company’s adjusted quarterly earnings are projected to climb 14.23% to hit $11.08 per share. Last quarter, the firm’s adjusted EPS figure soared 36.5% year over year.

More specifically, Google’s core advertising business is projected to jump roughly 18.7% from $27.227 billion in the year-ago period to reach $32.335 billion, based on our current NFM estimates. Meanwhile, Google’s TAC is expected to reach $7.559 billion. 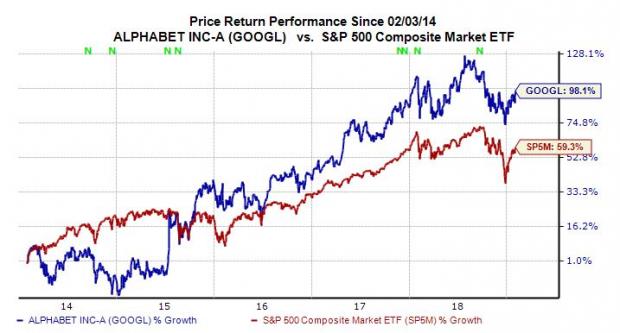 Alphabet is currently a Zacks Rank #3 (Hold) based on its recent earnings estimate revision activity. GOOGL also sports an “A” grade for Growth but a “D” for both Value and Momentum in our Style Scores system.

As we mentioned at the top, shares of GOOGL are nearly flat over the last 12 months. Google stock rested at around $1,121 a share Friday, which marked a roughly 13% downturn from its 52-week high of $1,291 per share.

Alphabet is scheduled to report its fourth-quarter fiscal 2018 financial results after the closing bell on Monday, February 4. Make sure to check back here for our full analysis of Alphabet’s actual results.

More Stock News: This Is Bigger than the iPhone!

It could become the mother of all technological revolutions. Apple sold a mere 1 billion iPhones in 10 years but a new breakthrough is expected to generate more than 27 billion devices in just 3 years, creating a $1.7 trillion market.

Zacks has just released a Special Report that spotlights this fast-emerging phenomenon and 6 tickers for taking advantage of it. If you don’t buy now, you may kick yourself in 2020.