Stocks declined in the morning on geopolitical concerns, but recovered much of their losses in the afternoon. TheDow Jones Industrial Average (DJINDICES:^DJI)was off almost 300 points early, but closed down less than 100 points. TheS&P 500 (SNPINDEX:^GSPC)posted a small loss. 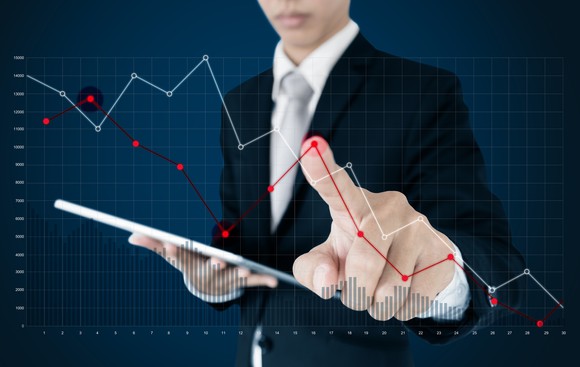 Best Buy reported first-quarter sales and profit that smashed Wall Street expectations, but provoked some worry about the second half of the year, and shares dropped 6.7%. Sales increased 6.8% to $9.11 billion and non-GAAP earnings per share soared 37% to $0.82. Analysts were expecting the company to earn $0.74 per share on revenue of $8.73 billion.

Comparable-store sales were up a strong 7.1%, compared with a 1.6% gain in the period a year earlier. Domestic comparable sales were up 7.1%, “with the largest drivers being mobile phones, appliances, computing, tablets and smart home.” International comps increased 6.4%, and domestic online comps grew 12%. Gross margin was 23.3%, down from 23.7% in the year-ago quarter.

Looking forward, the company gave guidance for Q2 sales that were slightly above the analyst consensus on comparable sales gain of 3% to 4%, and for EPS in the range of $0.77 to $0.82, compared to analysts estimates for $0.82 in EPS. But the thing that probably concerned investors the most was that Best Buy didn’t update full-year guidance, which calls for comps growth of flat to 2%, saying it was too early in the year to predict.

Given 7.1% comps last quarter — the fourth quarter in a row above 4% — and an expectation that this quarter will see 3% to 4% growth, the implication that investors drew from guidance was that the second half would be a disaster. When asked in the conference call whether investors should read more into that than “it’s too early to know,”CFO Corie Barry said, “No.” But, of course, they did anyway.

Performance was strong across the company’s brands. Pottery Barn comps were up 2.7%, Pottery Barn Kids and Teen increased 5.3%, Williams Sonoma grew 5.6%, and West Elm jumped 9%. E-commerce net revenue grew 11.3% and now accounts for 53.7% of total company net revenue. Gross margin improved to 35.9% from 35.6% in the period a year earlier.

“Following a robust fourth quarter, we saw continued strength in the first quarter. We achieved strong results against our guidance range across all metrics, with our e-commerce revenues outpacing to almost 54% of our total revenues,” said CEOLaura Alberin the press release. “Our customer growth continued to trend positively for both new and existing customers, demonstrating the success of our balanced customer acquisition strategy.”

Williams-Sonoma has now strung together several successful quarters in a row with broad-based, accelerating revenue growth. It’s not surprising that investors bid up shares today.