Wells Fargo & Co. (NYSE:WFC) has historically been regarded as one of the highest quality U.S. financial institutions. However, in September 2016, it was reported that Wells Fargo allegedly opened or applied for more than 2 million bank accounts and credit cards without customers knowledge or permission. While financial markets are generally efficient, I believe the Wells Fargo account scandal may be distracting investors from taking advantage of a great opportunity as we move into 2018. As many market participants continue to focus on potential legal ramifications, the credit quality of Wells loan book remains pristine, and the company remains overcapitalized from a capital ratio perspective, potentially allowing the company to return more than 100% of annual earnings to investors for the foreseeable future.

The credit quality of Wells loan book remains pristine, as net charge-off ratios continue to remain historically low. Net charge-off rates have improved significantly from their 2009-2010 peak at nearly 2.5% on a quarterly basis. Currently, the industry average is 0.51%, yet Wells Fargo reported third quarter net charge-off of only 0.30%, which is well below average, according to Bloomberg and Wells Fargo investor relations presentations. Additionally, over the past 12 months, Wells nonperforming assets (NPAs) have declined from $12.0 billion to $9.3 billion. As net charge-offs and NPAs remain low, it allows Wells Fargo to reduce its provision expense. These reduced expenses flow straight to the bottom line of the companys profitability, increase profit margins, and improve the companys free cash flow. Given this trend, I expect Wells Fargo to be able to continue to maintain low loan provision expenses going forward, which is a positive catalyst for future earnings growth. 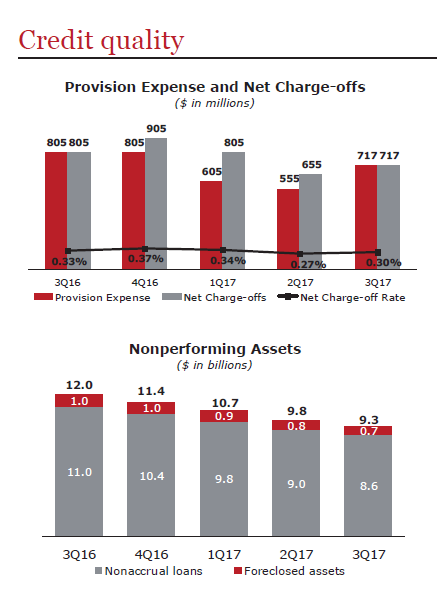 Additionally, Wells Fargo remains overcapitalized from a capital ratio perspective. Wells currently maintains an 11.8% Tier 1 Capital Ratio versus the banks internal target of 10.0%. Additional financial regulation was put in place as a reaction to the 2008 financial crisis, reducing the ability of U.S. banks to produce meaningful loan growth and return capital to shareholders through increased dividends and share repurchases. However, with the election of President Donald Trump and his pursuit of a rollback of these burdensome financial regulations, Wells Fargo may be able to return more than 100% of annual earnings to investors for the foreseeable future. Based on the companys last 12 months’ net income, Wells Fargo earned $20.5 billion. The company directed roughly $9 billion to its annual dividend, leaving $11.5 billion for discretionary capital returns to investors, which will likely be returned in the form of share repurchases. Even if Wells Fargo is unable to improve its profitability over the next three years, its overcapitalization will allow it to buy back $34.5 billion in stock after dividends. This represents nearly 12% of the market capitalization of the entire company. Said another way, Wells Fargo has the ability to buy back 12% of the company over the next three years, which would substantially reduce share count and artificially increase its earnings per share power. 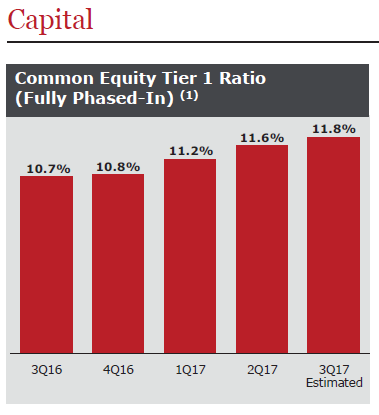 The potential rollback in banking regulation may also improve Wells Fargos ability to increase its future dividend payments to investors. Wells currently pays an annual dividend of $1.56 per share, which at its current price equates to a dividend yield of 2.6%. Compared to government bonds globally, 2.6% is a comparatively attractive yield versus many bond investments. Based on 2017 earnings estimates from Bloomberg, Wells Fargo only pays out 38% of its earnings in the form of dividends. Prior to the financial crisis, banks often maintained much higher payout ratios than currently. With the prospects of reduced regulation on banks in the future, it is very likely that banks will be able to increase dividends at accelerating rates going forward, which we expect Wells Fargo to pursue over the next several years.

Furthermore, WFC stock has meaningfully underperformed its large-cap regional banking peer group from September 19, 2015, to December 19, 2017, returning only 18% versus PNC Financial Services Group (PNC), US Bancorp (USB), and SunTrust Banks Inc. (STI) returning 66%, 33%, and 74%, respectively. Following this period of outperformance, Wells Fargo now trades at a discount to its peers, currently trading at a forward price-to-earnings ratio (P/E ratio) of 14.1x, versus an average of 15.1x for the companys peer group, according to Bloomberg. Given this discount to its peers, Wells Fargo appears to be an attractive investment within the regional banking industry.

In conclusion, I believe investors who choose to focus on the negative news flow regarding the Wells Fargo account scandal may be overlooking a great opportunity. Wells Fargo maintains an extremely high quality loan portfolio, as represented by the companys below average net charge-offs. Additionally, Wells remains overcapitalized from a capital ratio perspective, potentially allowing the company to return more than 100% of annual earnings to investors for the foreseeable future. I believe Wells Fargo may be a great stock pick for 2018.

About this article:ExpandAuthor payment: $35 + $0.01/page view. Authors of PRO articles receive a minimum guaranteed payment of $150-500.Tagged: Investing Ideas, Long Ideas, Financial, Money Center BanksWant to share your opinion on this article? Add a comment.Disagree with this article? Submit your own.To report a factual error in this article, click here