Weatherford International (NYSE:WFT) has been an undead company for several years now. Despite the fact that it hasn’t produced a profitable year since 2012, has been burning through cash for longer, and has more debt than the total capitalization of the business, it somehow hasn’t gone bankrupt. This entire time, management has been promising a turnaround with ambitious plans to reduce its costs, but these efforts have been all for naught as its financial situation continues to worsen.

This past quarter, we got an update on the progress of the most recent iteration of its turnaround plan. Somewhat surprisingly, some things in that plan are showing results. Though not the sweeping changes investors were hoping for, it was something. Let’s take a look at what happened at Weatherford International this past quarter and how investors should be approaching this new turnaround plan. 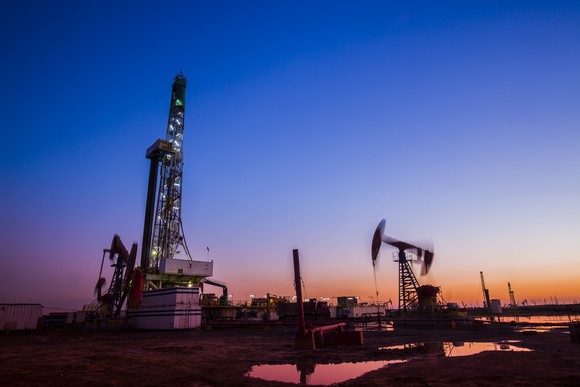 If you want to hear something positive from Weatherford’s most recent results, it’s that it was able to drastically reduce its operating loss despite only modest gains in revenue. It goes to show that the cost saving initiatives that CEO Mark McCollum has implemented are thus far paying off. According to the plan, the company will reduce annual costs by $1 billion and should lead to being cash flow neutral this year and in positive territory in 2019.

Looking at the company’s results, though, that will be a tall order. Its business segments are still in the red, and the $149 million in quarterly interest expenses is going to eat up a lot of revenue. It also doesn’t help that the company is going through yet another round of restructuring costs, which has resulted in “one-time” expenses every year for the past four years. 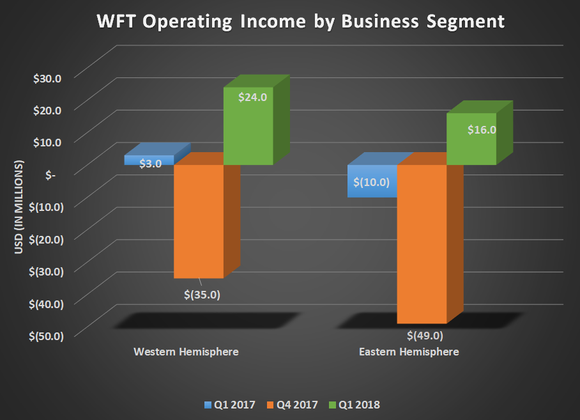 Management has also announced that it will unload more of its assets. On top of the sale of its pressure pumping equipment to Schlumberger earlier in the year and the long-standing “for sale” sign on its land rigs, it’s negotiating two more sales that it estimates will net the company $500 million. One would assume that the proceeds from these sales will go toward trimming down its $7.7 billion in debt.

In Weatherford’s press release, McCollum went out of his way to highlight the progress management has made on this turnaround plan he has put in place and how it should put the company back on a profitable track.

As we continue on our transformational path, our results for the first quarter of 2018 reflect our focus on planning and executing tangible actions to improve our position as a strong, viable and innovative organization.Sequentially and on a year-over-year basis, our operating income, margins, and adjusted EBITDA improved substantially, as we steadily reduced our core costs and benefited from an improving market environment.Additionally, we have increased accountability, efficiency and process discipline across the entire Company. 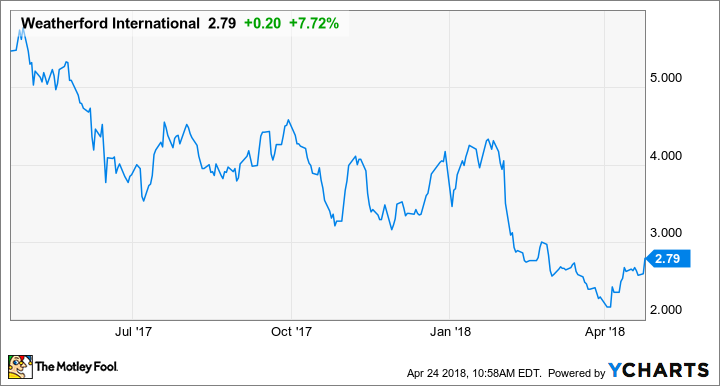 Show me this time is different

McCollum was installed as CEO around this time last year — coming over from the CFO role at Halliburton — and should at least be given some time to see if this turnaround plan sticks and if he can turn this fledgling oil services company around. That said, it’s been in turnaround mode for the better part of a half-decade and yet little progress has been made in improving its profitability or balance sheet. Just to give an idea of how big of a hill McCollum has to climb, the company’s debt load is more than total assets on the books (38% of which are easy-to-finagle goodwill and intangibles).

If management can enact the amount of cost savings it claims it can achieve, and if it can put its planned asset sales toward trimming its debt down to a more manageable level, then maybe we can revisit this company again as a viable investment. Until that happens, though, no investor should be touching this stock. There are simply too many variables that could go wrong in the interim to make it worth the risk.