Apple (NASDAQ:AAPL) announced this week that its retail chief, Angela Ahrendts, will resign in April to follow “personal and professional pursuits.” Ahrendts, who took the role in 2014 and became Apple’s highest-paid executive, revamped the tech giant’s retail stores, merged its brick-and-mortar and online shopping experiences, and made the buying process feel more like a luxury experience.

During Ahrendts five years in charge, Apple increased its global store count from 437 to 506 locations while boosting its average sales per square foot by 21% to $5,627. However, Apple also struggled to sell its products in China over the past two years, and Ahrendts’ emphasis on luxury — which carried over from her time as Burberry’s CEO — arguably backfired as the company priced itself out of an extremely competitive consumer market. Human Resources Chief Deirdre O’Brien will replace Ahrendts and hold both positions as its new VP of Retail + People. Ahrendts stated that the retail business “has never been stronger or better positioned to make an even greater contribution for Apple,” and declared that there was “no better time to pass the baton to Deirdre, one of Apple’s strongest executives.”

CEO Tim Cook stated that O’Brien “understands the qualities and strengths of our team better than anyone” and was “an exceptional leader” and a “vital partner to our retail teams around the world since the very beginning.” O’Brien, who joined Apple three decades ago, is clearly an experienced executive — but can she rejuvenate its aging retail stores?

Ron Johnson, who served as Apple’s retail chief from 2000 to 2011, launched the first Apple Stores in 2001 — which turned a dull computer sales floor into “a sleek playroom filled with gadgets,” according to The New York Times. Apple’s ability to attract loyal consumers to those stores, especially during Steve Jobs’ tenure, made them hot beacons of foot traffic in retail areas.

Apple leveraged that strength to negotiate favorable rent rates at malls. A report in The Wall Street Journal in 2015, which claimed that Apple Stores could generate a third of an entire mall’s sales, stated that some malls only charged Apple 2% of its sales per square foot in rent — compared to a 15% cut for other mall tenants.

Johnson’s successor, John Browett, tried to slim down Apple’s stores by reducing the number of employees and cutting costs. Tim Cook and other executives disapproved of the strategy, fearing that the unnecessary cuts would cause customer service disasters during high-profile product launches. Browett was fired after just six months on the job. 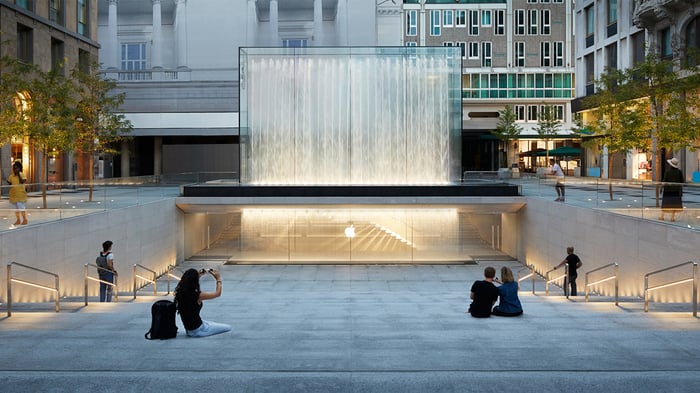 What Ahrendts brought to the table

Unlike Browett, Ahrendts aggressively expanded Apple’s brick-and-mortar footprint, sent out weekly video updates to Apple’s retail employees through an internal app, and added pre-launch showcases for products like the Apple Watch at its stores.

Ahrendts introduced scheduled VIP fittings for the Apple Watch, and customers who were interested in the premium gold versions were hosted in a private VIP room — similar to Burberry’s playbook for its biggest spenders. Those strategies were arguably pretentious, but they reinforced Apple’s status as a luxury brand. They also likely helped Apple Watch conquer nearly half of the fragmented smartwatch market, according to ABI Research’s latest numbers.

Ahrendts launched the “Customer at the Center” initiative, which encourages customers to order their products online instead of lining up at its brick-and-mortar stores. Apple’s diehard fans continued to line up at its stores, but Ahrendts’ approach made the process easier for everyday customers. Ahrendts also launched free “Today at Apple” creative sessions at its retail stores.

Ahrendts subsequently oversaw the in-store launches of the iPad Pro, AirPods, HomePod, and new iPhones. Most of those new devices failed to capture as much attention as the Apple Watch.

The iPhone X turned heads with its polarizing design choices and high price tag, but the critics claimed that Apple was overestimating its brand appeal. Its successors — the iPhone XS, XS Max, and XR — fared worse, and its first-quarter (holiday) iPhone revenue tumbled 15% annually.

Shortly after the launch of the XR last October, rumors circulated that Ahrendts could leave Apple, and industry watchers speculated that the company was looking for fresh ways to boost its retail sales gain.

It’s unfair to blame Ahrendts for Apple’s recent problems, which were mainly caused by poor innovation, design choices, and pricing strategies. But looking ahead, O’Brien must decide if Apple wants to keep following Ahrendts’ luxury retail strategy or roll back that high-end approach.