A bitcoin flash crash briefly rattled cryptocurrency traders the other night. Bitcoin lost more than $3,500 and has yet to recover a good portion of losses, sitting at just over $15,000 per coin this afternoon.

Speculators may have gobbled up this brief bitcoin dip. But it isnt the last time well see wild price action in the crypto world.

This brings us to my next wild prediction for 2018: Bitcoin will crash at some point in the next 12 months, losing at least half of its value.

To explain, we first need to break down bitcoin mania to its core.

Its safe to say that bitcoin and other cryptos are in the Wild West phase all speculative assets go through as they mature.

The rules and regulations are fuzzy. Rapid price appreciation has attracted scammers and hackers. For many investors who are just learning the bitcoin basics, it feels like crypto outlaws are looking to rip off anyone to make a quick buck.

Naturally, investors who have witnessed the meteoric rise of bitcoin and other cryptocurrencies have one big question on their minds:

But thats not necessarily a bad thing. All bull markets and manias eventually come to an end. Somewhere along the way, highflying assets will get hit with a hard reset or two before consolidating and moving higher. So its not that crazy to assume a major correction is on the way for bitcoin.

Just think back to the dot-com boom of the 1990s. Internet stocks were soaring higher every month. Companies would add dot-com to their name just to attract new investors (much like were seeing blockchain getting added to company names this year).

In hindsight, the March 2000 market top is easy to see.

But plenty of smart market analysts who saw trouble couldnt get the timing right. Even Alan Greenspan delivered his famous irrational exuberance speech in late 1996, more than three years before the market topped.

Its also important to note that the best investments of the dot-com era have matured into some of the biggest, most profitable companies in the world. Even after enduring the popping of the 90s tech bubble.

No one knows how much higher crypto can go from here. We can only assume were somewhere in the middle of a massive bull run. As with all red-hot investments, it can’t go higher in a straight line forever.

In fact, its already shown speculators plenty of volatility during its run just this year. 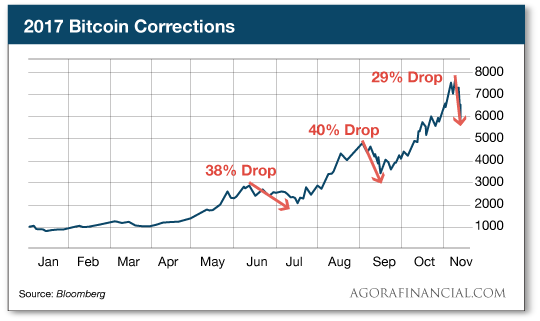 So far this year, bitcoin has endured short-term plunges of 20% or more on three separate occasions, not including its most recent flash crash. A bigger crash that effectively cuts the price of bitcoin in half could convince some speculators to cash in their chips and give others a chance to accumulate on the dip.

It might even kill off some of the 24-7 media coverage thats fueling the mania right now. All these are good things for those who want to see bitcoin succeed in the long run.

Ill be the first to admit I was skeptical of bitcoins big rally this year.

To be fair, I still dont know if a crazy price target like a million bucks is possible. But if bitcoin does continue its romp, well experience plenty of volatility along the way.

Bitcoin and its cryptocurrency cousins have made some forward-thinking investors a lot of money. We also can logically deduce that were somewhere in the middle of a major cryptocurrency boom.

That means that at some point in the future, the entire cryptocurrency market is going to have to start dealing with some growing pains. These growing pains could lead to wild price swings, hacks, attempts at government regulation you name it.

If my hunch is correct, well see a big crash next year.

It will be terrifying. But it might also offer up a massive opportunity for investors.

Gregs MUST-SEE DEC. 21 PREDICTION could turn $25 into a massive fortune.

But the window to act is closing. Click here now for the inside info.