Verizon (VZ) has been on a tear over the last week or so, shooting up all the way to a touch under $50 a share due to a variety of factors. Despite this run, the stock is still met with skepticism for many reasons. One of the biggest reasons is its debt situation, as many investors see the company as being over leveraged. Through an analysis of a group of ratios, I conclude that Verizon’s debt is becoming less of a problem and the concerns are overblown. As I say in all of my articles, ratios shouldn’t be the only data used when conducting a complete analysis of a stock, however, they have the ability to give key perspectives of certain trends occurring within the business itself. Here are my findings: 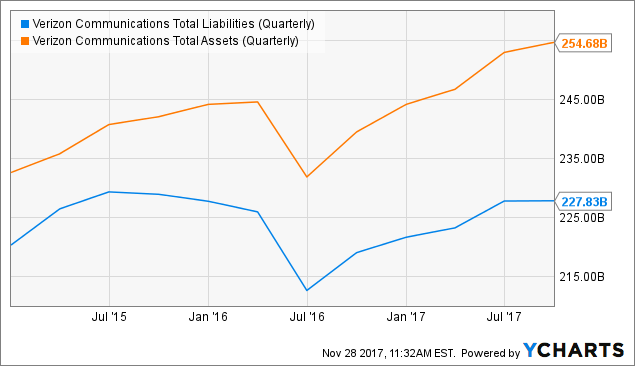 
The above graph displays Verizon’s total assets versus its total liabilities. The point of the figure is to show that, over the last couple years, Verizon has been able to increase its assets by a greater amount than its liabilities are increasing. Currently, total liabilities represent about 89.5% of Verizon’s total assets. In other words, for every one dollar of assets that Verizon owns, it has about 89 cents worth of liabilities. This number may seem on the high end, but the number isn’t very useful by itself. Instead, looking at this ratio over a period of time gives a better idea as to whether or not Verizon is actually growing its base of assets. Doing so shows that the gap between total assets and total liabilities has been gradually increasing with time, meaning that the liabilities they have relative to total assets have been decreasing. The ratio seems to have been the highest in mid 2015, when for every dollar of assets, Verizon had approximately 94 cents of liabilities.


This increase in assets relative to liabilities is definitely a good sign for Verizon’s business. The increased assets of Verizon will help to generate more revenue for the company and simply add value to the business. While this is occurring, the amount of liabilities that the company has is still increasing, but at a slower rate. When these two effects are combined, Verizon is becoming less leveraged because as time passes, it has increasingly more assets than liabilities. Although a relatively simple metric, it supports the idea that Verizon is not being overcome by debt. 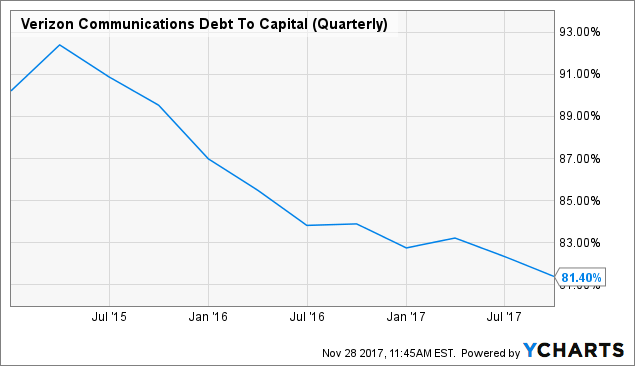 Another way to show how Verizon is becoming less leveraged is through looking at the Debt to Capital Ratio. The Debt to Capital ratio shows how much debt a company has relative to its capital, which consists of debt and shareholder equity. A high or increasing number signifies that the company is using more debt to finance its operations while a low or decreasing number shows that the company is shifting to using more equity to finance.


The graph shows that over the last few years Verizon’s debt to capital ratio has been decreasing significantly. This decrease is especially beneficial to Verizon in the long run because it is having to pay back less debt relative to the amount of equity it has. By financing through equity instead of debt, the company avoids having to pay back the debts with interest, which can be a tedious task, especially when Verizon is such a large company and their debt is quite large numerically. By financing through equity, the company gets money when investors buy the newly issued shares, a much safer bet than issuing large amounts of debt.


One might argue that issuing more stock can act like debt because Verizon will then have to pay the new shareholders its high dividend. This argument may work if no one reinvested the dividend, however, that is not the case. Since so many people reinvest upon receiving the dividend, money is actually being put back into the company. This results in the net payment being much less if the company were to finance through debt instead. Even though Verizon will continue to do a lot of financing through debt, it is satisfying to know that they are becoming less reliant on this practice. 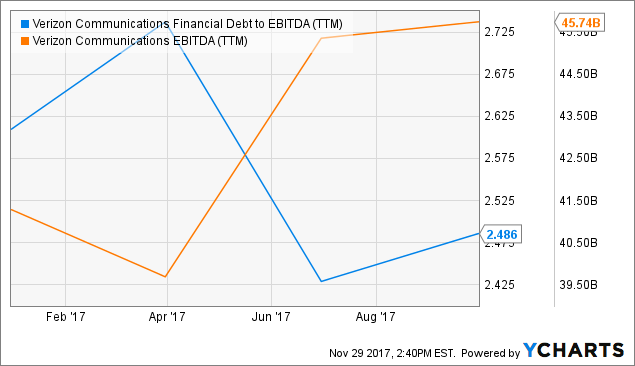 
Since the beginning of the year, Verizon has managed to successfully decrease this ratio. Thus, they either have experienced increased earnings relative to financial debt or just a reduction in financial debt entirely. The graph also helps us see that their EBITDA has risen over the past year by quite a large amount. This is the primary reason for the decline in the ratio for Verizon. With the rise in earnings combined with stagnant levels of financial debt, we can assume that Verizon has progressively put itself in a more comfortable position to cover this financial debt. This yet again leads me to believe Verizon’s business is becoming less leveraged and, in my opinion, less risky in the long term. 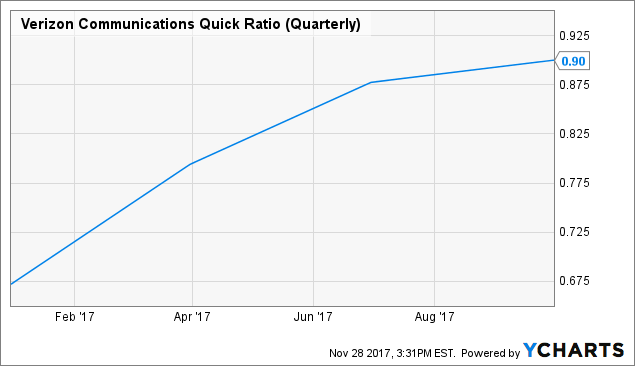 
In the past year, Verizon’s quick ratio has increased from about .675 to .90, meaning there has been stellar increase in their cash and equivalents relative to current liabilities. This also can be interpreted as they have 90 cents of cash on hand for every 1 dollar of current liabilities. This reiterates the fact that Verizon is not at the level of debt that it has previously been at. Additionally, Verizon’s cash growth relative to its current liabilities perfectly complements its growth in total assets relative to its total liabilities, which was discussed earlier in the article. While becoming less leveraged in the short term due to its increasing quick ratio, Verizon is also becoming less leveraged in the long run, as can be seen through the growth of its total assets compared to its total liabilities. These factors point to Verizon having increased success in the future as the business is able to operate with less reliance on debt while retaining the ability to build its wide base of assets.

The Current Liquidity Ratio determines the number of days a company will take to pay back its creditors with its current cash flow from operations. If the number is increasing over time, that means the company’s cash flow from operations isn’t sufficient to keep up with the amount of money it owes creditors. On the other hand, a decreasing number would mean the company has the ability to pay back its creditors quicker due to increased amounts of cash or less leverage.


As can be seen in the table, the number of days that Verizon would take to pay back its creditors with its cash flow from operations has shrunk dramatically since the beginning of the year. This is primarily due to the strong rise in operational cash flow that Verizon has experienced over the past year. While this cash figure has drastically increased, their current liabilities have only gone up a small amount. This shows that Verizon’s short term debt is clearly not an issue and their cash from operations is more than enough to take care of any short term creditors. Also, since Verizon has the capability to pay back its current liabilities faster than the beginning of the year, it has more cash on hand to put back into the business. If this cash is used to purchase new assets, Verizon will continue to become less leveraged than it currently is because the gap between total assets and total liabilities will widen.

There are plenty of arguments to be made against Verizon, such as heavy competition causing price wars, however, I firmly believe debt is not one of them. The company has managed to improve their debt situation in most aspects in the last couple of years. Whether it be financing with equity more often or having a greater ability to pay back short term creditors, debt will not be a problem for Verizon in the future. As a shareholder, this reassures me that the company is not in any danger and will be a safe long term investment.

Ratios such as the ones I analyzed never tell the complete story of a stock, but they help emphasize and explain some important aspects of Verizon’s debt situation. It’s important to analyze all parts of a company before investing, and in my opinion, Verizon’s improved debt situation along with 5G rolling out and potential tax cuts on the horizon make the stock one of the best to hold long term.

Disclosure: I am/we are long VZ.

About this article:ExpandAuthor payment: $35 + $0.01/page view. Authors of PRO articles receive a minimum guaranteed payment of $150-500.Tagged: Investing Ideas, Long Ideas, Technology, Telecom Services – DomesticWant to share your opinion on this article? Add a comment.Disagree with this article? Submit your own.To report a factual error in this article, click here