Venezuela’s oil industry is in crisis.

What was once the backbone of Latin America’s most prosperous nation is now a constellation of rundown projects, shuttered infrastructure and empty stillness.

The workers, who years ago enjoyed some of the best benefits among Venezuela’s public and private employees, have paid the highest price for their country’s spiral into hyperinflation. Their salaries are now worth just a handful of dollars.

The small northeastern town of Punta de Mata, in the state of Monagas, used to be the heart of the industry. Now it’s a microcosm of the nation’s crisis.

“When we started working in 2005, there were several wells working. Now you rarely see five or six wells working, at least in this area,” says Jose Luis Ramirez, a rig operator at one of the wells Chinese oil company CNPC operates as part of a joint venture with Venezuela’s state oil company, Petr贸leos de Venezuela, or PDVSA.

Ramirez, speaking in a calm voice, detailed his daily struggle to get to the end of the month.

“We have to sell our trousers to live. The boots, the gloves, every time we receive the kit, every few months, we have to sell it to buy food,” Ramirez said.

Most of his colleagues, too scared to get into trouble or lose their jobs if they speak out, preferred not to speak to CNN.

“An arepa with just butter is still better than an arepa with nothing,” Ramirez said, referring to the omnipresent corn pancakes that are Venezuela’s staple food.

Many of Ramirez’s colleagues can no longer afford arepas. An oil worker who did not wish to be identified recalled that his salary used to be more than enough to feed his five children, and buy extras.

A family like his would need almost 30 million bolivars per month, according to consumer groups. His salary as an oilman earns him approximately 2.5 million Bolivars.

“Sometimes I cry alone, because I can’t give my kids what they are asking for,” the oilman added.

Only selected entities can exchange bolivars at the government’s privileged rate. Most exchanges operate on the black-market dollar rate, which is illegal but commonly used all over the country.

Even though the government has repeatedly increased it, the monthly minimum wage cannot keep up with inflation, causing the price of food to increase.

The value of a salary has collapsed.

To supplement his income, the oil worker doubles as a taxi driver in the semi-deserted streets of Punta de Mata. When he started 10 years ago he had a decent salary as an oilman, but gradually his income became more and more dependent on his second job. As a cab driver, he can set prices according to inflation, while his fixed salary working the oil wells stays the same. 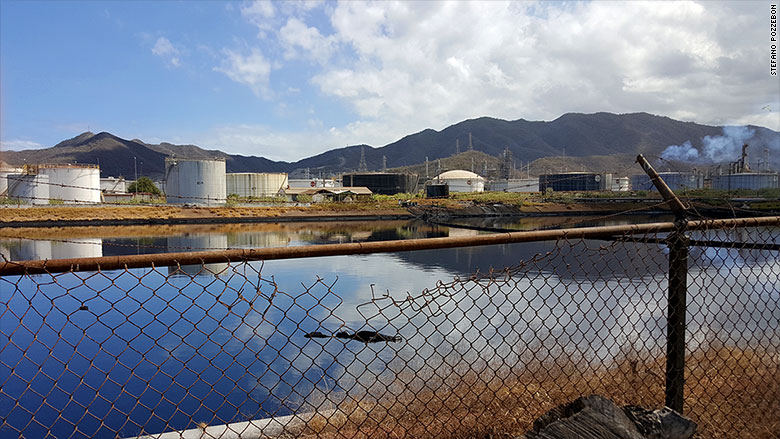 An articifial basin for oil byproducts at a PDVSA oil refinery.

Venezuela’s oil company, PDVSA, used to be the main source of foreign income for the government. When crude was trading at more than US $100 per gallon, earnings for the company were counted by the billions, according to company reports.

Now, PDVSA can barely stay afloat, forced to import light crude from the United States to dilute the heavy oil it drills in Venezuela.

Crude production has been falling for the past 25 months, OPEC numbers show. In April, neighboring Colombia surpassed Venezuela as a net exporter of oil to the United States.

Venezuela now produces almost half the oil it did in the late 1990s, when late president Hugo Chavez rose to power and launched his “Bolivarian Revolution.”

“PDVSA is broken for lack of investment, lack of maintenance in all its processes, for years. Now, the crisis is deepening every day,” said Jos茅 Bodas, a union leader at a PDVSA refinery on the northern coast in Puerto La Cruz.

Production figures for PDVSA’s facilities are not public, and the company did not answer several requests for comment on this story.

The numbers that tell the tragedy of the Venezuelan crisis are comparable to those of a civil war or a foreign invasion.

Iraqi oil production crumbled to zero in March and April 2003 following the US-led invasion, but by January 2004, it had already rose to pre-war levels. Venezuela’s production, instead, is slowly collapsing. It lost approximately 1 million barrels per day in the last two years, according to figures from OPEC and Standard & Poor’s.

These numbers translate into a concrete jungle in the countryside around Punta de Mata, where most oil wells are not in operation.

The narrative follows a common pattern. A mechanical part breaks down, but there are no replacements so the oil well falls into disuse. Once a well is exhausted, no new wells are drilled. If an accident requires a well to be shut, it is not reopened. 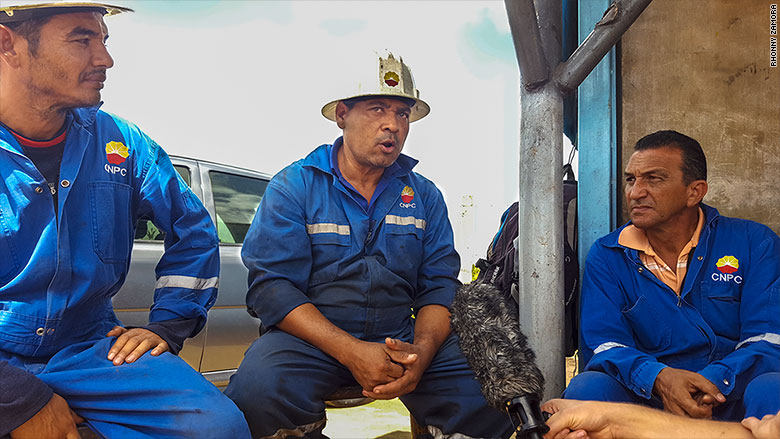 But there’s something much worse than wells shutting down. Several workers related tales of criminal bands targeting the wells in the middle of the night, stealing everything from the oilmen’s mobile phones to excavators and trailers.

One well operated by Chinese company CNPC was attacked in the second week of January. Three of its workers confirmed, speaking on the condition of anonymity, that several masked criminals entered the well precinct and subdued eight workers and a National Guard soldier on patrol and stole about three vans full of computers, TV screens and office machines. One these men witnessed the attack, while the other two said they heard about the incident through colleagues. CNPC did not respond to requests for comment.

For many workers, this type of criminality is too common.

“The criminals are armed, I even think they are better armed than the government,” the oilman-turned-taxi driver said. “Everything they find they take it. And nobody fights against them because it’s not that they come just in two or three, sometimes 15 people come in, or more,” he added.

Caught between a worthless salary and the fear of being harmed, many of the oilmen have been asking themselves why they’re still holding on.

“The only thing I am proud for being an oilman,” the oil worker said, “is the health insurance. Nothing else.”