The past few years haven’t been all that great for Under Armour (NYSE:UA)(NYSE:UAA), or for its investors. After growing sales at double-digit rates for well over a decade, the company stumbled mightily when sales growth slowed but spending didn’t.

The end result was a business that had become bloated with too much expense, no longer the agile, high-performance apparel maker leading with innovation. In recent years, management has made its biggest priority to right-size its operations and corporate structure, with the idea that a leaner Under Armour would be both more profitable in weaker demand market cycles, but also more nimble and able to address challenges and seize opportunities. 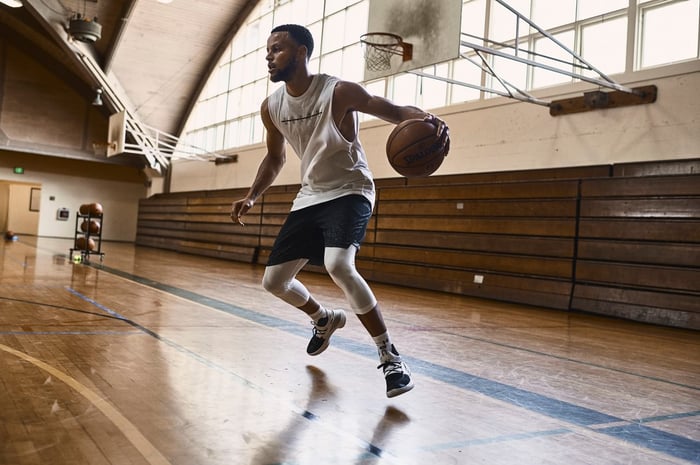 It’s looking like Under Armour’s restructuring is starting to pay off, at least according to the fourth-quarter fiscal 2018 results it released on Feb. 12.

Even with weak sales, lower costs are leading to higher profits

Under Armour’s fourth-quarter sales were $1.4 billion, up 2% (3% when adjusting for foreign currency exchange), but gross margin percent increased 160 basis points to 45%. Selling, general, and administrative — or SG&A — expenses also improved, coming down 1% and making up 42.3% of total revenue versus 43.4% of revenue year over year.

The combination of better margins and lower operating expenses really paid off on the bottom line. The company reported a small GAAP (generally accepted accounting principles) profit of $1 million, while its adjusted net income of $42 million, or $0.09 per share, and adjusted operating income of $40 million helped the company come in well ahead of both investor expectations and its own guidance from mid-December.

For the full year, Under Armour’s sales increased 4% to $5.2 billion, while gross margin was flat at 45.1% and non-GAAP adjusted gross margin was 45.5%, up 30 basis points. Full-year SG&A increased 4%, while the company took $204 million in restructuring-related charges over the course of the year. This actually came in $16 million below the high end of guidance for these expenses and helped to boost its bottom line.

No standout product segments, but international growth is making up for weak domestic sales

For the full year and in the quarter, none of Under Armour’s product segments delivered blowout results. Apparel and footwear sales were up 5% and 2% for the full year, while accessory sales fell 5%. For the quarter, they were up 2%, down 4%, and down 2% respectively.

Geographically, North America — Under Armour’s biggest segment, which makes up about two-thirds of sales — continues to struggle. Sales in the region dropped 6% in the quarter and 2% for the full year.

Over a similar period and in the same region, bigger competitor Nike (NYSE:NKE) delivered far better growth numbers. In its fiscal 2019 second quarter (which covers the September-November period), the company reported 9% sales growth of its core Nike brands in North America. This emphasizes that Under Armour has a lot of work to do to regain lost ground in its biggest market. Considering that the Nike brand alone generated $3.8 billion in sales in North America last quarter alone, the market remains plenty big enough for Under Armour to grow its results by a meaningful amount.

The company touted a big improvement in its cash balance, which was up 60% or so year over year. But the reality is that its balance sheet is in similar shape to where it was a year ago.

However, it’s worth noting that most of the increased cash is from working capital changes, not strong cash generation. Furthermore, its long-term liabilities are not substantially lower versus one year ago. Nonetheless, having more cash on the balance sheet, versus having that money tied up in other assets like inventories, is a net positive.

For 2019, the company affirmed the guidance it gave during its investor day on Dec. 12. That guidance calls for sales growth between 3% and 4%, with North America sales flat (which would be an improvement from 2018’s decline), while its restructuring efforts should pay off with higher gross margins, which are forecast to be 60-80 basis points higher than 2018 levels.

Add it all up, and Under Armour’s weakness in its biggest market — the U.S. — is set to continue weighing on growth, but there’s clear evidence that its multiyear restructuring plan is starting to pay off with better profits and cash flows. That’s a step in the right direction.