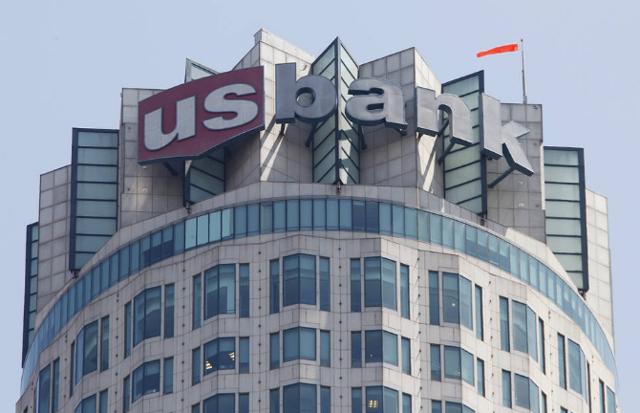 US Bancorp (NYSE:USB) has long enjoyed a premium valuation over the rest of the large banks our country has to offer. The bank’s ability to generate other worldly returns when the rest of the industry seems to struggle has no doubt contributed to investors’ love affair with the stock. That has resulted in a stock that seems very expensive relative to its peers at all times but is USB good enough to have earned that distinction? Operating on the assumption that bank valuations are driven largely by return on equity, I’ll take a look at USB’s balance sheet and ROE for the past decade and determine if it is still worthy of its lofty valuation.

I’ll be using data from USB’s Qs and Ks for this exercise. 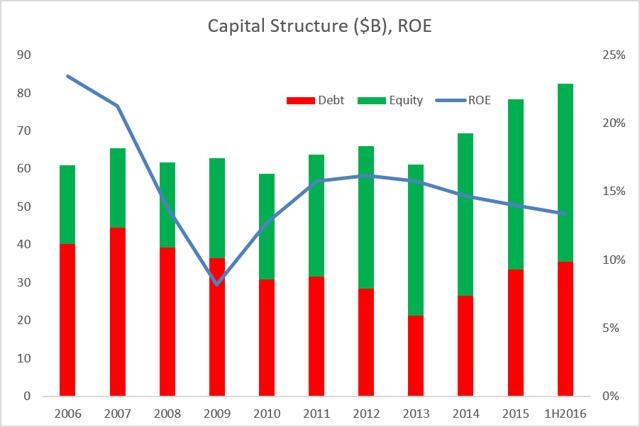 There’s a fair amount going on here so let’s first define what we’re looking at. The red bars are USB’s total long-term debt, the green bars are the company’s equity and the blue line is the company’s average ROE for the period. Combining the debt and equity pieces gets us a total capital structure number, something I find useful for seeing how a bank’s size grows (or shrinks) over time. With that out of the way, let’s dig in.

The first thing I noticed about USB when looking at this data is that it never went for the high leverage of enormous debt balances. That was pretty common heading into the crisis as most of the big banks borrowed tens of billions of dollars in order to leverage their balance sheets. That, of course, helps boost ROE because the amount of equity relative to the overall size of the balance sheet is small, meaning that any returns generated on the debt make ROE look positively huge. Of course, the downside is that when things go wrong, they go very wrong and we obviously saw that with names like Bank of America (NYSE:BAC), Wachovia and Citi (NYSE:C).

But USB resisted that urge and in fact, its long-term debt was never more than 68% of its entire capital structure. While that’s still high, other names reached much higher levels heading into the crisis. But one thing USB did that others did not is quickly reduce its leverage when it became apparent that was not a prudent course of action any longer. From its peak of 68% of the total capital structure in 2007, USB’s debt fell to just 35% in 2013 and has ticked up to 43% as of the first half of this year. That is a very manageable number and to be honest, we shouldn’t expect anything less from USB given its track record.

So we’ve established that USB’s capital structure is now tilted towards equity instead of debt, but what has that done to its ability to generate returns on its equity? USB, like many others before the crisis, generated gigantic ROEs in part because debt balances were so high. USB’s ROE in 2006 was 23.5%, a number I’d be willing to bet we never see again. There simply isn’t room in the regulator-dominated world we live in for banks to produce those kinds of returns and indeed, USB hasn’t come close to replicating that level of productivity.

In fact, USB’s post-crisis high of 16.2% set in 2012 has become the gold standard among the large banks. Unfortunately, for USB and its shareholders, it seems those days are gone and as time passes, USB gets closer and closer to ‘normal’. Its ROE has fallen steadily since that 2012 peak and was 14% last year and fell to 13.4% in the first half of this year. That means that as time goes on, USB is becoming less and less productive but getting back to the premise of this article, if bank valuations are largely based upon ROE, what impact does that have on the stock price?

ROE is the reason names like BAC and C have remained depressed despite earning tens of billions of dollars in profits and why USB has sported its premium valuation for all these years but if USB’s ROE is reverting to the mean, shouldn’t the valuation? I’ve long argued that USB isn’t as good as its stock price suggests and while I would never say USB was anything but a tremendously well run bank, there comes a point where the premium is simply too large; I believe we are there.

USB is going for 13.5 times this year’s earnings when the other big banks are closer to 10 or 11. That’s a huge discrepancy and while I agree USB is special, it isn’t that special. But you don’t have to take my word for it; just look at the ROE line in the chart above. The simple fact is that USB’s ROE numbers continue to fall – even this year – and that means its premium should fall as well. But it hasn’t and that makes me very cautious on USB until it either builds its ROE back up or until the stock falls. Neither has happened yet so I remain on the sidelines.