TRON prices fell 2.8% on the day, despite news that CEO Justin Sun plans to use office space in San Francisco.

Because of the close proximity to the U.S. offices of Alibaba Group Holding Ltd. (NYSE: BABA), which appear to less than a five-minute walk, investors are speculating the duo will form a partnership. 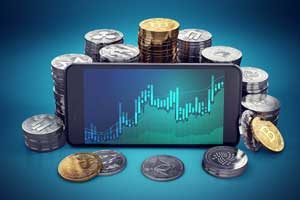 Sun is also a prot茅g茅 of Alibaba founder Jack Ma.

In Bitcoin news, prices dropped nearly 7% over the last 24 hours as part of a broader sell-off in the global cryptocurrency space. The world’s largest cryptocurrency has faced new regulatory pressures in recent days.

Traders are analyzing the plans of Chinese regulators to reduce electricity access to some Bitcoin miners.

Meanwhile, Ethereum trading experienced a significant bout of volatility before leveling off this afternoon. The world’s second-largest cryptocurrency by market cap hit an all-time record last night after topping $1,200.

Below is a recap of the top cryptocurrency prices at 2:00 p.m. EST.

Now that we know all of today’s price movements, here’s what has been moving these cryptocurrencies…

On Monday, the market capitalization of the global cryptocurrency sector hit $741.14 billion. Bitcoin comprised just 34.3% of the total crypto market as traders pour more capital into alternative coins and speculate on ICOs heading into the New Year.

The so-called “dominance” of Bitcoin is sitting near its lowest level ever. At the beginning of 2017, Bitcoin represented more than 80% of the crypto market.

Ripple in a Free Fall

The price of Ripple plunged more than 25% over the last 24 hours.

The currency had shot from $0.20 to more than $3.50 in just a few months, as traders went crazy over speculation surrounding the coin potentially being added to Coinbase in 2018.

Must Read: Why Did Charlie Lee Sell All His Litecoins?

Still, it appears that the recent run-up overheated XRP.

The private-messaging firm Telegram is exploring the largest pre-initial coin offering in history to fund a new cryptocurrency and blockchain platform.

According to TechCrunch, the deal could raise a whopping $500 million.

The report indicates that the company’s Telegram Open Network (TON) would use the new cryptocurrency for user payment processing.

The public distribution phase of the project would likely bring the value of TON to at least $3 billion.

Up Next: Never Miss a Cryptocurrency Opportunity Again

Did you know we have a free research service that finds the most profitable opportunities in cryptocurrencies today?

It gives you real-time recommendations and price updates on only the best ways to make money now.

Here’s everything you need to know.