Shares of Canada Goose (GOOS ) plummeted over 13% through mid-afternoon trading Thursday, despite posting better-than-projected quarterly financial results. Therefore, the downturn might have been caused by broader retail worries.

Canada Goose saw its adjusted Q3 fiscal 2019 earnings surge nearly 60% from $0.46 per share in the year-ago quarter to $0.73 a share, which crushed our $0.58 per share Zacks Consensus Estimate. At the top of the income statement, the high-end parka company’s revenues surged over 45% to reach $302.17 million. This also blew by our $260 million estimate.

Investors should also note that the company operates a relatively high-margin business. DTC’s gross margin came in at 76.1%, down slightly from the year-ago period’s 76.5%. Company executives noted that higher labor costs accounted for much of the decline, which impacted the wholesale business more.

Despite the strong showing, Canada Goose saw its stock price plummet 13.5% through mid-afternoon trading Thursday to rest at $51.23 per share. It is very possible that the big downturn can be attributed to the fact that the Commerce Department said Thursday that retail sales fell a seasonally adjusted 1.2% in December from a month earlier to $505.8 billion. This marked the largest drop since 2009, which could be a worrying sign for retail investors.

Investors will see that shares of GOOS are still up huge since the firm went public in March 2017. Plus, Canada Goose stock has crushed the S&P 500 over this stretch, along with the likes of Lululemon (LULU ) and Nike (NKE ) . With that said, shares of GOOS sit roughly 29% below between their 52-week high of $72.27 a share. This might set up a solid buying opportunity for those high on the company. 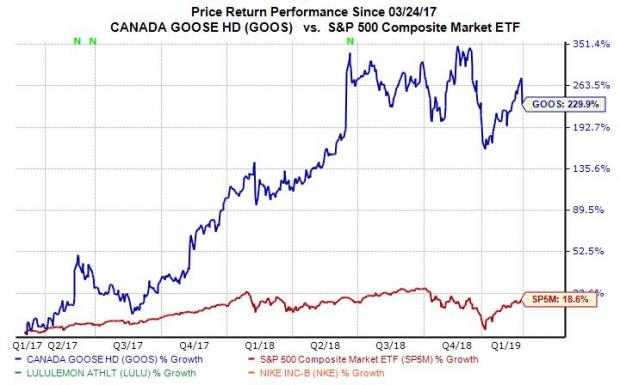 Looking ahead, Canada Goose executives expect annual revenue to grow in the mid-to-high 30s on a percentage basis in fiscal 2019. This is up from an “at least 30%” projection. Meanwhile, the firm upped its earnings outlook from at least 40% to the mid-to-high 40s.

Canada Goose is more optimistic based on expected growth in China and its other regions as the company rolls out more physical retail locations. The company, which sells parkas that cost as much as $1,500 and $395 sweaters, currently boasts 11 flagship stores, with locations in New York, Beijing, Hong Kong, London, Tokyo, and many other major metropolitan hubs.

The company’s jackets can also be found at higher-end department stores such as Nordstrom (JWN ) and on Amazon (AMZN ) , among other sites and stores. “We have successfully entered new markets, introduced new product, and increased capacity to meet growing demand in both channels,” CEO Dani Reiss said in a statement. “We remain deeply confident in the long runway we have ahead.”

In the end, Canada Goose stock might be attractive at its current price point, with the company’s top and bottom lines expected to surge in 2019.