2019 has been a great year for marijuana stocks so far, and cannabis companies are enjoying strong growth. The opening of the Canadian recreational cannabis market was a landmark event for dozens of companies vying for position in the budding industry, and investors have tried to predict which players in the field are most likely to be long-term success stories.

Late last week, Canopy Growth (NYSE:CGC) reported its latest quarterly results, and investors were happy to learn about all the initiatives that the company has going for the future. Co-CEO Bruce Linton and his executive team had several promising comments about where they see the business headed, and they laid out parts of their strategy for what they see coming in the near future. 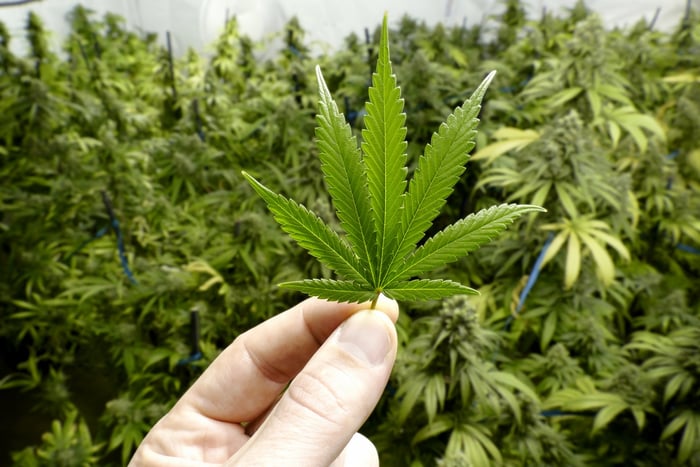 1. Retail store locations are a key part of Canopy’s growth

The most active selling points aren’t correlated directly with the number of people in the province. It’s strongly connected with those places that have stores. … We’ve educated over 600 people who work in the cannabis sector as salespeople with a self-paced training program, which means the customer walking in is much more informed.

There’s a sense among marijuana investors that customers have been waiting so long to have legal cannabis that they already know exactly what they want. But that’s not really the case, and many people need support in order to figure out which cannabis products are best suited to their needs. Linton understands that having smart salespeople in retail stores will be essential in proving out the benefits of Canopy’s brands over the competition, and especially as new products like cannabis-derived oils become more popular, the opportunity for customers to visit retail locations and get assistance will be increasingly crucial.

Management continues to [believe] significant demand will develop for cannabis oil and particularly Softgels in the recreational market. As such, the company continues to increase inventories of extract-grade dried cannabis held for conversion and increase the quantity of cannabis oil and Softgel caps that we have on hand.

Canopy has worked hard to boost its capacity to produce dried cannabis, but in many ways, that part of the market is most likely to become commoditized over time. As a result, Canopy is looking for ways to try to stand out from its competitors, and emphasizing the use of specialized products like cannabis-derived oils and the Softgel capsules that have already seen heavy demand from consumers is a good long-term strategy for the company. That, combined with the further development of brands like Tweed and Tokyo Smoke, will be important for Canopy’s ability to sustain and build market share.

3. Despite hemp’s legalization, the U.S. market is far from homogeneous

The recently passed U.S. Farm Bill legalized hemp products, and Canopy Growth immediately made a big strategic move to build up capacity for U.S. hemp production by announcing plans to build a facility in upstate New York. Linton sees multiple industry park-sized hemp production facilities in several key states, with the hope that they’ll eventually ease the transition toward having points of sale to offer hemp products to customers in those areas.

4. Latin America will be important

Our Latin America activities haven’t had as much visibility because we’ve been eligible to keep them a little quiet. But that group is now about 70 people operating across four countries with production assets well under way in construction, which will start to show up as real, I’ll call it, both assets and yields over the balance of this year.

Most cannabis investors have focused almost entirely on Canada and the U.S., with a few nods to areas in Europe where medical marijuana has been picking up steam. But Linton sees Canopy Growth having worldwide scope, and building up a presence in areas like Latin America — where other players in the marijuana market haven’t really devoted much attention — could be a key element of building a truly global brand.

Those are all great questions, and I have to think that if I give a really clear full answer, that would be advantageous to parties we’re not here to help.

Investors want details about which products, retail channels, and pathways to greater U.S. penetration Canopy will pursue, but they also need to understand that the more the company reveals its strategy, the easier it’ll be for competitors to ride on its coattails. Canopy has a huge first-mover advantage, but that doesn’t mean it can be completely transparent. That’s a balancing act for any public company to walk, but Canopy’s doing a good job so far of giving useful information without giving away everything.

Canopy Growth isn’t the only big player in cannabis, but it wants to retain its industry-leading position in the space. With so much support both internally and from its key partners, Canopy has the potential to stay ahead of the pack as a first mover in marijuana for a long time to come.