Stocks finished the weak lower as Brexit fears sunk sentiment and the Federal Reserve did little to boost confidence even as it left interest rates unchanged. 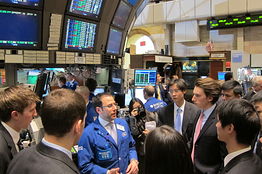 Brexit isnt exactly new news, but suddenly its all the rage as a market driver. Economists are universal in their vote to stay, but Brexit is about more than just the economy. The bloke on the street is thinking about immigration, which adds a whole dimension beyond economics to the logic and possible outcome. Enough of our two cents, lets talk real money. The polls are one thing, the betting parlors another. The latter, the money, is betting on the no-go vote. The Investors Intelligence Survey, which we allude to from time-to-time, offers a warning sign when bulls greatly outnumber bears. However, it is a measure of market letter writers and, trust us on this one, what do they know? More worrisome, its a survey. We rarely mention Put-Call Ratios, but we follow them the buying and selling of Puts and Calls. Both measures are useful but if the truth be known, we will always lean to what people/investors actually do, versus what they are saying. So when it comes to Brexit, we vote with the money…Brexit isnt discounted, regardless of whether the vote is stay or go. Its one of those known unknowns, which should make for a volatile week.

Once the results of the Brexit vote are known, the resilience of U.S. equity markets will depend on their technical footing. There are serious lingering concerns regarding high valuations and declining margin debt. Yet breadth is strong, bellwethers are stable, and downside leadership has diminished…The Advance-Decline Line is still leading the S&P 500 a sign that market participation is broad and relatively strong. Even though this indicator pulled back slightly over the past few days, it remains very close to the all-time high hit on June 8.

We’ll find out next Friday–the day after the Brexit vote–whether that will be enough.