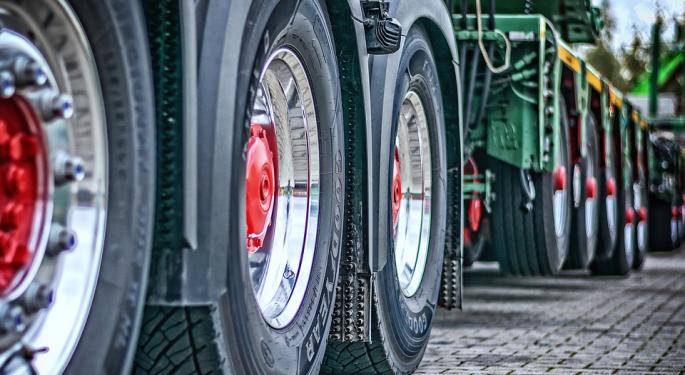 The widely followed Dow Jones Transportation Average Index just had its best day of 2017 and is now up nearly 11 percent year-to-date. There are several signs that this rally is not a one-day wonder.

Part of the issue confounding transportation stocks this year is that some components of the Dow Jones Transportation Average Index have not reacted as expected to perceived positive catalysts. For example, with oil prices low, it would have been reasonable to expect more of a boost for airline stocks.

“This sub-par activity for the transportation sector is not for lack of investor enthusiasm. In fact, Airlines have had a fairly headline-heavy year (for better or worse) including high-profile positions undertaken by notorious airline bear Warren Buffett in United Continental Holdings (NYSE: UAL), American Airlines Group Inc. (NASDAQ: AAL) and Southwest Airlines (NYSE: LUV),” said Direxion in a note. “Couple that with continuously low crude oil prices and a presidential administration that campaigned heavily on rebuilding U.S. infrastructure, and transportation stocks should be having a record year.”

The Direxion Daily Transportation Bull 3X Shares is designed to deliver triple the daily returns of the Dow Jones Transportation Average. As is the case with any other leveraged ETF, TPOR is a trade, not an investment, meaning traders should use the fund over intraday time frames, not a buy and hold the product. Airlines account for nearly 19 percent of TPOR's underlying index, making the group the index's third-largest sector weight.

TPOR is a leveraged ETF for aggressive traders to consider from now through the end of 2017 because some transportation stocks historically perform well in the fourth quarter.

“The fourth quarter may be the index’s best opportunity to turn around its anemic 2017,” said Direxion. “Over the past five years, the index’s Q4 performance averaged over 7 percent growth and only ended the quarter down once in that span; in 2015. Delivery companies like FedEx Corp. (NYSE: FDX) and United Parcel Service Inc. (NYSE: UPS) typically drive the Index around the end of the year.”

Some railroad and airline stocks also have a penchant for solid fourth-quarter performances. Shipping and railroad stocks combine for over 56 percent of TPOR's roster.

Some Dividend ETFs Could Toss GE.

It's Not All About Fees With ETFs.