Maybe you can tell me.

Is this an unpatriotic way to profit?

I hope not because with oil prices starting to run, this is a trade that we need to get on right now if we want to exploit.

Read on below. And feel free to share your thoughts to EdgeFeedback@AgoraFinancial.com.

I follow what the best investors in the world are doing for a simple reason.

They make the best investment decisions!

In fact, GMO believes that they have never seen a single asset class that is more attractive relative to other opportunities than emerging market equities are today

Those are strong words from a legendary investment shop that was established in 1977, manages $77 billion, and has built its success on weighting its portfolios around asset class valuations.


These aren’t guys trying to sell us something. This is the conclusion that they have reached through cold, objective statistical analysis.

GMO’s exact words on this matter in their Q2 letter were:

“But, on a measure that really matters to us for portfolio construction, emerging value today is the best asset we have ever seen. That measure is its margin of superiority the amount by which it is better than the next best asset on our forecasts.”

In the chart below, GMO captures this margin of superiority.

The firm believes that emerging market equities are likely to outperform the next best asset class by 6 percent over the next 12 months. Which would mean that now is the time to take advantage of this bargain opportunity. 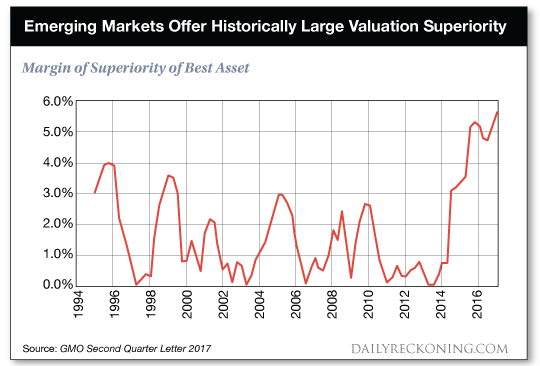 It isn’t cheap. It is generationally inexpensive and rising oil prices is a short term catalyst to remedy that.

The market is Russia. Just check out the graphic below to see how incredibly inexpensive Russian stocks currently are.

That is correct. I said five times earnings for an entire market of stocks.

The deal gets even better when you realize that those earnings are set to move significantly higher.


The Russian Market Has Never Been This Cheap

Now I know what you are thinking. Russian stocks should be cheap, the political risk involved merits a discount.

And yes, I agree.

However, I don’t believe that Russian stocks should be anywhere close to this cheap and historically they haven’t been.

If you invert the price to earnings ratio you would get the following formula:

I like to invert the price to earnings ratio like this because it helps me think about the return that I’m actually getting when I purchase a security.


The Russian market is trading at five times earnings, or a whopping 20% earnings yield! To find that kind of valuation on a single stock you would generally need to look to a slowly dying business or one with a massively overleveraged balance sheet.

The entire Russian stock market is neither of those.

In their 2017 Q2 investor report, the investment firm Pure Value Capital provided some historical perspective on the Russian stock market. Pure Value compared the current valuation of twenty major stock markets around the world against the historical valuations of those markets.


The table below presents what they found. 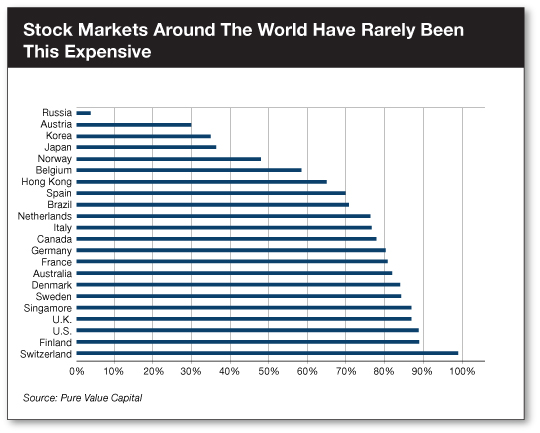 Does anything stand out to you about the chart?

I bet it does. The vast majority of stock markets are priced around the 80th percentile. The United States for example has been cheaper than today 89% of the time. Rarely has it been more expensive.


Like the U.S. market, most markets look very expensive historically.

Then there is the Russian market. It sticks out like a sore thumb sitting at 4 percent which means that it has literally almost never been this inexpensive.

That basically tells us that there is only one way for the Russian market to go. Up!

And with oil prices rising I believe that move is on the verge of happening.

In fact, the Russian economy is already on the upswing since oil prices have started rebounding.

My favorite way to play Russia is the VanEck Vectors Russia ETF (RSX). With over $2 billion in assets it is a very liquid way to get exposure this very cheap stock market.