At any given moment during the U.S. trading day, tens of thousands of readers are checking stock quotes and watching market data on MarketWatch.

And we, the editors of MarketWatch, are watching back. Not literally, of course: were tracking reader traffic to our quote pages as a measure of interest at that point in time. When news breaks on a particular stock, well watch it jump to the top of the pack — for instance, when United sparked controversy for having a passenger forcibly dragged off a plane. When a stock IPOs, like Snap did this year, well watch to see if it pops up in our most-watched lists… and see how long it can hang in there. Over time, well watch how overall patterns shift. 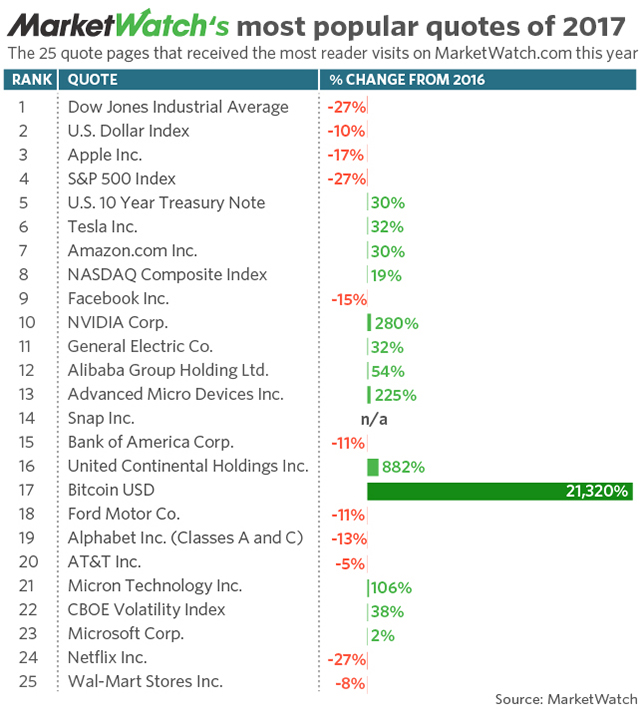 Note: We have removed commodities futures from the ranking, given the difficulty in compiling data and comparing between years.


As our editor Jeremy Olshan put it, these numbers are a window into the mentals a quick pulse of interest, anxiety and potential opportunity. As we close out 2017, we analyzed a full years worth of this data to trace underlying trends and pull out key insights for investors looking to the year ahead.

The No. 1 visited ticker on our site in 2017 was the Dow Jones Industrial Average
DJIA, -0.11%
. Thats no surprise, given the index stands as a gauge for market performance, not to mention the many milestones and records it has pushed through this year. DJIA has been, and will continue to be, the most-watched quote on our site over longer periods of time.


Related: All of the important Dow milestones in one chart

But the historically low volatility in 2017 meant less people were checking DJIA quotes than in 2016 — which kicked off with the worst opening week for U.S. stocks ever and ended with a 750-point Election Night dive, then huge rebound. 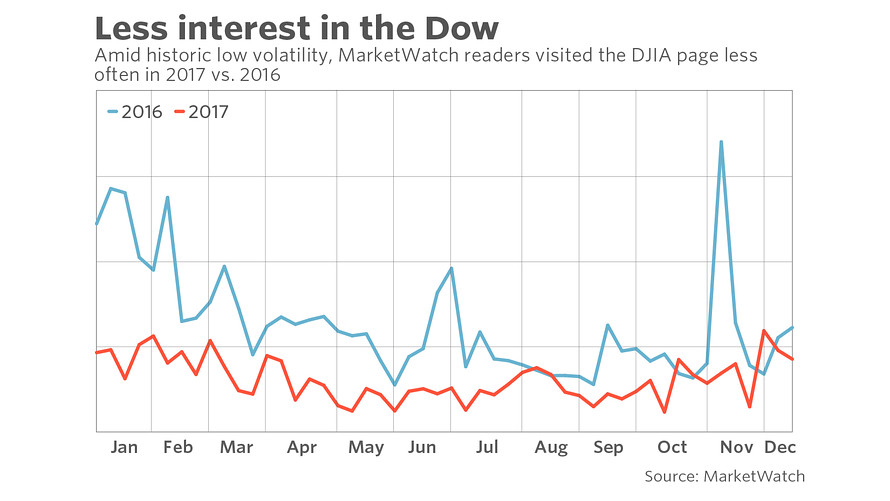 
Apple vs. everyone else

Beyond DJIA, there were some major shakeups in the list of most popular quotes this year, which may point to shifting investor interests.