Netflix is set to gain a new competitor next week when Apple will reportedly unveil its streaming platform.

Netflix shares have risen slightly in the past week and are up 35 percent this year. They are the best performers of the FANG stocks. Miller Tabak equity strategist Matt Maley said the name could still have more room to run.

“This stock already took a little bit of a breather last month and now it’s starting to rally again,” Maley said Tuesday on CNBC’s “Trading Nation.” “The key that’s really going on right now is the stock is seeing a golden cross with its 50-day moving average moving above its 200-day moving average.”

Maley said the charts have a different story for Apple’s stock.

Apple is a 2 percent rally from its 200-day moving average. It has not traded above that trend line since November.

“It will probably have to pull back, consolidate its gains, work off that overbought condition before it can rally further,” said Maley. 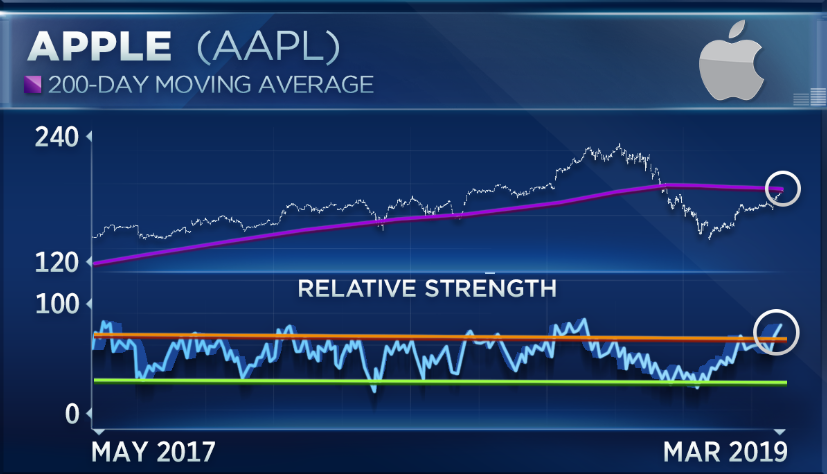 Netflix may have difficulty continuing to grow as increased competition muscles its way into the space, said Gina Sanchez, CEO of Chantico Global.

“Netflix is obviously the one with the most to lose,” Sanchez said Tuesday on “Trading Nation.” “My concern is actually that Netflix may actually paint itself into a corner. Everybody is gunning for territory that Netflix has already created. Netflix has a massive spending budget in order to continue to move a needle that quite frankly is getting harder and harder to move in terms of revenue.”

“You look at the average number of subscriptions that cord cutters have. You’re talking about three-plus subscriptions. Quite frankly, viewers are getting subscription fatigue. At some point you’re going to have to see some consolidation,” Sanchez said.