While some at WSJ didn’t want you to see this story, we think one chart in particular is too important for you to miss.

The story documented how little has changed – or has gotten worse – since the 2008 financial crisis. Particular attention was paid to the role of the big banks.

As the chart below will show, we could now be on the verge of a very similar crisis…

You see, one of the primary causes of the financial crisis was the concentration of power in Wall Street’s biggest banks.

As home prices climbed nearly 50% between 1996 and 2006, banks began loosening mortgage requirements. They even began offering subprime, variable rate mortgages to unqualified buyers. This helped leverage the housing boom into even bigger profits for the banks. At the same time, household debt doubled to $14.5 trillion from 2000 to 2008.

But the banks didn’t stop there…

They tried to squeeze even more money out of the boom by creating complicated and risky mortgage derivatives – or “collateralized loan obligations.” Then the banks took even more risks when they rolled junk subprime mortgages into these complex derivatives contracts.

The result was a mountain of risky junk debt.

Mortgage-backed securities tripled between 1996 and 2007, when their total value rocketed to a staggering $7.3 trillion.

Once the rug was pulled out from under the housing market, and Americans began defaulting on mortgages en masse, these securities became worthless overnight, threatening the entire financial system.

But the banks didn’t pay for their mistakes…

Lehman Brothers – then the fourth-largest investment bank – collapsed in 2007. But the rest of the behemoths were labeled “too big to fail” and given massive bailouts from Congress and the U.S. Federal Reserve.

Congress ponied up $700 billion in bailout money to buy up the toxic assets created by the banks at the center of the crisis. That was mere pocket change to the $7.7 trillion the Fed loaned – undisclosed – to the “too big to fail” banks.

And a decade later, we’re right back where we started with these banks… 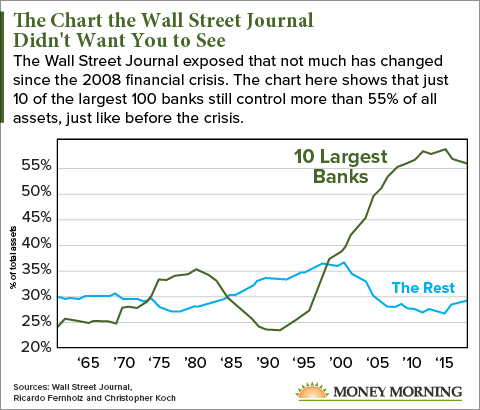 As you can see, these banks exploded in size and power during the 1990s and early 2000s. While the financial meltdown starting in 2007 should have been a warning about their staggering power, nothing has changed.

The 10 largest banks still control more than 55% of all assets of the top 100 banks.

Right now, the same series of events are unfolding that took place in 2008.

Namely, too much debt.

Back then, it was mortgage debt.

And when the default rates on those mortgages hit 4%…

That was enough to send America’s economy into a tailspin.

But fast-forward a decade, and Americans have nearly piled on another $1 trillion in additional debt.

That time it was mortgages.

And just like 2008, defaults on those loans have begun to roll in.

Except they’re much higher than anything we saw during the mortgage crisis.

During the Great Recession, the mortgage default rate was only 4%.

But default rates on student loans are already at 11.5%.

And once again, bankers have figured out a way to profit off of it.

ABC reports that “investment bankers on Wall Street are once again ‘cutting and dicing up [student loans]into collateralized loan obligations.'”

These derivatives have been rolled up into a market worth more than $8 trillion.

For government insiders, the writing is on the wall.

According to an expert at the Consumer Financial Protection Bureau, we have “swapped a housing debt bubble for a student loan bubble.”

And this bubble now stands at a staggering $1.34 trillion dollars.

If you are not willing to lose everything in another market crash, then click here.

Because it’s possible to protect yourself from the coming economic disaster – but you have to act now.