The Dow Jones Industrial Average came close to hitting 20,000, but fell short again…nearly four weeks after Barron’s wrote about the possibility in a cover story on Dec. 10. 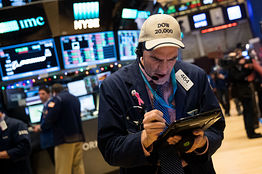 The DJIA is flirting with 20k, all FANG stocks are up, Biotechs have returned to life, and the SPX – amongst others- is making fresh all-time highs for the first time in three weeks.

While all true, the day, itself, isn’t exactly setting many records. The price action has been solidly higher today, but the percentage moves have been average. In other words, there is little emotion behind the move.

That’s not a negative, though. This kind of persistent, controlled advance is what helped the SPX rally +26% from the February, 2016 lows…. that.. and routinely leveraging high level consolidation patterns, like the index is trying to do today…

Today, Large Cap Growth is leading, an area that lagged last year. Clearly, if that area really gets going, it would have an outsized influence on the market-cap based indices like the S&P 500.

Despite the new highs, Wellington Shields’ Frank Gretz is concerned about some of the market’s internals:

A new high in the Advance-Decline Index means no big problems for now. And, while theres no point looking for problems, there are at least a couple of technical issues out there. The 10% post-election rally has been impressive, granted, in some places more than others, like Financials. And theres all the hoopla over DJIA 20,000, yet even after the rally this week, only 67% of stocks are above their 200-day moving average. It seems a bit odd that for all the rally, the new high in the A-D Index and all the rest, only two-thirds of the S&P stocks are in medium-term uptrends, that is, above their 200-day moving average. Granted, things could change, but so far were not even back to the 70% level of just a few weeks ago. Moreover, even the rally off the 50% level of early-November managed only 70%, well short of the 80% level of the summer. Given the short-term backdrop, for now this really is no big deal. However, market tops are about unwinding momentum, and unwinding momentum looks like the picture of stocks above their 200-day average.

As with every market advance, there’s always a reason to worry.