As the gaze into their crystal balls, some financial advisers and strategists who are well-known on Twitter are warning investors to curb their enthusiasm a little.

While Wall Streets big banks are talking about a historical year ahead, with expectations the S&P 500
SPX, -0.52%
and Dow Jones Industrial Average
DJIA, -0.48%
will push further into record territory, the vibe from Twitters finance gurus is that investors should just watch their step a little, maybe cool that market euphoria just a bit.

What else could figure prominently in 2018? It may be a sharp move in oil prices, the return of volatility or even more political mayhem. Read on for the answers to our question Whats one big call youre making for 2018?:

Larry Tentarelli, founder of TrendTradingSignals: For 2018 I have a keen eye on 2017s poor performers, namely basic materials and energy, especially [Diamond Offshore Drilling]
DO, +0.70%
which I have a position in, and retail and restaurants which have done poorly this year, like [Macys]
M, -2.06%
and [DineEquity]
DIN, -0.49%
Gold miners also have done poorly and I am watching all of these groups for potential long term momentum changes. DO, M and DIN meet my buy criteria right now.

Josh Brown, blogger at The Reformed Broker and CEO of Ritholtz Wealth Management: My big 2018 call is that euphoria is the biggest risk for stock-market investors. We show every sign of wanting to go back to that place. If we do, no amount of GDP expansion or earnings growth will be enough to protect you.

Chris Ciovacco , founder & CEO of Ciovacco Capital: Based on the facts we have in hand in December 2017, the markets are telling us to be open to much better-than-expected outcomes for stocks over the next five to 20 years. Our research uncovered a rare and potentially positive development in August 2016, which told us to be open to the bullish case before and after the U.S. presidential election. Since then, numerous major indexes around the globe have successfully completed very long-term breakouts, a topic that was covered by MarketWatch in January 2017. The breakouts have been broad (not just the major U.S. indexes), as shown via the chart of the Value Line Geometric Index, which recently cleared an area of resistance that was in play for 20 years. 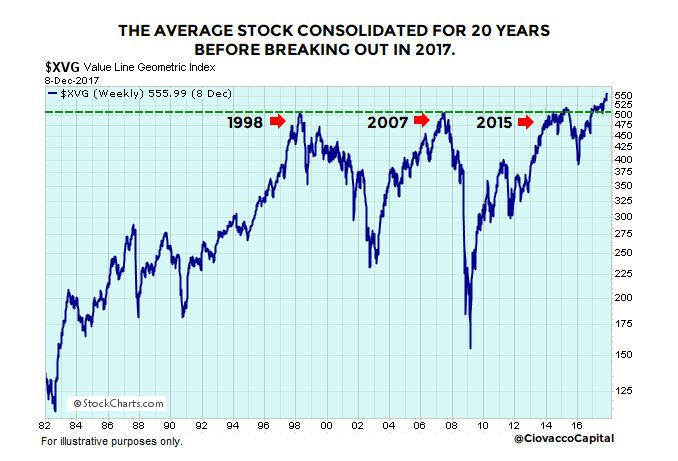 Ben Carlson, director of institutional asset management at Ritholtz Wealth Management: I dont make too many big calls on the markets. Its not that Im against forecasting. Its just that I know its nearly impossible to predict what the markets reaction will be. Even if I gave you the headlines, economic or market data ahead of time, you still might not be able to make money on that information because the markets dont always cooperate. Markets are more about expectations than events so its difficult to plan your investing strategy around these types of predictions.

Read: The most important people to follow among cryptocurrencies

Adam Kobeissi, founder and editor in chief of The Kobeissi Letter: One big call for 2018 is WTI crude
CLH8, +0.45%
is heading to $40 per barrel. There is simply too much United States production and there is a high possibility of OPEC cheating on their production-cut deal. Our subscribers were informed of a bearish setup with a possibility for a highly profitable short position when WTI crude hit $59 just a couple of weeks ago.

Stephen Burns, founder New Trader U: I believe we are at the beginning of a big secular bull stock market and that 2018 will see new all-time highs in stock indexes.

Raoul Pal, former hedge-fund manager and founder of Real Vision Group: U.S. political volatility will become extreme in 2018 and it will increase the volatility in all asset classes. The U.S. political institutions will get rocked to the core The Trump administration, the GOP, the Democrats, the FBI and the Fourth Estate. They are all about to go to war.

Now read: What these investment strategists and analysts regret most about their 2017 decisions