Analysts either love or hate Tesla.

RBC slashed its price target on Monday, suggesting 20 percent downside, and reiterated an underperform rating. Meanwhile, the rest of the Street has an average $335 target, which implies 30 percent upside.

Technical analyst Ari Wald is in the hate-it camp, arguing that aimless price direction means investors should steer clear of the stock.

“This is one we’ve been on the sidelines with, avoiding both on the long end and short side, just given how directionless and choppy it’s been, and that’s still the case,” Oppenheimer’s head of technical analysis said Monday on CNBC’s “Trading Nation.”

In the past 12 months, Tesla shares have moved as high as $387 and as low as $244.59. It is 34 percent off its August peak, a level reached after CEO Elon Musk falsely tweeted that the company had secured funding to go private.

“It’s paid to buy it when it’s ugly and sell it when it starts to look good, so with that in mind it probably looks more positive than not, just considering how bad it’s performed,” said Wald. “Two-hundred-fifty dollars is the big support range level, $360 is the upside there.”

A move back up to $360 marks nearly 40 percent upside from Monday’s close. However, that does not mean Tesla is a buy, says Wald.

“You can see the flat 200-day that exemplifies that directionless action,” he said. “If we allocate toward stocks that trend, this isn’t one of them.” 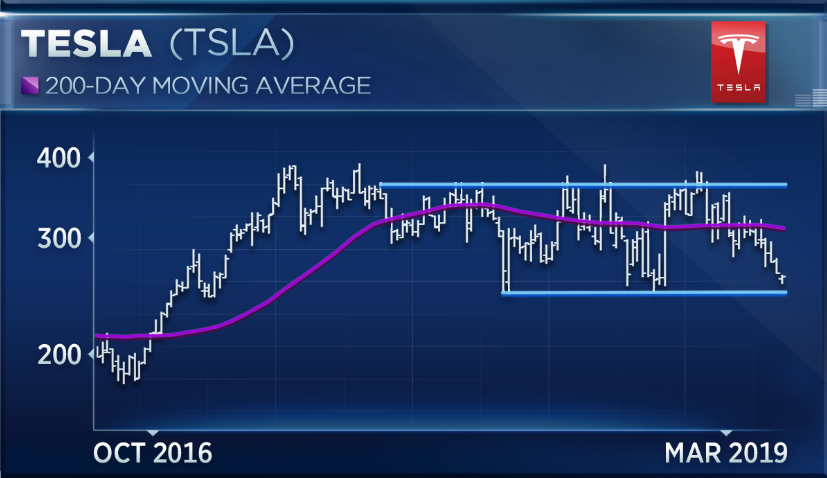 “It’s going to be challenging,” said Sanchez on “Trading Nation.” “You’re looking at cutting deliveries estimates, delivery concerns, cutting demand estimates, and then concerns around margins — that $35,000 price point for the Model 3, there’s big concerns that they’re not going to be able to keep costs down enough in order to really produce a price margin.”

Like Sanchez’s concerns, RBC analysts’ downgraded expectations were tied to problems with its deliveries and the run-on effect on revenue and margins.

“Those don’t add up. Tesla is still being judged as to whether or not it can execute, and clearly the jury is still out,” Sanchez said.