Telstra Corp. plans to cut 8,000 jobs, sell assets and potentially spin off a new infrastructure business in a make-or-break attempt to fend off competition. The stock tumbled.

Australia’s former phone monopoly, which has lost more than half its market value since early 2015, said it will almost double its cost-cutting program. An asset carve-off will raise as much as to A$2 billion, and one in four executive and middle management roles will go over the the next three years.

“We are now at a tipping point,” Chief Executive Officer Andrew Penn said in a statement. “We must act more boldly. Our legacy is now holding us back.”

Under pressure to change course as Telstra’s stock price and earnings dwindle, Penn said Australia’s largest telecommunications company will undergo a “radical simplification.” More than 1,800 consumer and small-business products will be distilled into just 20, helping to eliminate two thirds of customer-service calls by 2022.

Telstra has lost out to smaller rivals after its high-margin, fixed-line access business migrated to a state-run network, and mobile-phone competitors lured customers away with cheaper offerings. The Sydney-based company had its debt downgraded for the first time in 12 years last month by S&P Global Ratings, which cited its vulnerability to price and market-share erosion.

Net reduction of 8,000 employees and contractors New infrastructure business for potential demerger or strategic investor Extra A$1 billion of cuts to take savings to A$2.5 billion by fiscal 2022As much as A$2 billion of asset sales over next 24 months

“If we’re going to be competitive, that’s the scale of change that Telstra needs,” Penn told reporters after the statement. 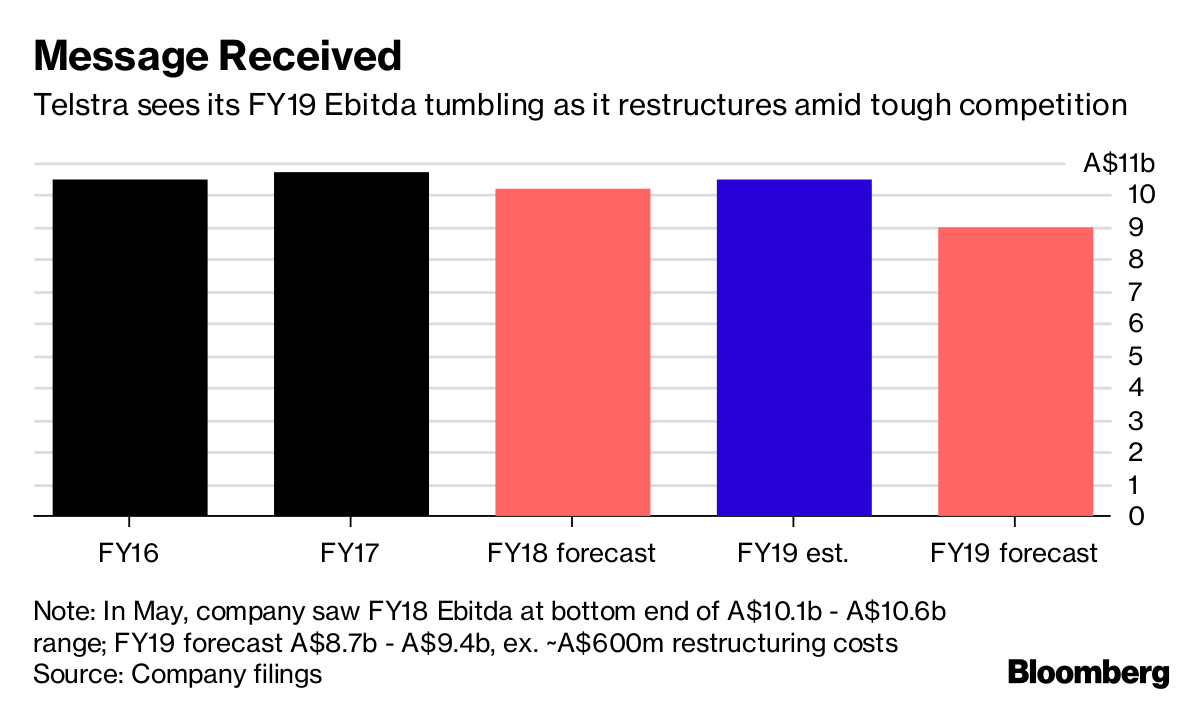 The company said it expects earnings before interest, taxes, depreciation and amortization of between A$8.7 billion and A$9.4 billion in fiscal 2019, excluding restructuring costs of about A$600 million. That compares to analyst expectations of A$10.5 billion.

It will create the new, wholly owned standalone infrastructure unit from July 1, with its own CEO who will report to Penn. Called Telstra InfraCo, it’s expected to control assets with a book value of about A$11 billion and have annual revenues and Ebitda of A$5.5 billion and A$3 billion respectively.

Assets will include Telstra’s fixed-network infrastructure including data centers and international subsea cables. It will sell services to Telstra, wholesale customers and the government-owned broadband network, NBN Co.