Many businesses got a big Christmas present this year when Congress passed a tax bill. But the gift was particularly generous for one industry: Alcohol.

Under a provision that originally slipped into the Senate version of the bill, beer, spirits and wine producers will get a two-year reduction in federal excise taxes worth $4.2 billion.

For Philip McDaniel, who founded a distillery in St. Augustine, Florida four years ago, that means savings of about $150,000 next year. He says he’ll put the money toward hiring more people and buying more equipment for as long as the tax break lasts.

“We’re going to try and make and sell as much as we can to take advantage of it,” McDaniel says. “Hopefully they’ll see the growth, and perhaps they will have the wisdom and the heart to extend it another two years.”


Craft producers seem to be starting up on every street corner in American cities of late the number of small breweries went from 1,460 in 2006 to 5,301 in 2016, according to the Brewers Association. The number of small distillers is up to about 1,300. So why, you might ask, does the alcohol business need a tax break when deductions for many special interests are going away?

Industry advocates say that not all of those craft producers are profitable, considering the level of regulation, high startup costs, and the marketing and distribution hurdles posed by a landscape dominated by booze behemoths like Miller-Coors, Diageo, and AB-Inbev.


“Your first five years are when you’re trying to earn every penny,” says Julie Verratti, who co-founded Denizens Brewing Company in Silver Spring, Maryland in 2014 with a business loan backed by her own house. She estimates the tax break will save her $6,000 in 2018. “Every single bit of that goes back into the business.” 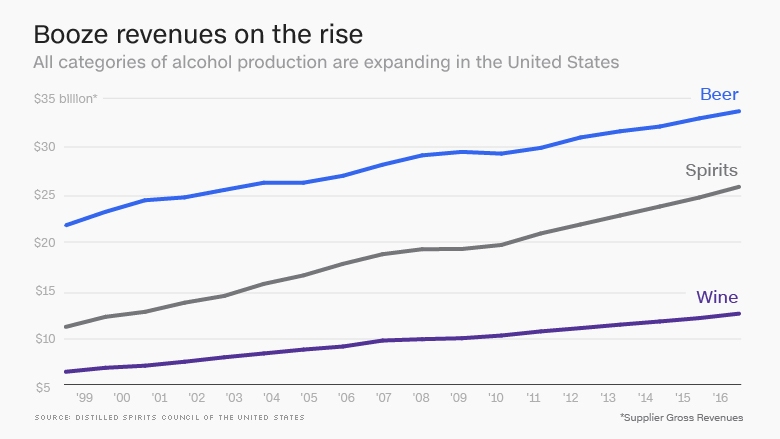 Big companies got a break with this bill as well.


Their tax rate on the first 6 million barrels of beer produced or imported will go down from $18 to $16 per barrel, which creates a savings of $12 million per year for the largest producers. The largest winemakers will also benefit from a tax credit previously available only to small wineries.

Big liquor producers also benefit from slashing taxes below 100,000 gallons, and the rate will decline a bit for larger quantities too on top of the corporate tax cut all of them will enjoy as well.

The measure represents a rare truce between small and large beer companies, which originally had backed separate bills. One of the bills would have lowered taxes just for domestic breweries, and the other would have extended relief to producers headquartered overseas as well.


“In order to get meaningful tax relief for the breweries that I represent, it was necessary for small brewers and big brewers to come together,” says Bob Pease, CEO of the Boulder, Colorado-based Brewers Association, which represents small brewers. “Members don’t like to pick winners and losers.”

In combination, they’re a powerful interest group. Alcohol suppliers and distributors spent $22.6 million lobbying on all issues in 2017, according to Opensecrets, and $12.3 million in campaign contributions during the 2016 cycle.

Those contributions flow to both parties, and the industry has support on both sides of the aisle. Senator Ron Wyden, Democrat of Oregon, sponsored the standalone Craft Beverage Modernization and Tax Reform Act, and Ohio Republican Rob Portman attached a two-year version to the Senate tax bill.

This week, alcohol manufacturers all over America can raise a glass.

“Little wins for us are great things,” says Robert Cassell, the owner of New Liberty Distillery in Philadelphia. “And this is a big win.”