Just as Switzerland’s factories come roaring back, the rallying franc is a reminder of how the currency has the potential to pull the rug from under them.

Industrial production is rising at the fastest pace since before the financial crisis and companies such as Schurter, a maker of electrical components, are seeing sales surge. Gross domestic product figures this week are expected to confirm the economy is growing apace, with economists predicting 2018 will see the strongest expansion in four years.

The better outlook is partly thanks to the franc, which depreciated 7 percent in the past year and late last month reached 1.20, the level the central bank had previously defended. Yet the fragility of the currency’s revival is all too clear, with Italy’s political turmoil, U.S. foreign policy and emerging-market concerns reigniting demands for the safety of the Swiss currency, kickstarting a rally in recent weeks.

A slowdown in the neighboring euro-area economy, Switzerland’s main market, means there’s even a risk of two of the economy’s boosters fading.

Still, the state of affairs is a far cry from 2015, when Switzerland was walloped by what became known as “Frankenshock,” when the central bank abruptly dropped its currency ceiling, sending the franc to near parity with the euro. By the end of 2015, industrial production was falling at the fastest pace in six years, and machinery orders were sinking.

Reflecting the relatively more benign situation now, Schurter reported a 31 percent rise in revenue last year. Ralph Mueller, who runs the family-owned business, attributes that to both the stronger euro area and the weaker franc, as well as the firm’s efforts to develop new markets.

“We’re a very conservative company, but we can always adapt,” he said in an interview in his office near Lake Lucerne. “The period after 2015 exemplifies the strength of Swiss companies to find the energy and the means to get out from between a rock and a hard place.” 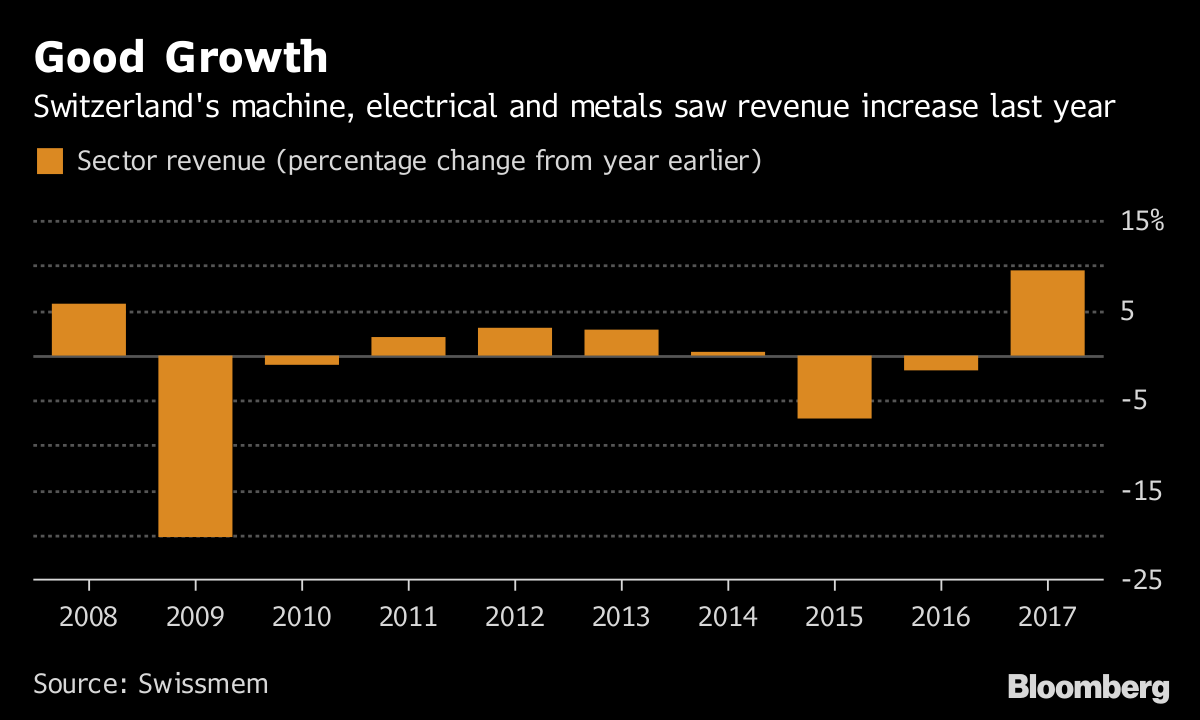 The realignment of the stars in 2017 saw the franc weaken just as the 19-country euro area was in the throes of its best growth in a decade. In the first quarter of 2018, Swissmen, an industry body, reported orders surged 24 percent, and manufacturing confidence is now at its highest since 2011.

While the global economy appears to be humming along, smooth progress for Switzerland isn’t guaranteed.

Mounting trade tensions because of U.S. tariffs pose a risk, as noted by Roland Fischer, CEO of OC Oerlikon AG, a maker of machinery components and gear systems, just this month.

There’s also the threat of the franc continuing its recent appreciation, perhaps on the back of concerns about Italian politics, where the chance of new elections have risen. Having touched 1.20 per euro in mid-April, the currency has since appreciated to 1.16.

Swiss industry appears to be in the best shape in years 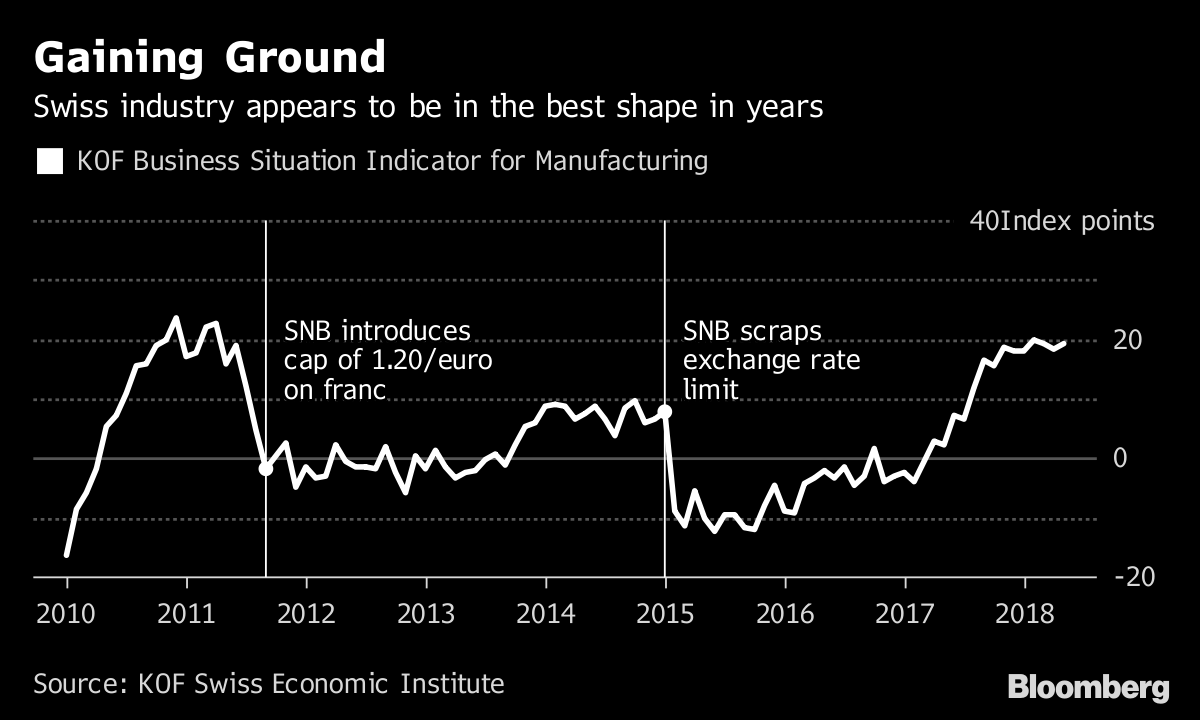 But for now, companies are reaping the benefits. First-quarter order intake at Oerlikon reached an all-time high, and elevator maker Schindler Holding AG said it had a “robust” start to the year. According to an SNB report, companies margins have improved on the back of higher turnover, productivity increases and the stronger euro.

Schurter boss Mueller says that while 2018 may turn out to be another year with double-digit growth, it can’t go on forever.

“There are years where the franc plays into our hands and years where it doesn’t,” said Mueller. “We have to learn to live with that.”

— With assistance by Zoe Schneeweiss, and Andrew Atkinson