Were kicking off a wild week of stock market predictions in style today.

Our first swing at a market forecast for 2018 begins with stocks. Specifically, Im talking about the S&P 500.

Most serious analysts have already said they believe 2018 will be a decent year for equities. The predictions weve read so far peg the S&Ps 2018 performance between 5% – 8%. Another average year for the averages

But thats not what Im seeing.

Yes, I believe the major averages will finish in the green when 2018 ends. But I dont think well see the S&P, Dow Jones Industrial Average, and Nasdaq Composite churn out wimpy, single-digit gains. In fact, I see stocks finishing much, much higher.

My first big prediction for 2018 is that the S&P 500 will finish higher by 20% or more, edging out this years returns to post an incredible two-year run approaching gains of 50%.

I know that might sound crazy especially since so many pundits and analysts are expecting stocks to cool off. But there are a couple of key facts about the current market rally that suggest we are still in the early phases of a melt-up move.

First, its important to note that prior to breaking out to new highs in late 2016, the S&P 500 endured a choppy, two-year stealth bear market that featured major selloffs in speculative names such as biotech and small-cap stocks. 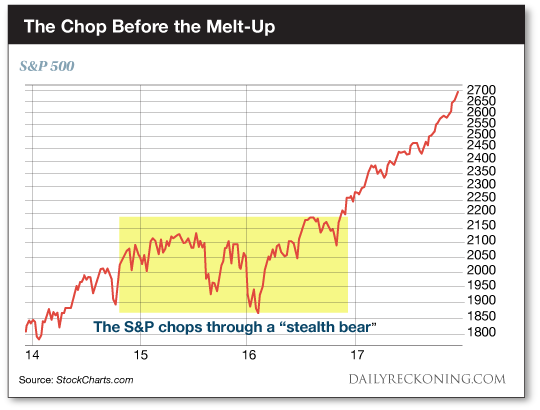 The financial media loves to talk about how the major averages have enjoyed a massive bull run since the 2009 market bottom. One glance at this chart proves this is not the case.

Stocks have not shot higher in a straight line for nine straight years. In fact, stocks have endured multiple pullbacks and corrections since 2009, including a drop of more than 19% in the S&P 500 during the summer of 2011 (which apparently doesnt count as an official correction since it missed dipping 20% by the skin of its teeth).

Furthermore, its important to measure the beginning of bull markets from where the averages first break out to new all-time high. That didnt happen until 2013 for the S&P. So much for the theory that the current secular bull market is long in the tooth.

Including this year, the S&P has risen 20% or more 19 times. After each of these 20% rallies, the S&P was higher the very next year on 16 occasions, posting double-digit gains during ten of those years.

While theres no guarantee the S&P will repeat this years performance in 2018, its wouldnt be an unprecedented market event.

But theres a catch to my market melt-up prediction

It wont be an easy ride.

The S&P 500 hasnt experienced a 5% pullback in more than 13 months. Over the next year, Im guessing well see at least two pullbacks of 5% or more.

Each of these pullbacks will bring out new crash predictions, convincing some investors to cash out before the next leg higher. We might even see some short-term panic. But the market will eventually snap back and resume its ascent. The wall of worry will get a little steeper and the sold-out bulls will pile back into stocks.

For the record, I dont care if Im wrong about my 2018 S&P prognostication. As Ive explained countless times before, even the best market predictions are nothing but empty guesses. Mine are no different. Sure, Im using all the tools at my disposal to try to forecast what the market could do in 2018. But Im not delusional.

Heres the bottom line: I cant control the stock market. No one can. I wont fight the tape if Im wrong. Instead, Ill change my outlook. Thats the only way to survive as a trader period.

Were just getting started with our bold 2018 forecasts. More market calls are on the way this week. Stay tuned