The stock market could face its most turbulent week of trading so far this year, with a trio of potentially destabilizing events on deck: former FBI director James Comeys testimony, the U.K. election, and the ECB monetary-policy meeting. The trifecta, coming nearly all simultaneously on June 8, threaten to derail U.S. equities record-setting run.

The hurricane season is forecast to start earlier than normal this year for the Trump administration as a perfect storm of events is converging, said Chris Zaccarelli, chief investment officer at Cornerstone Financial Partners.

Comey, who was fired by President Trump early last month, on Thursday will testify before the Senate Intelligence Committee on Russias role in the U.S. presidential election as well as whether he was pressured to drop a probe on possible collusion between Trumps campaign and Russian officials.

The Comey testimony appears to be the second act in the latest drama on Capitol Hill and we think this installment only makes the road that much longer to meaningful tax reform and fiscal stimulus, Charlie Ripley, investment strategist at Allianz Investment Management, told MarketWatch.

Stocks have set numerous records over the past months on expectations that Trump will usher in a more business-friendly era through tax cuts and ramped-up fiscal spending.

Aside from Comeys Senate appearance, former Federal Bureau of Investigation director Robert Mueller is overseeing a federal investigation into Russian interference in the 2016 presidential election that could possibly lead to criminal indictments against those in Trumps inner circle.

Across the Atlantic, the British will head to the polls in a snap election to pick their representatives to the House of Commons. Prime Minister Theresa Mays Conservative Party currently has a 17-seat working majority but as support for the Conservatives wanes, the outcome of the election could reshape the U.K. Parliament and lead to greater uncertainty as the country negotiates its way out of the European Union.

On the same day in Tallinn, Estonia, the European Central Bank could set off tremors of its own if it unexpectedly announces a policy shift to wean Europe from its massive stimulus program at its monetary policy meeting.

Economists at Deutsche Bank believe that while the ECB is not yet ready to announce an exit from its quantitative easing regime next week, it could telegraph that a tapering is imminent in a bid to prepare the markets.

Even without the political cliffhangers, the market is entering a rough patch as summer doldrums set in.

Stocks have recorded a median decline of 0.79% in the two-week period between May 30 and June 13 over the past 10 years, according to data from Bespoke Investment Group.

Since 1950, June is among the worst months for stocks with only August and September having worse average returns as the chart from Ryan Detrick, senior market strategist for LPL Financial, shows. 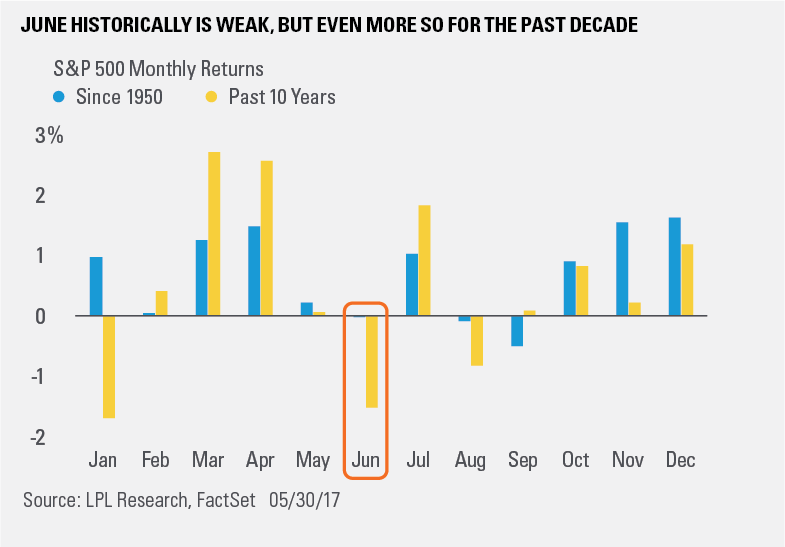 Nonetheless, there are reasons for investors to take heart.

June historically has been a weak month for equities, but the catch is some of the worst drops have taken place when the S&P 500 index was beneath its 200-day moving average to start the month. When the S&P 500 has been in a bullish trendabove this long-term trendlineJune has been higher 59% of the time versus 33% when starting below, Detrick wrote in a recent note.

Stocks kicked off this month firmly above the 200-day moving average, suggesting that any pickup in volatility could be a buying opportunity, he added.

Indeed, the market has been extremely resilient with even poor economic data failing to dampen investors appetite for stocks.

The U.S. added 138,000 new jobs last month, below the 185,000 increase projected by economists in a MarketWatch survey, while the unemployment rate fell to 4.3%, the lowest level since 2001, the Labor Department said Friday.

The tepid number, however, sparked speculation that the Federal Reserve may stop after just one more interest rate hike this year rather than the two widely expected. The Fed could increase rates as early as middle of this month when the Federal Open Market Committee convenes.