Shoppers take their marks on Black Friday as they scurry to big retailers looking for bargains. Though some headlines talk about this day not being as important as in the past, lines of people outside of big box retailers on Thanksgiving night might raise questions about that theory.

Stocks to watch for possible Black Friday impact include Best Buy Co Inc (NYSE: BBY), Wal-Mart Stores Inc (NYSE: WMT), Target Corporation (NYSE: TGT), Macy’s Inc (NYSE: M), Kohl’s Corporation (NYSE: KSS), and Amazon.com, Inc. (NASDAQ: AMZN), among many others. Infotech also could jump into the ring because electronic goods seem to be high on many peoples’ lists. Even though Cyber Monday has yet to dawn, early analysis from some of the major analytic firms suggested a major jump in online sales as of late Thursday, and stock indices moved higher in pre-market trading.


The race for online supremacy between WMT and AMZN could be another source of excitement for investors the next few days (see below). WMT started things off with a press release late Thursday saying it’s sold tens of millions of televisions, video game consoles, movies and toys and turkeys” to millions of customers. It added that it’s now time to “get excited” about Cyber Monday.

Even though it’s tempting to say today is all about Black Friday shopping, investors might also continue to chew over the Fed’s minutes instead of leftover turkey in a holiday-shortened session. Another potential focus is China, where markets tumbled earlier this week before recovering a bit early Friday. The sharp drop in Chinese stocks came as the government there signaled it might believe asset prices are too high.


That’s in the same vein as what investors heard from the Fed on Wednesday. “In light of elevated asset valuations and low financial market volatility, several participants expressed concerns about a potential buildup of financial imbalances,” the Fed’s minutes read. “They worried that a sharp reversal in asset prices could have damaging effects on the economy.”

Stocks fell slightly after the minutes came out Wednesday. Still, it’s important to keep things in perspective and look at the minutes as a whole, rather than just one phrase. Immediately after the sentence quoted above, the Fed added that, “Elevated asset prices could be partly explained by a low neutral rate of interest. It was also observed that regulatory changes had contributed to an appreciable strengthening of capital and liquidity positions in the financial sector over recent years, increasing the resilience of the financial system to potential reversals in valuations.”


Pardon the “Fed-speak.” In real-world terms, what the Fed seems to be hinting at is that low interest rates might be underpinning stocks, as we noted in this column a few days ago. The next point the Fed made is that the financial markets have a stronger foundation than in the past.

Fed participants expressed general optimism about the economy, noting that they expect “continued above-trend economic growth and a further strengthening in labor market conditions,” along with “solid growth in consumer spending in the near-term” and “a high level of consumer sentiment.” That was arguably reinforced Wednesday when the University of Michigan’s consumer sentiment reading for November topped Wall Street’s estimates.


When all is said and done, the minutes didn’t seem to have much effect on market anticipation for a rate hike before the end of the year. The odds of that remain around 91%, according to CME Fed funds futures. Odds of another hike by March remained near 50%, futures implied.

Turning away from the Fed, crude oil remains in the headlines as prices rose to their highest levels since mid-2015. Front-month U.S. futures look like they might test $60 a barrel, in part due to an oil spill in the Midwest and also amid talk that OPEC might extend production cuts when it meets next week. U.S. stockpiles fell by nearly 2 million barrels last week, the government said Wednesday.


Looking ahead to next week, the data calendar gets a lot more crowded. New home sales for October kick things off Monday, followed by the government’s second estimate for Q3 gross domestic product (GDP) on Wednesday. On Thursday, investors will get a look at Personal Consumption Expenditure (PCE) prices for October — a data point the Fed watches closely for any signs of growing inflation. Auto and truck sales, as well as construction spending, round things out next Friday.

Although next Friday is the first Friday of the month of December, the monthly payrolls report won’t come out that day. It’s due a week later, as the government doesn’t release that report on the first day of a new month.


Today’s session ends at 1 p.m. ET, so investors might want to be prudent trading what could be a thin and potentially volatile market (see below). 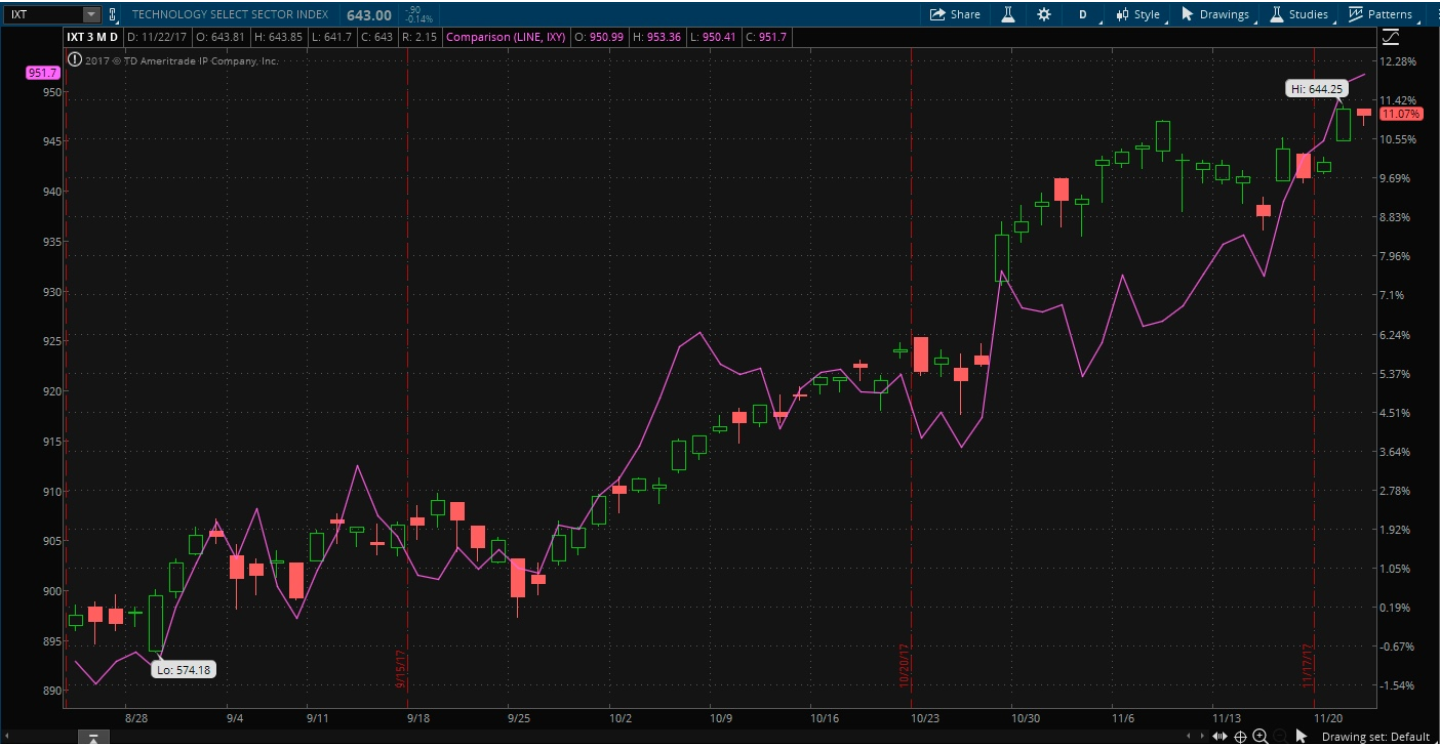 As Black Friday dawns, the info tech sector (candlestick chart) continues to charge higher, but consumer discretionary stocks (purple line) are another sector showing renewed strength over the past few weeks. Data sources: Standard & Poor’s. Chart source: The thinkorswim® platform from TD Ameritrade. For illustrative purposes only. Past performance does not guarantee future results.
Holiday Clash of the Dot Coms: Wal-Mart’s earnings last quarter showed a 50% year-over-year gain in online sales, potentially positioning the company to better compete with Amazon as the two titans fight for Black Friday shoppers. One challenge for WMT could be attracting people to the site for holiday shopping when the store is arguably best known for groceries and household items. However, the Chicago Tribune notes that WMT’s purchase of consumer products seller Jet.com last year better aligns WMT with more trend-setting companies like Bonobos, Modcloth and Moosejaw, all of which are sold via Jet.com.


That said, AMZN is already trying to counter WMT and other competitors with pre-holiday sales, and pulled in 38% of all online holiday dollars last year. So perhaps the question is how much headway WMT and other firms like Target can make against AMZN both today and in the shopping weeks ahead. Early Black Friday results might soon give us a sense of how the first round played out in the coming days.

Jobs Warning: Every time the government reports payrolls data, it’s important to check on the types of jobs created. While there’s nothing wrong with working at a restaurant or tending bar, it’s good to see new jobs in industries like construction and manufacturing that likely pay more and perhaps provide broader career opportunities. Unfortunately, a recent report from the Bureau of Labor Statistics points in a negative direction from a pay perspective, projecting that the two fastest-growing jobs over the next 10 years will be home health and personal care aides. While they fill an important role and are very respectable work, these jobs pay on average only about $22,000 a year, not much more than minimum wage. These two roles will provide 1.2 million new positions over the next decade, more than in the next eight rapidly growing fields combined.


On the positive side, the government expects overall U.S. employment to increase by 11.5 million between 2016 and 2026, representing slightly higher growth than in the previous decade. Also, one of the careers expected to see big gains is software development, where the average salary is more than $100,000. One more takeaway: Jobs for statisticians are projected to grow 12.4% over the next 10 years, so it’s probably fair to say we won’t be lacking for government reports like this one.

Turn Out the Lights: The day sandwiched between Thanksgiving and the weekend was the lowest trading day from a volume perspective last year on the New York Stock Exchange (NYSE), This might be in part because it’s a shorter session than normal but also because so many people tend to take the day off. The previous year, it came in as the second lightest trading day, only ahead of Christmas Eve. So whatever you do today, tread carefully. Thin markets sometimes swing more dramatically, and just because it’s the day after a holiday and a shortened session doesn’t mean outside events won’t have any impact. Geopolitics doesn’t often take a holiday, so consider the possibility of any external news events that might pop up and move the markets.