The carnage in the broader market continued as both small and midcap indices underperformed benchmark indices for the week that ended on February 15.

“Market slid due to a broad-based selling across sectors as rising yields and a weak rupee cast clouds over investor’s sentiment. Volatility may continue due to a lack of positive triggers in the domestic market, while rising oil prices will impact domestic macros in the near term,” Vinod Nair, Head of Research, Geojit Financial Services, told Moneycontrol.

“Global markets turned negative due to obstacles in the US-China trade deal,” he said. 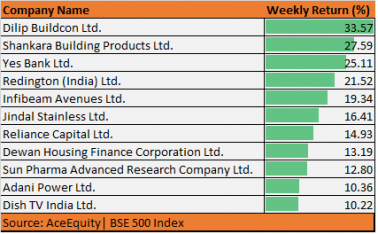 (Note: The above list is for reference and not buy or sell recommendations)

The S&P BSE Small-cap index plunged by about three percent in five trading sessions and the only handful of stocks gave double-digit returns compared to stock which saw a similar cut in the same period.

In terms of losers, as many as 78 stocks in the index fell by 10-25 percent in the same period which includes names like Punj Lloyd, Nandan Denim, Mirza International, ABG Shipyard, Graphite India, IIFL Holdings, Natco Pharma, Repco Home Finance etc. among others. 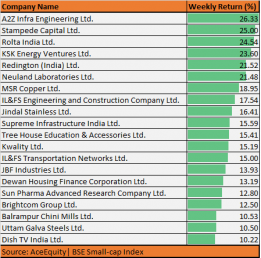 (Note: The above list is for reference and not buy or sell recommendations)

The Nifty formed a bearish candle on the weekly charts and a Hammer-like candle on the daily charts on February 14, which indicates that the immediate trend is in pressure, but some bounce could be seen at lower zones, suggest experts.

India VIX moved up by 5.72 percent at 16.46 levels in the last week while Put Call Ratio fell down from 1.59 to 1.30 levels, the spurt in VIX with a decline in PCR OI suggests that supply pressure is intact in the market at every important resistance zones.

“The index is now near to the major support zones and lower part of the range which could decide the next leg of the rally, so either here a small bounce or else the next leg of fresh break down,” Chandan Taparia, Associate Vice President, Analyst-Derivatives, Motilal Oswal Financial Services told Moneycontrol.

“The Nifty index remained under pressure for all the five trading sessions of the week, and closed with the losses of two percent by drifting towards the lower band of the recent trading range. Put writing is seen at 10300 followed by 10500 strikes, while Call writing is seen at 10700 then 10800 strikes. Option band signifies a lower shift in the trading range in between 10600 to 10900 zones,” he said.