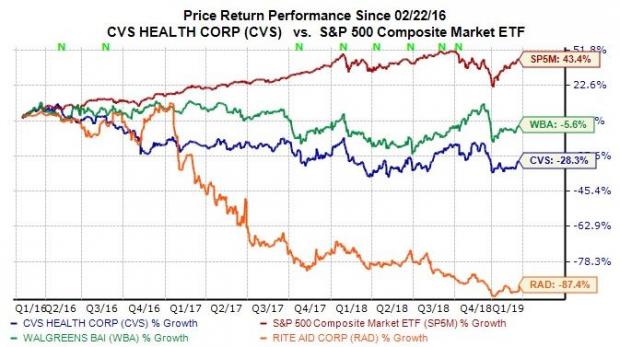 “Our pro-forma Adjusted EBITDA from continuing operations for the third quarter of $153 million, which includes $24 million in fees that would have been received if all of the divested stores were being managed under the TSA Agreement as of the beginning of the period, was in line with our expectations.”

“The third quarter was a busy time for our team in preparing for and beginning the transfer of stores and related assets to Walgreens Boots Alliance. I would like to thank our entire Rite Aid team for their dedication and efforts in accomplishing this important business initiative for our company and our shareholders. To date, we have transferred 357 stores and have received approximately $715 million in proceeds, which we have used to pay down debt. Looking forward, in addition to completing the transfer process, we will continue to focus on our most significant business-building opportunities as we work together to deliver a great experience to our customers and patients.”

As previously announced on November 27, 2017, the company completed the pilot closing and first subsequent closing under the amended and restated asset purchase agreement with Walgreens Boots Alliance, Inc. (Nasdaq: WBA), resulting in the transfer of 97 Rite Aid stores and related assets to WBA during the third quarter. Under the amended and restated agreement, WBA will purchase a total of 1,932 stores, three distribution centers and related inventory from Rite Aid for an all-cash purchase price of $4.375 billion. Rite Aid and WBA expect to continue to transfer ownership of the stores in phases over the coming months. Since the majority of the closing conditions have been satisfied, and the subsequent transfers of Rite Aid stores and related assets remain subject to minimal customary closing conditions applicable only to the stores being transferred in those phases, the company classified the assets and liabilities to be sold to WBA-1,932 stores and three distribution centers- as held for sale and the corresponding operating results and cash flows of those stores as discontinued operations in its financial statements in accordance with GAAP.

A technical chart for Rite Aid Corporation shows shares falling until November when they reversed into an uptrend:

The most recent CVS earnings report has CVS stock falling on Wednesday with a poor outlook for 2019.

Good morning and welcome to the Prospect Capita