On September 5, 2017, it was announced that RhythmOne (OTCPK:BLNKF) will acquire YuMe Inc. (NYSE:YUME) for $185 million. YUME shareholders will receive $1.70 per share and 0.7325 shares in RhythymOne stock. The cash portion of the deal is $59.41 million, but the stock portion has since fallen to $82.11 million which brings the total down to $141.52 million. The combined entity will have a market cap of $242.25 million based on todays closing price of $3.23. This is low compared to what can be justified by the asset base and earning potential of the company.

The implied synergy is $23.24 million as shown below:


Even if YUMEs revenue continues to lag, the combined company will be well-positioned going forward. Theres an indication that the 5% annual revenue decline will not continue as the 9 months ended Sept. 30, 2017 has only seen revenue decline 0.48%. For the purposes of the model, the growth rate is assumed to be -3% annually for 2018 and 2019. 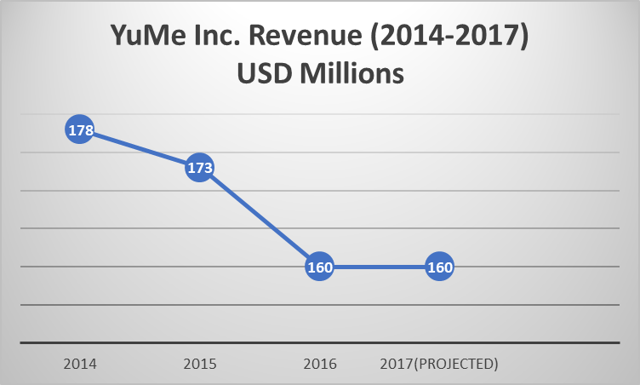 RhythmOnes revenue has grown at a rate of 6% annually over the past 3 years. Acquisitions have accounted for most of this growth. Once YUME is fully incorporated, it looks like revenues will grow at a slower rate as both companies have struggled to achieve organic revenue growth in recent years. 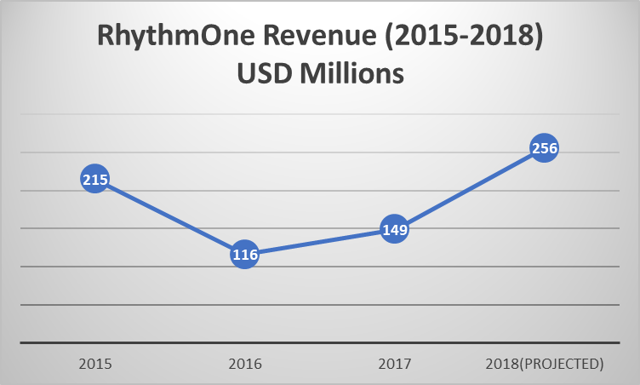 The implications for the combined company could still be high yields for investors. Revenue is projected to increase steadily from $415 million in 2018 to $432 million in 2020. Assuming cost synergies of $10 million per year, Net Income could potentially be $34 million in 2018. This is a huge improvement from last years ($7.7 million) for YUME and ($19 million) for RhythmOne. 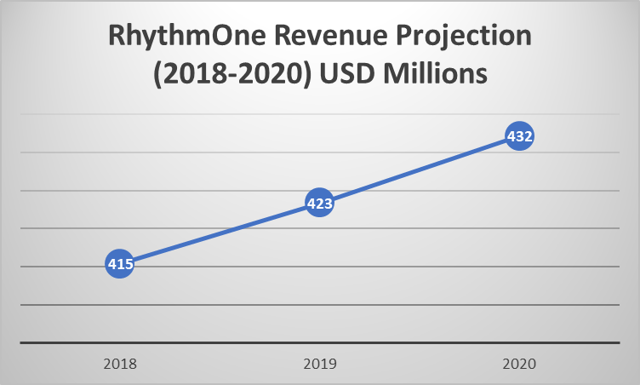 RhythmOne is projected to be profitable for the first time since 2014 due to their strong performance through the first 3 quarters of 2018. Acquisitions have had a lot to do with their recent success, but the implication is that the scale of the operations of the combined entity will allow for more natural growth.

YUME is also expected to return to profitability for 2017 as outlined below:

The implications for the combined company are strong revenue and earnings performance for the foreseeable future. YuMes innovation in video advertising coupled with RTHMs programmatic platform should offer a unique advertising experience for clients. The lack of organic growth is of concern, and is modeled in and hence the lower income in 2020. There is potential that the combined entity will be able to achieve more organic growth through their more complete product offering; however, this possibility has to be weighed against the possibility that scale will not contribute to growth as much as hoped. No growth in revenues due to scale is accounted for in the model, but there is 2% annual revenue growth for the combined entity from 2018-2020.

The combined entity is also expected to produce more free cash flow as detailed below:

The growth in free cash flows is driven by the cost synergies as well as each companys improved operating performance seen thus far in 2017. The change from negative to positive net income combined with relatively stable capital expenditures explains the drastic improvement heading into 2018. The situation is expected to improve for 2019 with a potential drawback to 2020 due to the lack of revenue growth.

In terms of valuation, it looks like RhythmOne is currently undervalued. With $34 million in Net Income and $31 million in free cash flows projected for next year, the current market price only represents multiples of 7.13x and 7.81x, respectively. Even a 15x multiple would mean an increase in the stock price from $3.23 to $6.80.

The potential for 111% return on investment does not come without inherent risks. It is not yet totally clear if the merger will be successful and if the cost synergies will work as claimed. It is also not clear if the strengths of the two companies will combine seamlessly and offer a truly unique experience as is currently claimed by Chairman Raj Chellaraj. The potential downside is a failed merger and two potential takeover candidates. The potential upside is a company dominant in the growing programmatic advertising space. Its a risk worth taking for investors who are accustomed to higher beta offerings. I would rate the stock a Strong Buy.


Disclosure: I/we have no positions in any stocks mentioned, and no plans to initiate any positions within the next 72 hours.