This July, software grandee John McAfee donned the fools cap and brought down roars of laughter upon his head

His forecast was rooted in the lunatic assumption that bitcoin would close 2017 at $5,000.

And McAfees $5,000 bitcoin is miles off course.

That deficits dont matter, for example that todays stock prices are justified by fundamentals that the true unemployment rate is 4.1%.

Or that Janet Yellen is fun at parties.

Why is $1 million bitcoin any less plausible?

Here madman McAfee rises in defense of his claims:

And here he fits himself for the straitjacket: 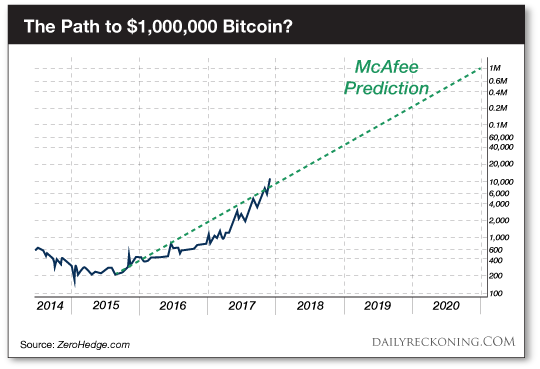 McAfee is so confident in his $1 million forecast hes placed what we can only call a high-stakes wager upon it.

To repeat it in these pages would run afoul of our strict Presbyterian standard.

Let us simply state that hes putting his manhood on the line.

But could McAfee be right?

Could $1 million bitcoin be three years off?

Why cant it rise another 30 times in three years? Or more?

Each time its stormed from its death bed with defiant yells and obscene gestures for the mortician.

Why should this time be different?

But, comes your objection:

The price increases increase at an increasing rate as bitcoin use increases.

$1 million bitcoin may stagger your sensibilities if you do not own bitcoin today, that is.

But James Altucher is a former hedge fund manager who knows the color and the business of money.

And James agrees with McAfee that $1 million bitcoin by 2020 is possible:

Easily did you catch that?

How does bitcoin travel the impossible path from $10,000 to $1 million, James?

There are 15 million millionaires around the world. All their financial advisers are going to say, Hey, buy a bitcoin. You need some exposure.

The cryptocurrency market remains exceedingly slim despite the screaming headlines.

As ARS Technica confirms, Few people own any bitcoins at all.

If bitcoin finally seduces mainstream finance, the royal road to $1 million may open as the money floods in.

But put $1 million bitcoin to one side for the moment.

James believes the cryptocurrency market overall will be worth a cosmic $200 trillion one day.

Perhaps at this point you wonder whos sunk deeper in madness James Altucher or John McAfee.

But James builds his case on solid rock:

So that $200 billion will eventually rise to the level of currencies. And probably sooner than we can imagine.

If James is half right no 10% right then owning the right cryptocurrencies today is a passport to Elite Street.

Were on the ground floor of an enormous trend thats going to change the world, declares James.

(James has agreed to host a special, free live event Monday evening to show you the possibilities and answer any questions you might have about cryptocurrencies.Click here to learn more).

We admit… We havent the dimmest notion where bitcoin will trade in three years time.

Neither $1 million nor zero would drop our jaw.