BB&T’s $28 billion deal last month to buy SunTrust is the largest U.S. bank tie-up since the financial crisis and one that many expect will trigger even more consolidation in the industry.

While Democrats continue to criticize big banks as an unchecked risk to the economy, regulatory pressure has eased up amid Trump-era rollbacks. That’s left four giant banks — J.P. Morgan Chase, Bank of America, Citigroup and Wells Fargo — with a huge slice of the market and forced regional banks to team up with each other to compete.

They are all scrambling for consumer deposits and lending customers, but the largest have a seemingly insurmountable advantage of size. J.P. Morgan has a $11 billion annual technology budget and a plan to expand that will put it in reach of more than 90 percent of Americans by the end of 2022. That has left smaller banks nervous to spend ever-increasing amounts of money on technology, the blueprint for modern banking success.

But the widely expected new round of bank mergers may differ from the blockbuster deals of the 1990s in one key way: Buyers aren’t going to pay over-the-top sums for their targets. The latest deals have already distinguished themselves with more modest terms. And Wall Street likes what it sees.

“Investors are [now] more focused on deal terms, mechanics and outcome than they’ve ever been before,” said Thomas Michaud, the CEO of Keefe, Bruyette & Woods, an investment bank that specializes in the financial industry. “In some cases they feel like they might have been burned by deals where – that just didn’t pan out as expected. So they’re demanding more from the bank consolidation.”

No premium? No problem

BB&T is only paying SunTrust shareholders about 7 percent more for their shares than what the market thought the firm was worth on Feb. 6, a day before the merger was announced.

In the deal world, this is called a premium. And in order to appreciate how strange such a low premium is, one needs only look back a few years.

The 1990s ushered an era of glitzy bank deals that came with hefty prices, a trademark of Sandy Weill, the swashbuckling executive who helped build Citi into a global giant.

Weill’s Travelers Group stunned Wall Street in 1997 when it announced that it would purchase Salomon Brothers for more than $9 billion, almost twice book value. One year later, Travelers merged with Citicorp in a landmark, $70 billion all-stock merger that created a $140 billion firm with assets of almost $700 billion.

Bank tie-ups continued into the early 2000s leading up to and during the financial crisis, but they morphed from deals aimed at cost cutting or geographical expansion into mergers of necessity as the troubled sector scrambled to pool resources and shore up distressed balance sheets. Since then, Wall Street has both seen both fewer bank mergers as well as smaller price tags.

Median bank merger premiums in the United States have steadily declined from 47 percent in 2010 to 23 percent in 2018, according to FactSet data. There were 119 deals in 2017, the most active bank M&A year since the crisis. That compares to 160 deals in 2006, before the crisis began.

While investors have cited crisis-era regulations for fewer bank deals in recent years, the restrictions in the Dodd-Frank rules do not fully explain the decline in deal price tags. If anything, deregulation since President Donald Trump took office was supposed to reverse that trend. GOP Sen. Mike Crapo’s 2018 Economic Growth, Regulatory Relief and Consumer Protection Act, for example, is heralded as a green light for merger hopefuls.

This year is already more active than 2018 in terms of aggregate deal value. There were 261 bank transactions last year that summed to a total value of $29.9 billion, according to S&P Global Market Intelligence data compiled by Moelis & Co. Less than three months into 2019, investors have already seen 48 transactions for a total value of $35 billion.

Mergers between smaller banks are not “necessarily bad because they’ll say: ‘For us to stand up to [banks like J.P. Morgan], what we need to do is create a $50 billion or a $70 billion bank that can then withstand that,” Michaud told CNBC during an interview earlier this month at KBW’s Manhattan headquarters. Stifel-owned KBW has handled 65 percent of all bank M&A since 2017.

SunTrust’s offer to exchange stock for stock, putting pressure on itself to deliver a winning deal. “Management teams want to go to their board and say they got the best price for the bank,” said Trevor Montano, a managing director at Moelis. “However, in stock-for-stock transactions, post announcement buyer stock performance and longer-term value creation of the combined franchise must be considered.”

BB&T had a better reception. BB&T’s stock rose 4 percent the day of the merger announcement, and SunTrust shares jumped 10 percent.

“Paying a lower premium, there’s less immediate pressure to pursue a slash-and-burn approach that alienates different parts of the firms and creates less pressure on the back end,” said Wells Fargo Securities analyst Mike Mayo. “There seems to be a smart structure that can create long-term value without as much front-end risk.”

The thought of an age without frothy deal premiums may be enough disappoint some investors, but for another group of bank shareholders, the key to banking success is locked in the war for deposits, reliable customers and technology. Mergers often represent an attractive way for a pair of smaller banks to improve in those respects and take market share from the Street’s biggest firms

Changing customer demands instigated the “tremendous increase in the need for technological investment,” according to BB&T’s CEO Kelly King. “Our clients now demand what I call real-time satisfaction — they want what they want, when they want it.” 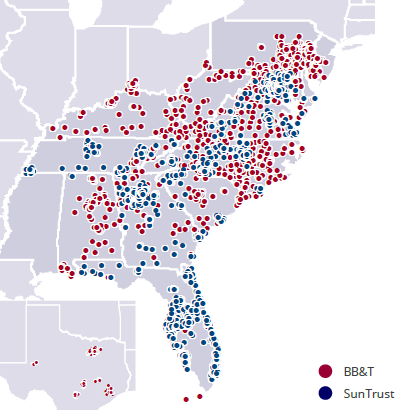 While both banks were doing OK as is, King said going forward they needed to join forces to match the technological investments of the biggest U.S. banks.

Goldman Sachs’s CEO David Solomon said last spring that it had hired about 9,000 engineers to help ensure that the bank keeps up with peers. For a company with just over 36,000 employees, the bank’s influx of computer engineers now represents approximately 25 percent of its entire workforce.

The race for deposits in fast-growing markets is also fueling merger fever. The nation’s nine largest commercial banks have churned out big profits in recent years by concentrating on the largest U.S. cities, populated and full of loan-hungry people and businesses. Those nine institutions control 49.2 percent of total assets. Meanwhile, the 4,074 U.S. banks with $1 billion or less in assets hold 6.6 percent, down from 25 percent in 1994.

And while both BB&T and SunTrust easily surpass that $1 billion threshold, shareholders on both sides of the deal betting on the new company’s ability to capture deposits and loan volume. In other words, its ability to do battle with J.P. Morgan and others.

The growing concentration of assets among the nation’s largest banks — those with at least $250 billion in assets — is on pace to snuff out smaller regional and community banks with far fewer resources.

“The business has been changing and will be changing,” said SunTrust CEO William Rogers on the day the deal was announced. “This gives us the opportunity to be absolutely the most competitive bank.”