American companies are investing in their own stocks at an eye-popping pace.

After buybacks among S&P 500 Index members hit a record in the first quarter and more than a third of the index raised dividend payments, corporations have returned $992 billion to shareholders in the past 12 months. At the current rate, 2018 will mark the first year that corporate America showers investors with more than $1 trillion. 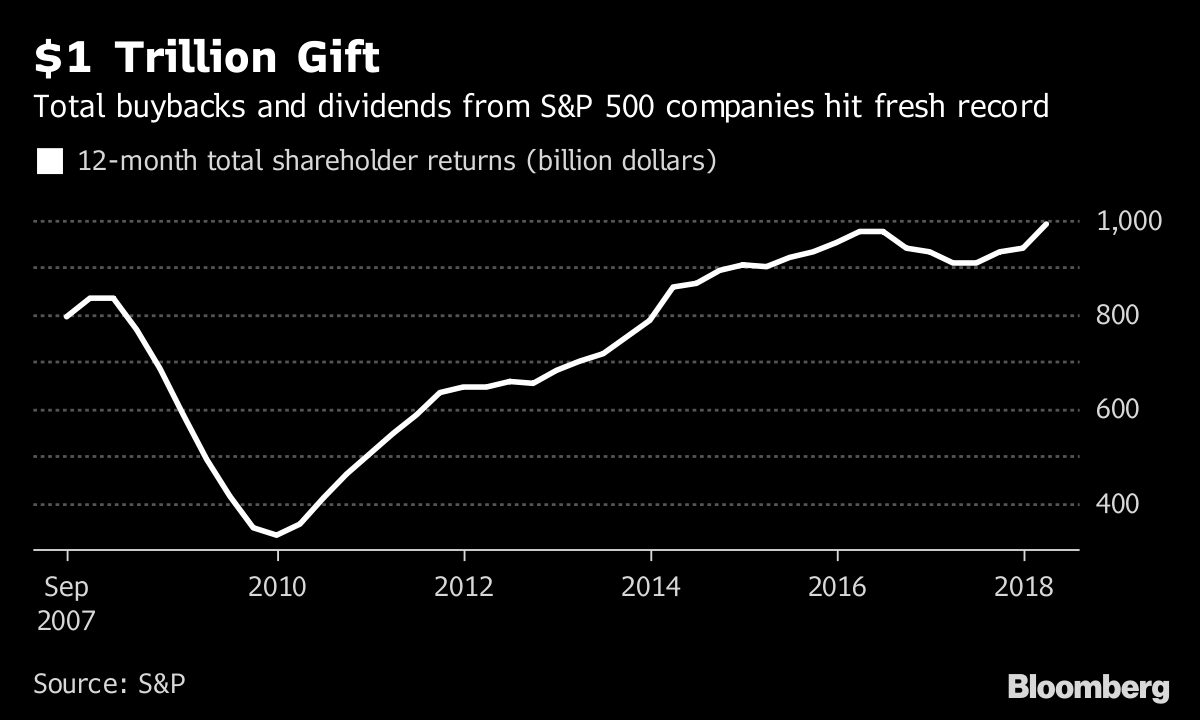 How companies use record levels of cash has become a hot-button issue after the Republican tax overhaul brought hundreds of billions of dollars of relief to corporations. The buyback spree bolsters a bull case for stocks at a time when rising bond yields diminish their attractiveness. The largess has also raised eyebrows among those criticizing chief executives for not spending as much on new plants or equipment, a strategy seen key to longer-term profit growth.

Turns out, companies are so flush they can boost spending on both activities. First-quarter spending on capital expenses jumped 21 percent to $159 billion — a record for any start of the year.

“Cash remains near or at its highs, giving companies the ability to do whatever they want,” Howard Silverblatt, senior index analyst at S&P, said in a note.

The added impulse from corporate buying came as stocks entered the first correction in two years and the S&P 500 notched its worst quarter since 2015.

Below are more details on S&P 500 companies’ cash use in the first quarter:

At $1.6 trillion, cash and cash equivalent stayed near all-time highs Share purchases surged 34 percent to a record $178 billion, surpassing the previous peak of $172 billion reached in 2007 Tech companies accounted for about a third of total buybacks, with repurchases more than doubling from a year earlier; Apple set a record with $22.8 billion Financial firms spent roughly the same as last year, a sign that Fed approved buybacks may have been fulfilled No company cut its dividend for the first time in at least 15 years Among those that raised payouts, the increase averaged 10 percent