QIWI (QIWI) is the leader in the online payments market in Russia. The markets in which the company is present show growth, and this growth could affect QIWI’s profits and dividends and, as a result, return the attractiveness among investors. This article is about why QIWI is an excellent investment right now. 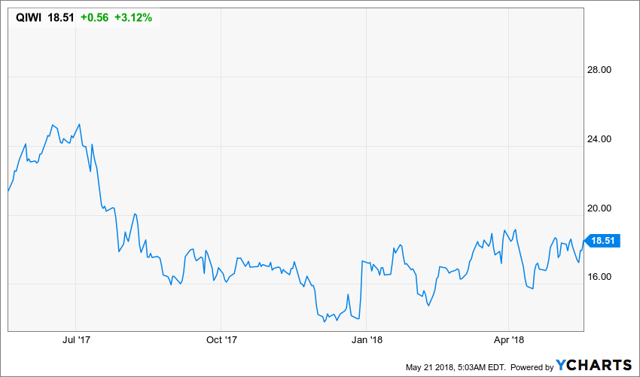 QIWI – online payment service, the analog of PayPal (PYPL). In 2008, the company launched its main project – QIWI Wallet, and, already in 2013, held an IPO on the Nasdaq.

In 2016-2017, QIWI launched the installment card “Sovest” and acquired the banking brands “Tochka” and “Roketbank”, specializing in small and medium-sized businesses. Now, QIWI positions itself as one of the leading FinTech companies in Russia.

The company’s CEO is Sergey Solonin, one of the most active figures in the Russian FinTech. Solonin also holds the post of chairman of the FinTech committee under the government of Russia.

The volume of payments through the QIWI system amounted to more than 900 billion rubles. QIWI service is at least once per month used by more than 50 million people. In 2017, QIWI Wallet active accounts increased by 17% to 20.1 million.

QIWI’s revenue has been growing steadily since the IPO. Net profit also increased along with revenue until 2017. In 2017, the net profit of the company significantly decreased and returned to the level of 2015, which greatly frightened investors.

The main reason for the decline in profits was the investment in the project “Sovest” and the acquisition of two banking brands – “Roketbank” and “Tochka”.

QIWI does not use borrowed funds and even maintains a fairly large cash position. 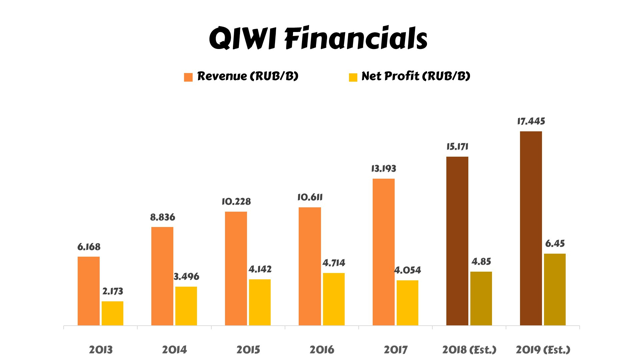 Source: YCharts, picture by the author

The key growth driver for the company will be the very rapid growth of online payments and e-commerce markets in Russia. In Russia, compared to other countries, there is still a low penetration rate of smartphones, as well as a small proportion of transactions in the e-commerce segment.

QIWI as a payment service affects many markets, including the self-employed market and sharing economy. For example, self-employed in Russia mainly uses QIWI as the main platform for most operations related to work activities. QIWI also leads the market in the sharing economy in Russia. Most companies that are part of the sharing economy, including Uber (UBER) and Airbnb (AIRB), use QIWI for money transactions in Russia. Drivers in Uber and landowners in Airbnb receive their income through the QIWI system.

Another driver for the company should be a partnership with bookmakers. This is also a fairly large market in Russia, especially due to the fact that in Russia in 2018 will host the World Cup. In accordance with Russian law, any person who wants to register at a bookmaker should first open QIWI Wallet for identification. 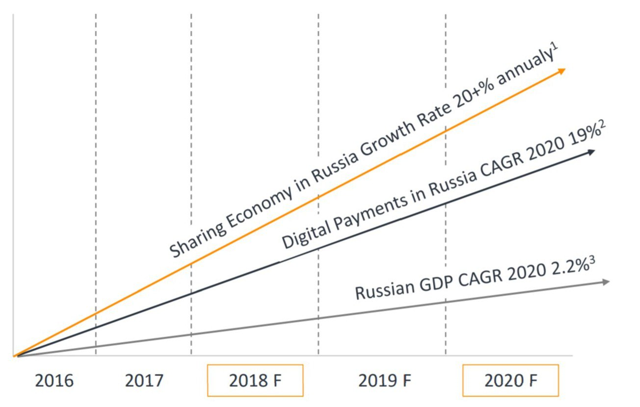 Last year, QIWI launched the project “Sovest” – an installment card. It expects a huge growth rate, as there is practically no competition in this market, and reducing the key interest rate will increase the debt load of Russians, which now remains at an extremely low level. The main risk for the project this year will be the entry of the largest banks into this market, which will slightly squeeze the position of QIWI. But, at the moment, by the number of active clients, the project “Sovest” remains in the first place in Russia.

The “Tochka” brand, which QIWI bought last year, is a multi-bank platform and allows customers to combine several accounts of different banks in one app. That’s why “Tochka” is looking for its clients among small and medium-sized businesses in Russia, for which there is not yet a universal banking solution in the current market.

The interesting news was that, in 2017, the Central Bank of Russia, through the bank “Otkritie”, conducted a purchase of shares of QIWI. One of the reasons for this may be the possible launch of the Russian state cryptocurrency. For more details, I recommend reading this article.

As for the forecasts for the next two years, I assume that revenues will continue to grow at an accelerated pace, as the markets in which QIWI is present will grow by 20% + annually. In the coming years, the company expects revenue growth of at least 15-20% per year. 2018 should be final in terms of high investment for new projects, and, in 2019, I expect the return of marginality to the levels of 2015-2016, which will allow it to receive more than 6 billion rubles of net profit.

Currently, the company is strongly undervalued against its historical multiples and competitors. The P/E multiplier with the earnings for 2017 is below the average P/E for 5 years by 19%. Competitors of QIWI, operating in the market of online payments in the face of Square (SQ) and PayPal, are traded with forward P/E multipliers more than 100x and 30x, respectively, whereas forward P/E for QIWI is only 11x.

In conclusion, I want to say that the decrease in net profit was temporary and is connected with investments in very ambitious projects that will allow the company to grow by double-digit growth rates and starting from 2019 to return to dividend payments. Let me remind you that, in recent years, QIWI paid good dividends to its shareholders with an average yield of 4-5%. That’s why I think QIWI is an excellent investment at current prices.