Burning coal used to be the primary way power companies generated the electricity needed to cool homes, run factories and brighten streets. But US electricity production is changing dramatically, as companies rely more on natural gas and renewable energy sources.

The $30 billion firm, which employs some 20,000 employees, once used coal to generate electricity. But now it delivers some of the nation’s cleanest power using natural gas and renewable energy sources, such as wind, solar and geothermal energy. Nearly 70% of PG&E’s electricity comes from sources that are greenhouse-gas free.

In recent years, natural gas has surpassed coal as the leading source of electricity in the US. In 2017, natural gas accounted for nearly 32% of US power generation, up from about 22% a decade earlier, according to federal data. Coal, meanwhile, now accounts for 30%, after falling from 49% over the same time period.

Despite President Trump’s promises that he would bring back coal jobs, the industry saw a net gain of only 400 jobs during his first year in office.

California still uses some coal to produce electricity, but barely any. The state’s move away from coal is driven by its aggressive environmental goals.

PG&E, the parent company of Pacific Gas and Electric which serves some 16 million customers in the state, aims to boost the amount of power it gets from renewable sources like wind and solar energy from 33% to 50% by 2030, says Williams. 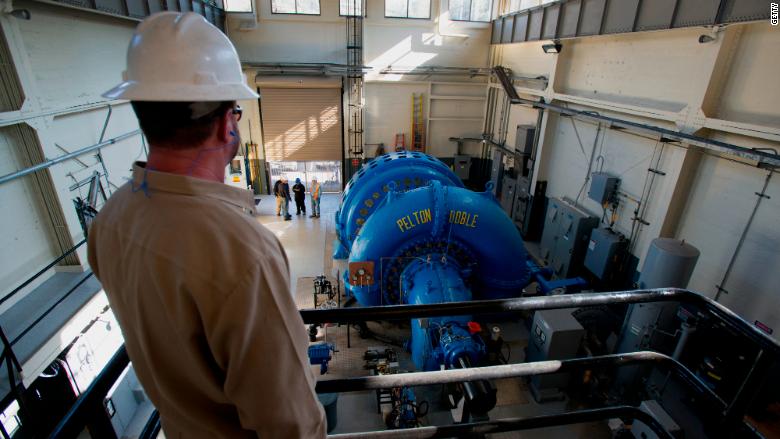 One of PG&E’s power plants.

Williams acknowledges that a large percentage of President Trump’s base comes from coal country and voted for him because he promised to revive America’s coal industry.

She said California’s success with renewable energy can show them a different way. While not every state has the same wealth of natural resources, she believes California can serve as a model of how it can be done.

“I really believe it can be an example to the rest of the country in how to do this properly,” Williams tells Harlow. “Our reliability has never been better. Our customer bills are 20% to 30% lower than the national average. Our system is safe, we’ve created jobs, our economy is booming.”

She says it’s up to the states to push for new plants fueled by renewable energy.

“When states are ready to go to higher levels of renewables, the market’s going to be there, the costs are going to be more competitive, and it’s going be more reliable,” Williams said.