Mexican airport holding company Grupo Aeroportuario del Pacifico (NYSE:PAC) achieved a rare quarter in which its typical brisk top-line growth accelerated beyond the rate of service costs, leading to a double-digit rise in operating profit. After looking at the quarter’s numbers from 30,000 feet, we’ll reduce cruising altitude to examine salient details from the report that GAP (as the company refers to itself) issued on Thursday. Note that in the discussion that follows, all comparative numbers are presented against the prior-year quarter (the fourth quarter of 2017). 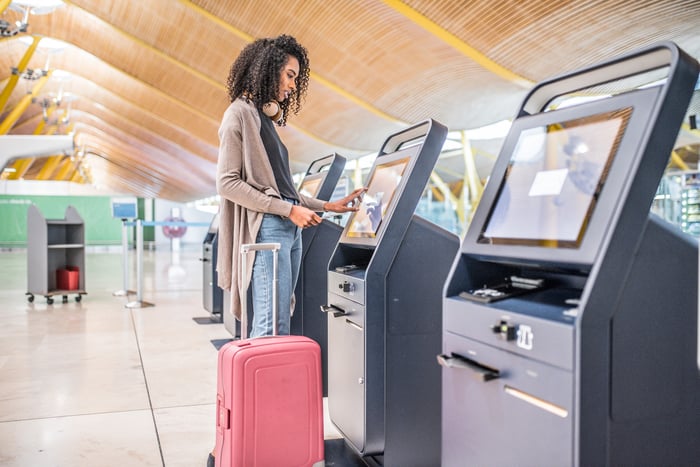 What happened with GAP this quarter?

GAP’s aeronautical revenue, which derives mostly from passenger fees, improved by 15% on the upswing in customer traffic, coupled with inflation-matching increases in fees charged to passengers.

Revenue from non-aeronautical services jumped 28%. Domestic airport activity drove most of the gains: Management cited a 44.5% increase in visits to VIP lounges, higher advertising and car parking revenue, and improved revenue from businesses operated by third parties. The third-party revenue benefited from the opening of new commercial spaces at Guadalajara and Tijuana airports, which are the company’s largest and fourth-largest airports by revenue, respectively.

Montego Bay airport’s duty-free stores, retail stores, food and beverage outlets, and leased spaces enjoyed higher revenue, and combined with a stronger U.S. dollar to generate an improvement of 14.1% in non-aeronautical revenue during the quarter.

Total revenue grew at a faster pace than costs of services, which led to the double-digit jump in operating income shown in the table above. Costs of services are the direct costs GAP’s airports incur in their daily operations. These expenses — which include employee costs, maintenance, security, utilities, and “other operating expenses” — rose 8.3% in the aggregate over the last three months.

After removing the effect of the concessions adjustment, GAP’s EBITDA margin rose 80 basis points to 68.4%.

As I discussed last quarter, GAP had penciled in a heavy schedule of route additions for its airports in the fourth quarter. The company ended up adding an impressive 18 domestic routes and 17 international routes over the last three months. The majority of these scheduled flights boast two or more frequencies per week.

GAP issued its 2019 earnings guidance on Jan.9 in advance of earnings; each of the following figures is stated within a range of plus or minus 1 percentage point.

GAP is planning for capital expenditures of 2.2 billion pesos in 2019 (about $114 million at current exchange rates). Note that this figure does not include expenditures to take over and improve Kingston Airport in Jamaica, which the company won a concession to operate last year. GAP is still uncertain as to the exact date it will take control of this latest addition to its portfolio. Investors should have more detail on the integration when Grupo Aeroportuario next reports in May.