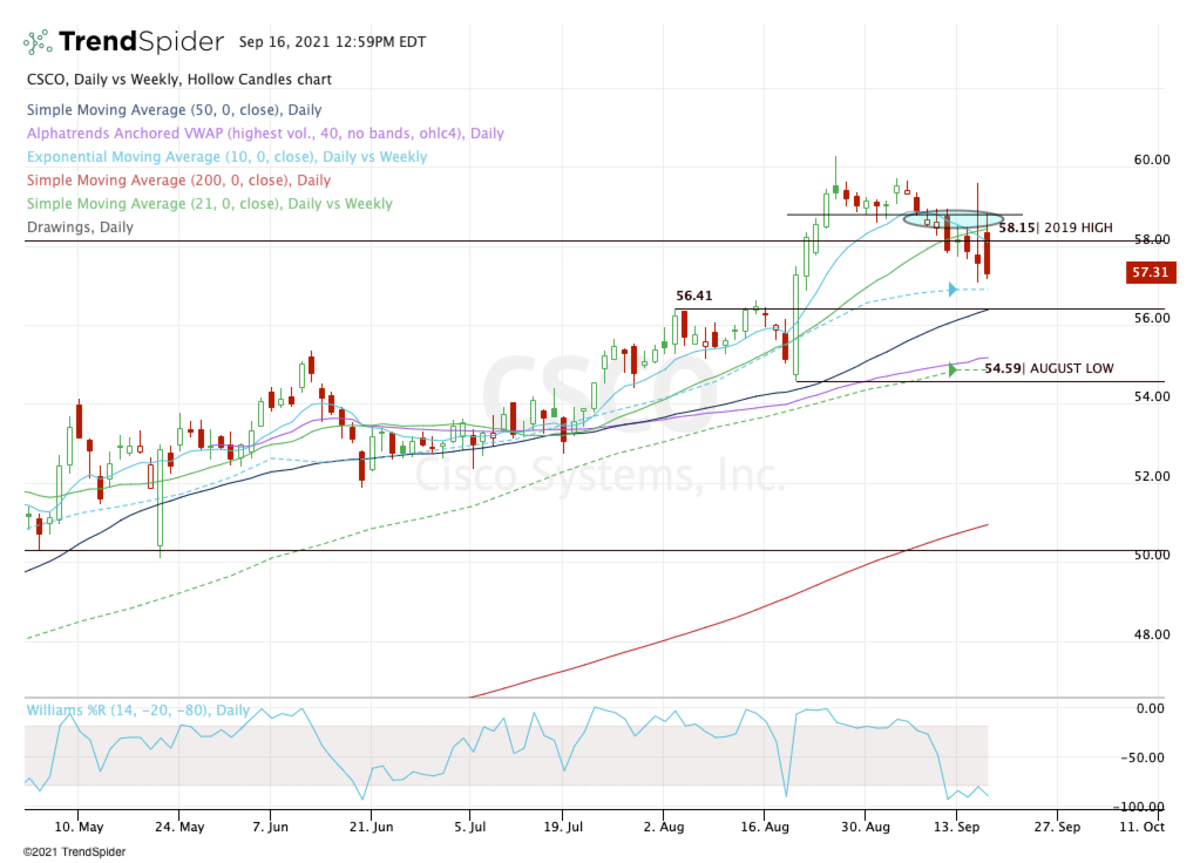 After a strong run, Cisco Systems  (CSCO)  stock has been cooling off lately.

The stock got off to another strong start on Thursday, rallying almost 2% i

Hyperconverged infrastructure providerNutanix Inc (NASDAQ: NTNX)stock is getting a lot of investor love ahead of its fiscal 2018 first-quarter earnings. Such has been the bullish sentiment, that Nutanix is stock is up25% alone in the month of November which has propelled the stock to a 52 week high. A string of analyst rating upgrades and price target hikes in this month have also helped the cause ofSan Jose, California-based hybrid cloud company shares. With NTNXstock at a 1 year high ahead of earnings, the question is, can the stock keep popping higher post earnings? Is plenty more upside left in Nutanix stock from here?

Wall Street expects the Dheeraj Pandey led cloud computing specialist to report a non-GAAP loss per share of 26 cents a share, bettering theloss per share of 37 cents in Q1 2017 by a significant11 cents, near 30% year-over-year (YoY) growth. On the top line front, the analyst consensus is a revenue of $266.9 million, good for a 60%YoY growth. Interestingly, though, the managementrevenue guidance is very conservative, even the high-end revenue estimate also falls below Wall Street consensus. The top management gave a revenue guidance of $240-$250 million and earnings estimate of 37 cents loss per share. With the analyst estimates comparatively much higher, the expectations are very high ahead of earnings and any disappointment could result in the stock giving up some of its massive recent gains.


Nutanix will need more than an earningsbeat to sustain the high valuation.

Nutanix has a strong history of beating analyst estimates in its short public life. The hyperconverged infrastructure provider has delivered a beat on both the top line and bottom line numbers in all the quarters since its IPO. With NTNX stock trading at its highest sales multiple of 7x since going public, an earningsbeat is a must and perhaps would need much more than that to sustain the high valuation. Give the strong earnings history of NTNX stock, an earningsbeat is likely. TheNutanix Q1 earnings whispernumber makes case for much better earnings with aloss per share of just 21 cents, implying 5 cent beat and a massive 16 cents higher than management’s earnings estimates. The guidance again is very vital since the stock is prone to makemassive moves in either directiongoing by the stock price history. In the past post-earnings moves, the guidance played a major role in which direction the stock moved. Analysts expect the company to report a revenue of $282 million for the second quarter.


Key things to watch out for in the earnings release.

Given that the company is still at some distance on the road to profitability, it needs to maintain its strong revenue growth. Once again the company needs to show strong growth in deferred revenue to assure investors about its long-term growth story. The 77% YoY growth indeferred revenue to $526 million in last quarter earnings had outpaced its Q4 revenue growth of 62%. This has also been boosted by the impressive 87% YoY rise in the customer base. The company’s software segment gaining traction has got investors excited since pure software play means higher margins than its core hardware business. Thesoftware only bookings grew by 96% YoY in the fourth quarter forming 17% of the total bookings. The impact of the OEM agreements with IBM (NYSE:IBM) for software and Pure software agreement with Cisco (NASDAQ:CSCO) and Hewlett Packard Enterprises (NYSE:HPE) hardware is also likely to be closely watched. With DRAM prices expected to rise further, the increase in software moat could be very much welcomed by the investors.

The overall market sentiment towards NTNX stock has turned more bullish recently. The short interestdecline in the latest period by further 7.4%, a drop for the consecutive fourth quarter also suggests so. However, the short interest is still very high at 17.5% of the float with days to cover at 6. A strong showing post earnings could result in much higher gains as there is a possibility of a short squeeze. Having said this, investors need to be little cautious as the technical set up is not entirely favorable for Nutanix shares. The NTNX stock technical chart has some bearish signals which could mean the upside from here could be limited. The company shares are in overbought zone as both popular technical indicators Relative Strength Index (RSI) and Bollinger Bands suggest that the stock is heavily overbought. Given the recent run-up in Nutanix shares, and the unfavorable technical set up, the stock will certainly need something more than a beat to continue popping higher.

Looking for fundamentally better tech stocks than Nutanix? Check out Amigobulls’top stock picksfrom the tech sector, which have beaten the NASDAQ by over 166%. Interested in automotive stock? Then, we also have ourtop picks from the auto sector, which have beaten the S&P 500 by 282%. If you’re a trader though, you should check out ourdaily trading ideas sectionfor daily, free updates on the latest crossovers and other popular technical signals.

After a strong run, Cisco Systems  (CSCO)  stock has been cooling off lately.

The stock got off to another strong start on Thursday, rallying almost 2% i

I’ve been bullish on Alphabet Inc (NASDAQ:GOOG, NASDAQ:GOOGL) for some time. One of the biggest reasons is that the company has an assortment of assets that are dominant in their categories. Consider that the main Google property, YouTube, Gmail, Maps, Chrome, Android and Play all have ove