The Fun Of Investing

Every company, sector and business experiences up cycles and down cycles. It is as certain as death and taxes. This fun occurrence with investing suggests that investors consider a level of nimbleness for understanding when to buy and when to sell. Embedded into that concept is an idea that we understand what differences the company made during the down cycles. Less than wise companies just throw out the baby with the bathwater: lay off higher cost valuable employees, sell off valuable assets often at fire sale prices, and ousting plus blaming the older good management for the downturn. We have personally experienced all of this.

During economic downturns, companies have several approaches for gaining improvement including: adding talented employees from distressed companies; purchasing distressed assets (the opposite of selling at distressed prices); jettisoning dead wood; developing new, more efficient technology; repurchasing stock or refinancing debt at lower interest rates often occurring during major downturns. There are many more constructive actions. Understanding how a company changed itself during difficult periods is critical in our view on whether to reinvest when conditions improve.

Noble Drilling And The Last Downturn

The crude oil drilling marketplace tanked when the price of crude oil fell off the cliff in 2014. Crude oil supplied from onshore fracking technology played a key role in over-supplying the market place. Prices fell from the low-100s to the high-70s than crashing into the 20s. With new contracts scarce, while old drilling contracts expired, revenues for all drilling companies plummeted. For Noble Corp., yearly revenue fell from $3.3 billion in FY14/15 to $1.2 billion in FY17. During the same period, average day-rate dropped from $350,000 to $175,000. Utilization collapsed from 85% to 60%. Noble, similar to the rest, faced tough sledding.

Noble found itself in a precarious set of circumstances. Prior to the oil price collapse, the company invested billions into building new and rebuilding older offshore drilling rigs attempting to be a technically superior player in offshore drilling. The collapsed business levels made paying the bills, including debt interest, difficult. With difficult cash circumstances, purchasing stock or distressed assets has pretty much been an impossibility. Instead, the company reformed its debt obligations minimizing early repayment obligations although at slightly higher interest rates.

But Noble is at work improving critical operating areas. In its most recent presentation, Noble displayed a slide showing important improvements. The first is a meaningful improvement in on-time efficiency and the second significant up to a 30% improvement in operational costs. The bottom line is that operating margins on Noble’s return trip will be significantly higher. 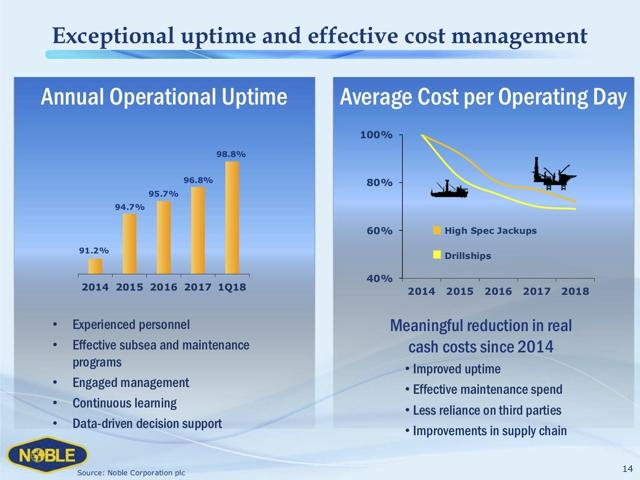 We looked at the effects on margins based on financial information from 2014 to 2017. We purposely left out impairment and depreciation costs from our analysis. In 2014, operating expenses minus the two were $1.68 billion with $3.3 billion in operating revenue. The operating margin is 50%. With a 30% reduction in cash operating costs, the operating margin calculates out as $3.3 billion minus ($1.68 billion times 0.7) divided by $3.3 billion or 60% plus. The cash generated difference is approximately $500M for the same revenue. The table list below illustrates with some fogginess the effects of the lower costs on operating margins and cash generation. Although it is a very difficult task, we tried to include the concept that operating costs are a function of the number of days of drilling plus the type of rig. We did this by using data from the years 2014, 2016, and 2017. Each of these years had different mixes.

General Electric (NYSE:GE) and Noble entered into an agreement to develop and use a software-based solution to add even more cost efficiency to its operation. For the article, “The expected efficiencies captured through the implementation of the Digital Rigsm solution target a 20 percent reduction in repair and maintenance expenditures across the pilot rigs”, we included a slide again from the most recent presentation. 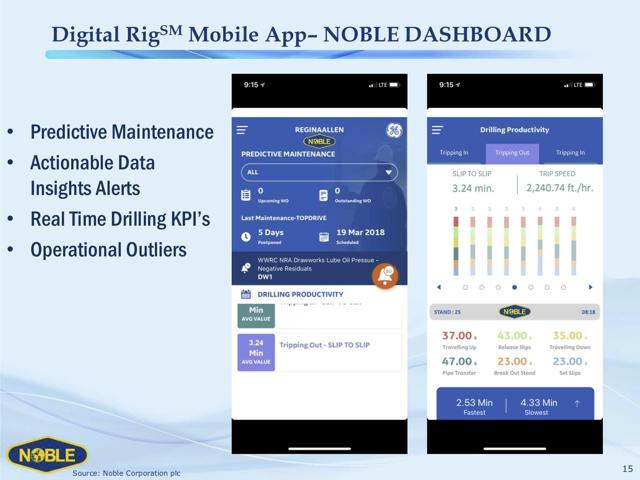 Again, we are not sure exactly what this means in total costs, but it’s still about reducing operational costs. It seems to us that going forward revenue of $1.8-2.0 billion will generate cash flows similar to the $2.2 billion of operating revenue generated in 2016. Continuing, $2.5 billion in operating cash similar to $3.3 billion did in 2014.

We have certainly taken many liberties in our calculations, but it is what we had access to. What we do know is that Noble significantly improved its operating margin during the downtime. We believe that the company now has more flexibility in negotiating contracts and will be less pressured from competition whether onshore or offshore. Noble didn’t stand still. Yes, we would have been thrilled if the company would have had the cash and debt position to repurchase stock during the downturn. It didn’t. The company worked with what it could. But, for us, the value of the return trip for Noble, who managed to gain significant improvement during downturn, could be even more lucrative.

We welcome comments which add clarifications, or pick up methodology errors, or otherwise.

Disclosure: I am/we are long NE.