Finallyafter years of horror stories about the economic impact of the growing number of retirees in the U.S.some good news.

After at least two decades in which more people were entering retirement than into the workforce, the tide is turning. For the next two decades, it will be just the reverse.

In other words, demographics in the U.S. are about to shift from being stiff headwinds to powerful tailwinds for the stock market.

For all this we can thank the millennial generation, which consists of those who were born in the 1980s and 1990s. Though that generation isnt as big as the infamous baby boom generation that preceded them, it is still big enough to represent a powerful economic force.

To be sure, Im focusing on the economy as a whole, which doesnt mean that every individuals retirement prospects are brightening. In fact, as has been often noted in recent years, many have not saved and invested enough. A stronger long-term uptrend in the stock market is unable to bail out a retiree in that position.


But the upcoming shift in demographic trend is good news for those who have heavily invested their retirement portfolios in the stock market.

How good? For an answer I turn to a demographic indicator that researchers have found to be impressively correlated with the stock market: The ratio of the middle-aged population to those who are in the younger-aged cohortknown as the MY ratio. According to a number of academic studies, the stock market tends to perform better when the MY ratio is rising than when it is declining.

Notice from the accompanying chart that the MY ratio bottomed in 2016 and will be trending upward for two decades. 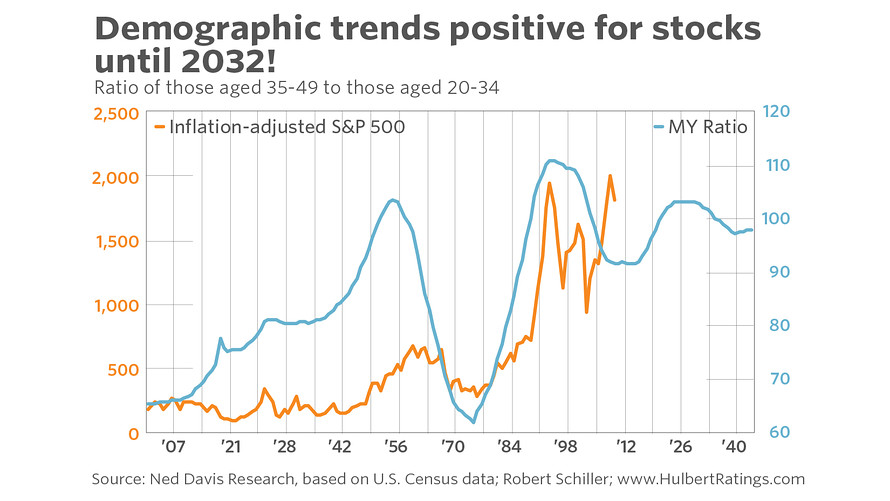 The chart also shows the MY ratio back to 1900 against the inflation-adjusted S&P 500
SPX, +0.70%
. Alejandra Grindal, Senior International Economist for Ned Davis Research, writes that the MY ratio has had a pretty good track record in the U.S., helping define the beginning and end of some secular bull and bear equity markets. The stock markets 1981 low and the 2000 high are some of the MY ratios most spectacular successes.


To quantify the MY ratios track record, Grindal measured the correlation between the MY ratio and the inflation-adjusted Dow Jones Industrial Average
DJIA, +0.88%
She found a correlation coefficient of 0.71, which is impressively high. This coefficient would be 1.0 if the charts two data series were completely correlated, and 0 if there was no correlation whatsoever.


Read: This is how your finances should look in your 30s

The MY ratio isnt a perfect stock market forecaster, and the period since 2000 is a case in point. After all, since the ratio has steadily declined since then, the stock market should be a lot lower today than then.

But Grindal, in an interview, argued that we shouldnt be too quick to declare the MY ratio a failure. Without the Feds extraordinary policy of quantitative easing over the last decade, for example, its not unlikely that the stock market would be a lot lower today. In any case, the years since 2000 have included two of the worst bear markets in U.S. history.


Furthermore, its worth adding, even with the Feds boost the stock market this century has been a well-below-average performer. Consider the inflation-adjusted return of various stock market averages from their early-2000 highs to the end of 2016, which is when the MY ratio hit bottom: The S&P 500 produced just a 0.1% annualized real return over that period, while the Nasdaq
COMP, +0.83%
produced an annualized 0.7% loss. The two-century average inflation-adjusted return for equities, according to the Wharton Schools Jeremy Siegel, is between 6% and 7% annualized.


Note carefully that even if the MY ratios forecast turns out to be right, it applies to the longer-term: The stock market should be materially higher in 10 to 15 years time. The ratio doesnt have any ability to predict the stock markets shorter-term gyrations. So it would not be inconsistent with its forecast of a much higher stock market in the 2030s for equities to suffer a number of cyclical bear markets along the way.

Still, as Grindal points out, demographics are one of the few indicators one can accurately forecast in the long-term. And, for the first time in many years, the bulls can stop being in denial about demographic indicators and start trumpeting their message.

For more information, including descriptions of the Hulbert Sentiment Indices, go to The Hulbert Financial Digest or email mark@hulbertratings.com.