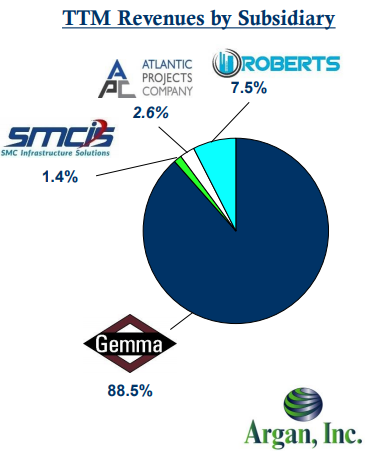 On almost all valuation metrics, Argan, Inc. (AGX) looks to be obscenely cheap. Furthermore, when looking in the rear-view mirror, it looks to be a decently high-quality company for the industries it operates in. When presented with such an opportunity, investors should pause and ask why the mar

On Thursday, the industrial sector proved to be a source of strength for the market. Leading the sector was strength from Envirostar Inc (NYSE: EVI) and NCI Building Systems Inc (NYSE: NCS).

SAGE Therapeutics Inc (NASDAQ: SAGE) shares shot up 73 percent to $159.39 after the company disclosed that Phase 2 trial of SAGE-217 met its primary endpoint.

Shares of Entellus Medical Inc (NASDAQ: ENTL) got a boost, shooting up 49 percent to $23.82. Stryker Corporation (NYSE: SYK) announced plans to acquire Entellus Medical for $24 per share in cash.

Digital Power Corporation (NYSE: DPW) shares were also up, gaining 39 percent to $3.82 after the firm raised 2018 revenue guidance 50 percent from $25 million to between $36 million and $38 million. The change is justified by a swell in orders at Digital Power’s defense and commercial units, including a major Microphase Corporation order from the U.S. Air Force.

Shares of Duluth Holdings Inc (NASDAQ: DLTH) were down 16 percent to $16.20 after the company posted downbeat Q3 results.

Data on consumer credit for November will be released at 3:00 p.m. ET,

Data on money supply for the recent week will be released at 4:30 p.m. ET.