Micron (MU) has an attractive PE ratio which a lot of investors are interested in. At 6.55, its quite low compared to others in the industry. However, in my article I would like to focus on something I think is really important for a manufacturing company with a high CAPEX like Micron and that is free cash flow per share and then where that cash is mostly coming from.

First, I want to examine their revenue growth and so I have collected Microns total revenue for the last 10 complete quarters. As you can see in the chart below revenue has been steadily increasing since Q3 2016 from 2.89 billion dollars, up to 7.35 billion dollars in Q2 2018. 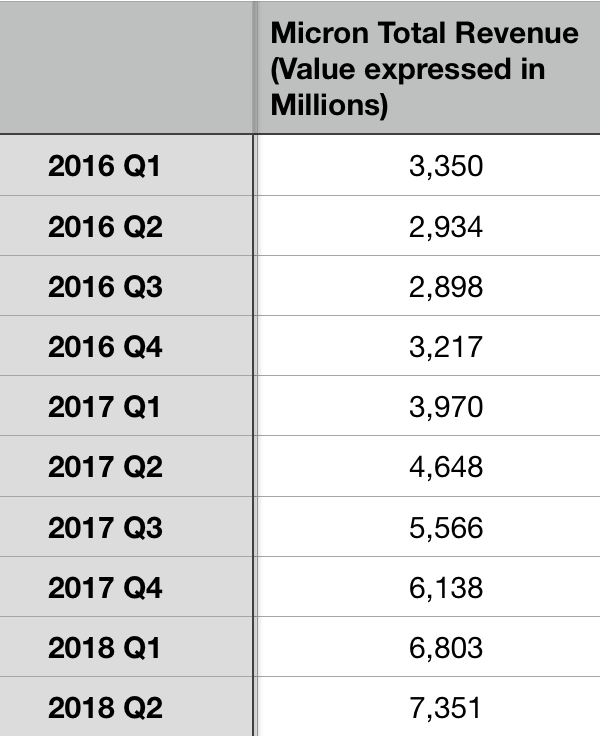 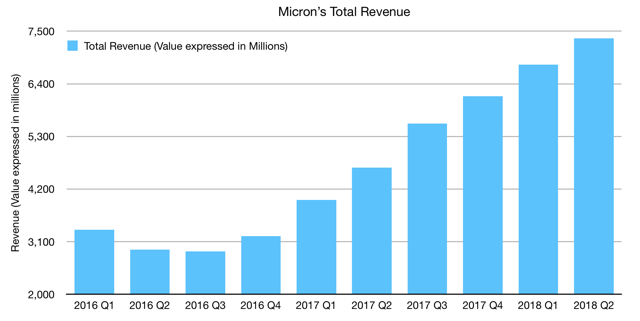 Microns President and CEO Sanjay Mehrotra believes that his company is in a good position to address the growing opportunities for memory and storage.

Micron executed exceptionally well in the second quarter, delivering record results and strong free cash flow driven by broad-based demand for our memory and storage solutions. Our performance was accentuated by an ongoing shift to high-value solutions as we grew sales to our cloud, mobile and automotive customers and set new records for SSDs and graphics memory,

Secular technology trends are driving robust demand for memory and storage, and Micron is well-positioned to address these growing opportunities.

Microns positive free cash flow, and steadily increasing revenue can be attributed to their server DRAM sales success. We can see the product mix per DRAM segment up until the end of FY 2017, but unfortunately MU stopped reporting this way and so we cant see the same for 2018. 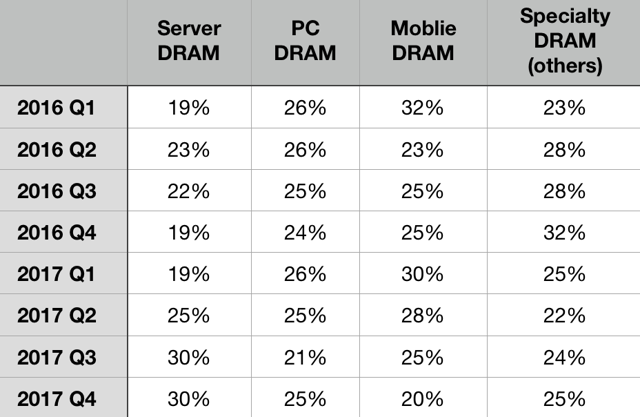 Their mix in PC DRAM has stayed the same since Q1 2016 at about 25%. Their specialty DRAM mix percentage has had slight fluctuations but has mostly stayed the same around 25%. Micron has lessened their mobile DRAM mix which was above 30% in Q1 2016 and is now down to 20% in Q4 2017. 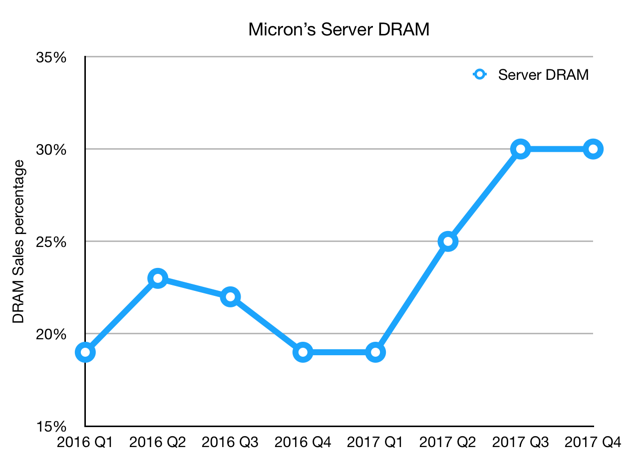 As we can see from the ending quarters of 2017, Micron has been strengthening their server DRAM segment. Going from 19% of their sales mix in server DRAM, Micron boosted it up to 30% in the last quarter of 2017, definitely a good step, especially since server DRAM products have a higher margin than mobile or PC DRAM products. Additionally the demand for server DRAM is much higher. Therefore, server DRAM became Micron’s most important business segment and as long as demand and prices stay strong, Micron will continue to generate massive free cash flow. So lets check with some of the customers, competitors, and industry researchers comments.

DRAM prices, especially for servers are high and it doesnt look like that trend is going to change. As an example, Dell (DVMT) one of the worlds largest server providers has advised its customers to expect price increases and delays of delivery times because of a global shortage of server memory modules. The global shortage is expected to delay delivery times by more than a month as well as increase the price of memory modules, which further confirms the strength of server DRAM. Jeff Clarke, Dells head of production and operations stated that the DRAMs price increase is the longest protracted that they have seen in the last 25 years. He also explained the amount of DRAM going into servers is increasing, and that now-a-days the amount going in is larger than last quarter which was also already more than the previous year, and so on.

Another piece of evidence for continuing strength in server and other DRAM products, comes from Trendforces latest weekly research report:

From the perspective of the market, DRAM suppliers have kept a greater share of their capacity for server memory products, which are generally seeing greater demand, higher gross margins, and higher profitability. Furthermore, first-tier DRAM suppliers will gradually start using their expanded capacity later, toward the end of 2018. Hence, prices of PC DRAM products will stay on an uptrend in 2Q18.

Another highlight from this article for Micron is the market share increase to 22.6% from 20.8% a quarter ago. This can be attributed to the fact that Micron had a noticeable larger price increase for their products than Samsung (OTC:SSNNF,OTC:SSNLF) and SK Hynix (OTC:HXSCF, OTC:HXSCL), which are two of Micron’s strongest competitors.

Another way to see what’s happening in the server DRAM segment is to look what Micron’s DRAM competitors have to say. In their latest report Samsung stated that for semiconductors, there was a strong demand for server and graphic memory products, and so the market conditions remained favorable. Most notably high-density server DRAM (32GB and higher) sales increased, while NAND shipments declined because of a weak smartphone market even though there was a strong demand for server SSDs. For the next quarter they expect that the demand for DRAM will stay solid, especially for server and mobile, and that the demand for NAND high capacity storage will strengthen as the prices soften.

So then what does SK HYNIX say about server DRAM sales and prices? In their latest reported they disclosed their PC and server sales make up 50% of their DRAM sales, and the demand strength continues so they adjust their mix towards the server products. They expect the price increase trend to continue. SK Hynix has a larger exposure in mobile than Micron with 35% of their DRAM sales.

Another interesting thing to look at, is how the DRAM share of microns total revenue has been changing: 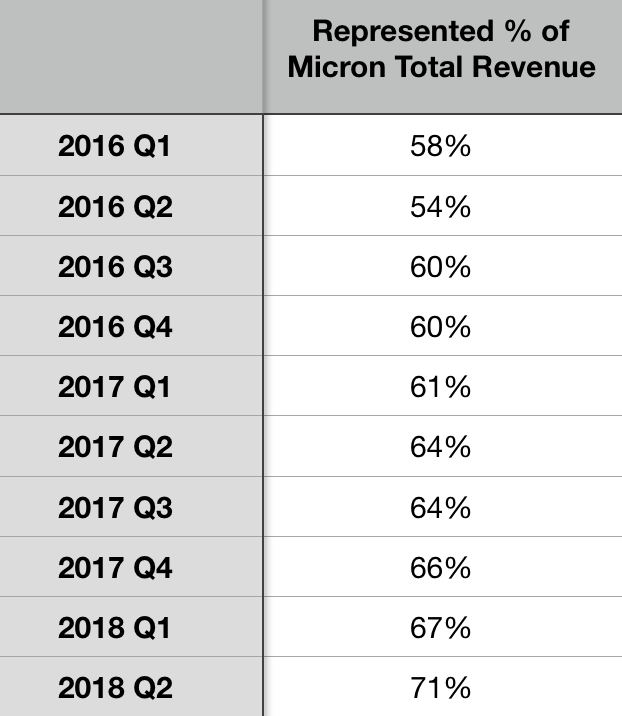 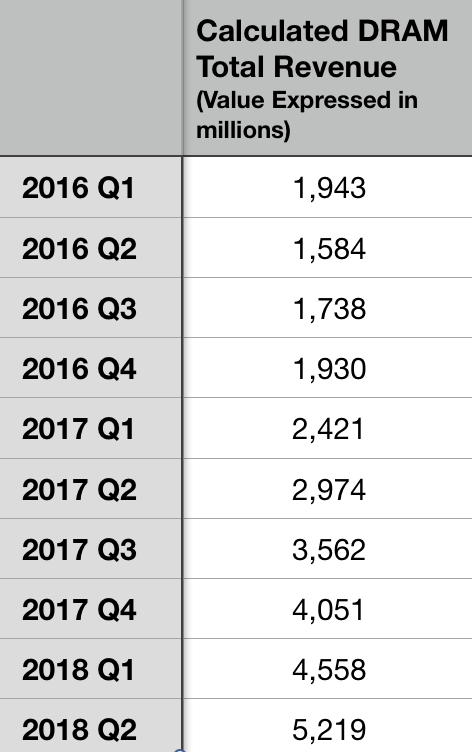 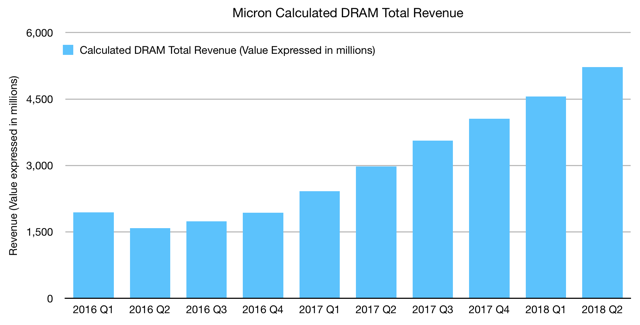 As long as DRAM sales, and the price of DRAM are going up then microns revenue should also continue the same trend.

Micron is working hard on a next generation DDR5 memory, which has double the bandwidth than the DDR4. Research and development programs like these show the DRAM evolution is not over yet:

Micron has begun shipping early DDR5 validation silicon to our ecosystem partners. This early sampling of DDR5 will enable the engineering efforts to validate IP and to build robust models and toolsets in the ecosystem; IO settings for optimizing “data eyes”; board layout validation; validate IP assumptions; and more. This is the first of many critical steps a memory vendor should execute to validate assumptions with the ecosystem to support the next baseline memory in order to build broader based solutions prior to delivering samples to customers.

3D crosspoint is another point of interest for Micron investors. In the first quarter report for 2018, President and CEO, Sanjay Mehrotra stated that they are continuing to make good progress with the technology, and since there is an increased focus on the high-value product solutions, they have now resourced a product development team to assist them with the opportunity ahead. He also believes they will continue to have the opportunity to sell their 3-D crosspoint output to their partner Intel (INTC) as the market continues to develop.

The biggest risk Micron faces is memory and storage prices decreasing too fast. This could be a result from excessive supply or a sharp drop in demand. Excessive supply could be from either of the three main DRAM suppliers, or from China if they succeed in their effort to enter into the memory industry. As Micron has noted in their most recent 10Q, in the past they experienced

Microns future success depends on their ability to continually develop and produce competitive new memory and storage technologies. They have no assurance that they will be successful in developing the new technologies, be able to successfully market them, or even if the margins generated from the sales will allow them to recover from the development efforts.

With server DRAM bringing in good revenue and constant free cash flow, Micron was wise to begin shifting their focus and production towards it. As long as the DRAM price hike continues, Microns revenue should continue the upward trend that it is in over the past 2 years, therefore memory prices must be monitored carefully. Micron generates large amounts of free cash flow which can be used for large shareholder return programs. If announced, this could attract new investors.

Disclosure: I am/we are long MU.