The management team at Chicago Bridge & Iron (CBI) threw investors for a loop when, on December 18th, news broke that the company would merge with McDermott International (MDR) in a deal with an enterprise value of $6 billion. This announcement has interesting implications for investors, but if synergies can be achieved as promised, the value proposition for shareholders is still attractive.

In its announcement on the merger, the management teams of both companies stated that CBI and McDermott would be combined into one entity in an all-stock deal. Shareholders in CBI will receive 2.47221 shares of McDermott for every share of McDermott outstanding (0.82407 shares if you adjust for McDermotts planned share split). With a closing price for McDermott of $7.59 on the day the deal was announced, this implies a price for CBIs investors of $18.76 apiece, a premium of 4.7% over CBIs closing share price of $17.92.

CBIs investors will own 47% of the consolidated entity, while McDermotts investors will keep the remaining 53%. Total stock value for the deal is estimated to be $4 billion. Previously, CBI had planned to sell off its Technology segment in a deal valued in excess of 10 times that segments EBITDA (or between $2 billion and $2.4 billion) and pay down essentially all of its debt with the proceeds, but this is now off the table. Instead, management has said that this segment will be absorbed into the merged business.

To fully appreciate what CBI has agreed to do, we need only look at the image above. In it, you can see where the two entities overlap and where they are distinct from one another. CBI is, primarily, a firm focused on the onshore E&P and related space, while McDermott is an offshore operator. The image below shows the degree of vertical integration created as a result of this transaction, effectively forming a major full-service provider for oil, gas, and natural gas liquids firms ranging from fabrication to energy processing.

Today, McDermott is focused largely on operations outside of the US. 98% of its revenue comes from areas outside of the US. This compares to 23% of revenue for CBI. The end result will be a business that generates 45% of its revenue from outside the US, with the remaining 55% from here at home. Whats more, the blend between the enterprises will result in a firm that is 71% onshore in terms of focus as opposed to the 100% offshore focus reported by McDermott and the 100% onshore focus of CBI.

McDermotts getting the best side of the deal 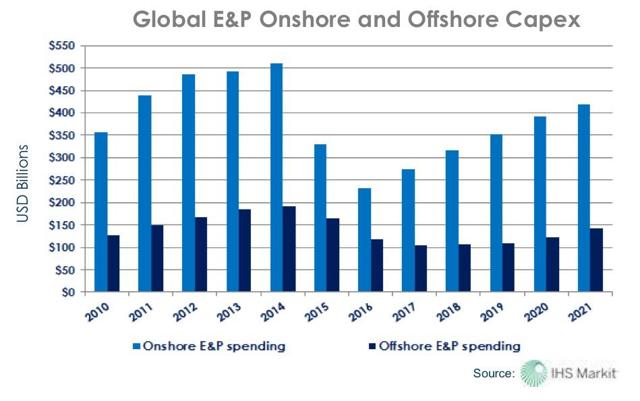 In its latest investor presentation prior to the deals announcement, McDermott provided an interesting graph for its shareholders to look at. In it, shown above, you can see projected E&P capex spending for the world through 2021 and dating back to 2010. If these figures are correct, onshore spending should grow from around $235 billion in 2016 to $420 billion in 2021. Thats an increase of nearly 80%. Offshore spending, on the other hand, will see less than a $50 billion increase during this timeframe and will still amount to less than $150 billion per year. It will take until 2026, as you can see in the image below, before offshore capex spending among E&P firms touches the $200 billion range. 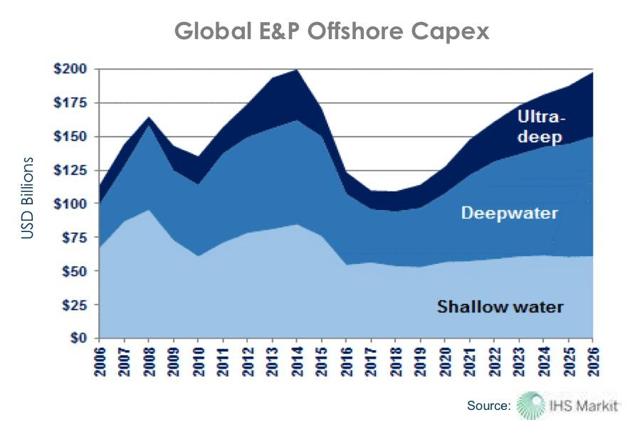 Beyond the opportunity for faster growth, theres another major benefit McDermott is getting: Strong earnings potential. In the graph below, you can see net income, operating cash flow, and free cash flow for both CBI and McDermott over the past decade. Both firms have had their rough spots, but CBIs troubles are largely behind it thanks to asset sales. For McDermott, performance has been depressed since 2013, especially in the area of backlog, which fell from $4.32 billion at the end of 2016 to $2.43 billion this year, but with net income up from a loss of $508.87 million in 2013 to a gain of $34.12 million last year, its slowly climbing out of its hole. 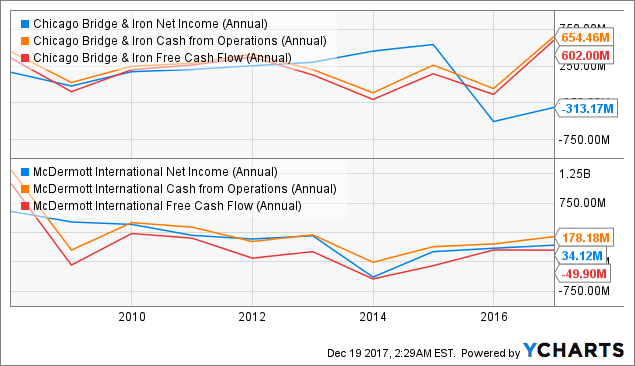 This improvement by McDermott bodes well for CBI and its shareholders, but lets look at recent financial data up close. In the table below, you can see select financial measures for both firms over the trailing 12 months or what exists currently (depending on the metric). CBIs earnings over the past year have been impacted largely by problem contracts, but if you adjust for those (since the firm appears to be mostly out of the woods), youll see that its adjusted net income over the past year has been $375 million. This is more than double the $159 million reported by McDermott. CBIs balance sheet is worse, particularly with regard to leverage, but for an entity that will generate 70% of earnings moving forward to receive 47% of the equity is unbalanced.

I would have preferred that management sell off the Technology segment like they had planned and for CBI to run as a standalone EPC and services business. However, just because they are not going this route and just because McDermotts shareholders are getting the better side of the deal does not mean that CBI is no longer appealing. According to CBI, they are well on their way to generating $100 million in cost savings that should take effect next year. This, when applied to adjusted net income over the past year, means that the company, without the merger, would be trading for 3.8 times profit. Even if the firms cost savings do not materialize as management claimed, shares are going for a cheap 4.8 times earnings. Earnings should, in the long run, approximate operating cash flow.

A significant claim being made by CBI and McDermott is that, by combining into one entity, the firms should generate synergies of $250 million in 2019, but this will cost investors $210 million between 2018 and 2019. This figure is on top of the $100 million in cost savings projected by CBI. Factoring these into the picture and considering the current market capitalization of both firms means that, if all synergies are achieved, the consolidated enterprise should be worth 4.5 times adjusted profits. Without the $100 million in savings from CBI, that number rises to 5.1 times.

This spread is higher than CBI as a standalone firm, but there are some positives to paying more for the stock. A stronger balance sheet from McDermotts side with a debt/equity ratio of 0.31 compared to CBIs 1.65 and a current ratio of 1.70 compared to CBIs adjusted current ratio of 0.88, is one. The retention of the Technology segment is also a benefit because management has demonstrated attractive growth and margins there over the years and that trajectory will likely continue. If, however, those synergies do not materialize, the end result will be significant value impairment for CBIs current investors. Without any of the $250 million in savings, the consolidated company is going for 6.3 times adjusted earnings. This represents value impairment to CBIs investors of between 23.8% and 39.7%.

I did not anticipate CBIs move here and I would have preferred that management follow the path they had outlined for investors from the start or that they had gotten more of the combined entity than they ultimately were able to. That said, this merger is not the death of the value proposition for CBI. If projected synergies can be achieved, investors in the company are just marginally worse off with the consolidated entity than they would have been with the firm remaining independent. Retention of the Technology segment, combined with a more robust balance sheet, should help to fill in the value gap at least partially, but whether or not investors in CBI will get hammered will depend on the realization of synergies between now and the end of 2019. For those who believe in the management shakeup that will be happening thanks to this transaction, now might still be a great time to buy in.

Disclosure: I am/we are long CBI.

About this article:ExpandAuthor payment: $35 + $0.01/page view. Authors of PRO articles receive a minimum guaranteed payment of $150-500.Tagged: Investing Ideas, Long Ideas, Industrial Goods, General ContractorsWant to share your opinion on this article? Add a comment.Disagree with this article? Submit your own.To report a factual error in this article, click here